I've been thinking a lot about meanness lately. I'm sure it's the Trump-Cruz-Rubio fiasco that's fueling my meditations. But the whole thing has gotten me thinking more generally about the many flavors of meanness, and about when, why and how people decide to be mean to each other. It's a slippery term, meanness. Not even the online dictionaries can quite pin it down. Oxford English defines it as "unkindness, spitefulness or unfairness; aggressive character; viciousness." Cambridge leads with its material qualities, "the quality of being unwilling to give or share things, especially money." Merriam-Webster's is my favorite in the way it builds an entire character sketch into the definition: "the desire to cause pain for the satisfaction of doing harm." In the back of my head, I hear Flannery O'Connor's Misfit (the anti-hero of A Good Man is Hard to Find) confirming this definition: "no pleasure but meanness," he says, just before he shoots the grandmother with whom he'd been discussing the theological implications of Jesus raising the dead.

The Merriam-Webster definition is followed by a long list of synonyms and an even longer list of related words. It seems, in this context, that there is no shortage of the ways "the desire to cause pain" manifests itself. But clearly, all meannesses are not created equal. There's got to be a world of difference between the Misfit's kind of meanness, his pure sadism, and the myriad other ways people hurt one another, whether through public humiliations, good old-fashioned politics, calculated attacks or sheer thoughtlessness. Some meannesses are less deliberate than others, some crop up organically, wills-to-power writ large or small, or acts of desperation, or self-preservation. Even the Misfit's seemingly transparent sadism is complicated by his accompanying despair. No pleasure but meanness, perhaps, but I'd wager his is a fleeting pleasure at best. At least, I'd like to think so.

In any case, I find that it's hard to write convincingly against meanness. Not because I want to champion meanness in any way, but because the language of, well, anti-meanness has always seemed to me to have the ring of the Pollyanna, of platitudes, of wide-eyed idealism. It's just not the stuff of good writing. Good thinking, yes. Good living, definitely. But not good writing, which needs the pull of cynicism to give it its power. Or so it's always seemed to me. 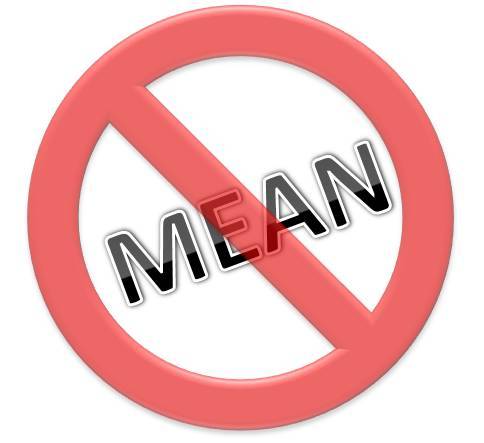 There's a man who works in the diner my family goes to most Sundays. My kids think he looks a bit like Dumbledore. He does, with his long, near-silver beard. The first few times we went to the diner, we ordered our meals, traded jokes and pleasantries, left a nice tip. Gradually, we started to learn more about him: how he grew up down the road, played hockey in high school for the team, worked for years at the diner. He told us the stories behind the photos--of the posed smiles and candid moments of the diner's owner's family--underneath the glass on our table. Eventually he told us about how he recently took eight months off to bike across the US, with everything he needed hanging on his bike. And about how he'd wake up on Sundays, not sure which church to go to, but finding his way again and again to places where he could experience the towns he stopped in on their own terms. He told us about the Shabbat dinner he participated in--his first--on the outskirts of Indianapolis, about the random conversations he had with strangers, about what it was like to sleep alone fully under the stars. We hung on his words, inspired and rejuvenated by his expansive energy and his easy smile. The next week, he told us he'd taken an additional job, working with developmentally challenged young adults. "You're going to be so great at that," I told him. "Thanks," he said, "I have experience with my two sons." His smile, still easy, let in a glimpse of the pain behind it. This week, I asked him about the new job. "It's going really well," he said. "I'm so glad that I can still do this job, though, because this isn't like work at all."

What I'm getting at is this: there are ways of being in the world that counter meanness at its core. If the scope of meanness is many-flavored, it's still fair to say that the result always has something to do with dismissing, defacing, human beings. Destructions, both big and small. There's a legend in Jewish mysticism that has always resonated with me in the way that it counters meanness, in the way it warns us to not dismiss or deface one another. The legend goes like this: at any given time, there are 36 people living who, through their goodness, keep the world from crumbling. They're called the lamed-vovniks. But here's the catch: no one knows who they are, not even the lamed-vovniks themselves. They're hidden. They don't know they've been tasked to mend the world--their humility keeps them from knowing this--and, so, the rest of us need to be on the lookout for them, listening closely to one another's stories, acknowledging goodness when we experience it.

I'm the most secular of Jews, and theology feels like claustrophobia to me, but I like this legend, this simple blueprint for the anti-mean. When it comes down to it, these people, the lamed-vovniks, aren't really hidden: we know when we're in the presence of someone who lifts us up, who gives us hope in the possibility of a human community, who erases meanness as an option, who restores instead of destroys. It's called generosity of spirit. It's tangible. And it's a quality worth emulating.

Pollyanna? Maybe. But with all that meanness swirling around, it seemed to me worth trying to write about...