Sexuality is a matrix of sexualities, and not a continuum between gay and straight.

When considering sexual orientation, the gender of the partner is almost always the defining issue, but other factors collide with sexual attraction and orientation? A recently published paper by Dr. Michael Seto suggests that the age of the sexual partner may be as stable an element of sexual orientation as gender.1 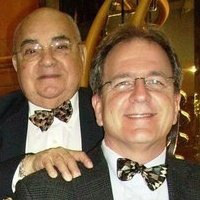 Seto uses the term chronophilia to describe a preferential treatment of certain age categories. Seto's research focuses on men because, as he says, there is almost no research on chronophilias in women.

Seto does not limit age to the chronological age but includes physical and sexual maturity as components of age. Sexual age is reflected in body size and shape, secondary sexual characteristics, and other visible signs of age such as wrinkled skin and white hair. Seto also incorporates psychological features of maturity such as intelligence, kindness and an agreeable sense of humor. In Finally Out: Letting Go of Living Straight, I wrote about this as "Men with Rounded Corners."

In researching for my book, I interviewed a large number of younger gay men attracted to older men, and I found some common themes:
• A large majority believed they have always been attracted to someone at least fifteen years older, and as they age, that age difference in their attraction persists.
• They were about equally split between those who had a good relationship with their father and those who had a bad or no relationship with their father.
• Demands are often made of the younger man to explain his attraction to an older man; older men were rarely asked to defend their choice.
• Young men resent any implication that they are seeking to exploit the older partner, i.e. a "sugar daddy," or being considered the older man's "trophy."
• Many were or had been in enduring relationships.
• Frequently as the older man has grown frail, the younger partner had become the primary care provider.
• The younger man explains his attraction with words like wisdom, experience, and sensitivity but also in more erotic terms.

Huge gaps exist in our knowledge of maturity as it relates to sexual orientation. Age has been a studied aspect of sexual orientation but almost exclusively in the context of pedophilia. Seto writes, "I am not aware of any empirical research on individuals attracted to middle-age [or older] persons."

How often does age factor into sexual attraction? Although younger/older relationships are atypical, they are not as unusual as commonly believed. A study of pornography gives us a window into the hidden world of sexual desire and sexual fantasy. Attraction to an older man or woman is common enough for the Urban Dictionary to have an entry for DILF (Dads I'd like to f***)--a crude but specific term--and a Google search for DILF turns up nearly 1.7 million hits, including heterosexual, homosexual, and bisexual references.

If you wish to filter your search further, Google recommends searching for naked DILF, gay DILF, black DILF and monster DILF. "Tumblr" has categories for dream daddies, hot daddies, and bear daddies. "Silver Daddies," one of the largest intergenerational chat sites for gay relationships has over 155,000 profiles from a wide variety of countries and cultures.

The American Psychiatric Association does not define atypical sexual interests such as chronophilia as a disorder unless it causes personal distress, causes another person psychological or physical injury, or involves a person unwilling or unable to give legal consent.

Alfred Kinsey, in Sexual Behavior in the Human Male wrote: "The living world is a continuum in each one of its aspects. The sooner we learn this concerning human sexual behavior, the sooner we shall reach a sound understanding of the realities of sex."2 Sexuality is more of a matrix than a continuum.

The reasons for our sexual attractions are analyzed obsessively, imposing an undue emphasis on categorization rather than accepting the great diversity of same-sex attractions. But the act of categorizing these atypical sexual attractions does not mean that acting on them is either legally or morally acceptable.

Explanations for all the elements of our sexual attractions are complex and probably unknowable, but when research on sexuality focuses exclusively on gender--to the exclusion of considerations of attraction,