The U.S. Department of Justice is considering suing Apple and five large U.S. publishers for allegedly colluding to raise the price of ebooks.

At the heart of the issue, I suspect, is concern over the agency pricing model. Agency pricing allows the publisher to set the retail price of their book.

Retailers don't discount agency books. Retailers earn a commission of 30 percent of list price for acting as the seller's agent, and then the seller (in this case the author, publisher or distributor) earns 70 percent of the list price.

When Apple launched its iBookstore in early 2010, it brought with it the agency pricing model. Large publishers, eager to find a white knight counterbalance to Amazon's then 90 percent market share in ebooks, embraced the agency model with gusto. Concurrent with the launch of Apple's iBookstore, five large publishers held a gun to the heads of all the ebook retailers: Give us the same agency pricing terms or we'll stop supplying our books to your stores.

Retailers at the time were none too-pleased with the ultimatum. In the end, all the retailers relented rather than risk losing access to these bestselling books.

Two days ago, I had a conference call with the Department of Justice. Although my company, Smashwords, is not a party to this potential lawsuit, I felt it was important that the DoJ investigators hear the Smashwords side of the story, because any decisions they make could have significant ramifications for our 40,000 authors and publishers, and for our retailers and customers.

As background, Smashwords was among the first distributors selected by Apple to supply their store with ebooks. On day one of the iPad's launch in early 2010, over 2,000 Smashwords ebooks were live in the Apple iBookstore. In the two years since, we have grown to become one of the world's largest distributors of ebooks from self-published authors and small independent presses. In addition to Apple, we supply nearly 100,000 ebooks to Barnes & Noble, Sony, Kobo, the Diesel eBook Store and Baker and Taylor. Since late 2010, we have distributed exclusively under the agency model.

My goal was to express why I think it's critically important that the DoJ not take any actions to weaken or dismantle agency pricing for ebooks. I shared with the DoJ new, never-before-seen pricing data that casts doubt upon the meme that agency pricing leads to higher consumer prices. I'll now share this same data with you now. 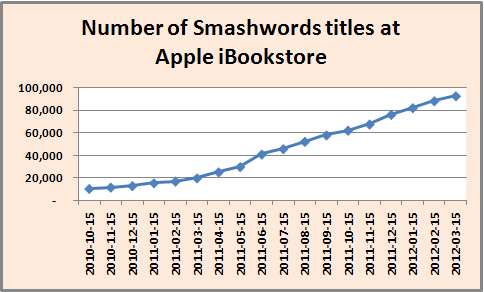 In preparation for the DoJ call, we assembled once-a-month snapshots of the Smashwords catalog at the Apple iBookstore between October 2010 and March 2012. Our data captures the average price of our titles in the iBookstore, and the number of titles listed.

I'm sharing four data sets. The first data set, at left, shows the number of Smashwords titles for sale in the Apple iBookstore. As you can see, the numbers have grown steadily. I'm not aware of any other agency pricing study that analyzes such a large body of data. 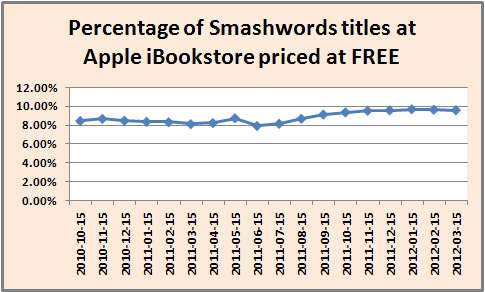 In the next data set, we plotted the percentage of books priced at FREE by our authors and publishers. Apple, like several other retailers, happily carries free ebooks, most of which are supplied by indie (self-published) authors and small presses.

Why would authors and publishers give away complete books when they have the power to price at any price? The reason is because FREE is a powerful marketing tool for platform building, and for introducing new readers to an author's backlist. 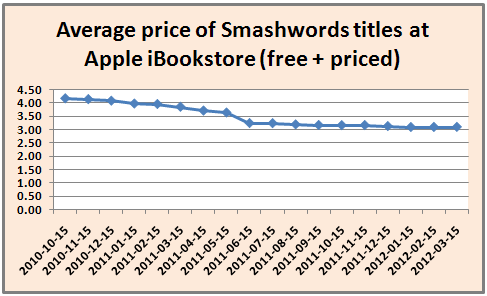 In the next chart, I aggregate all books, both FREE books and priced books, to calculate the average price of the books in the catalog.

You might wonder how an author can possibly earn a respectable income selling a $3.00 ebook. The answer lies in the agency model. Under agency, an indie author earns 60-70 percent of the list price as their royalty, so about $2.00. To earn that same amount of money as a traditionally published author, the ebook would have to be priced over $11.00 (large publishers pay their ebook authors 12.5-17.5 percent of the list price as royalty). 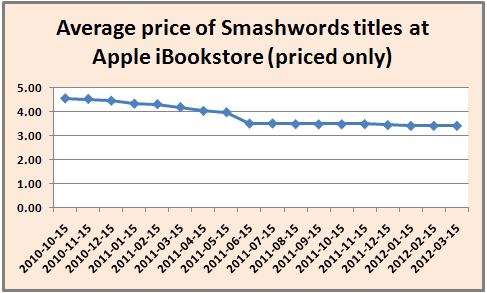 In the next data set, we removed the free titles to identify the true average price for priced books in our catalog at Apple.

Ebooks, combined with the agency pricing model and the power of self-publishing, allow indie authors to set lower prices yet still earn more per unit sold.

Back in 2009, here at The Huffington Post I wrote a blog titled, "Why We Need $4.00 Books." I called on publishers to drop ebooks to $4.00 because I thought ebooks could enable the profitable delivery of low cost books. That day arrived for Smashwords authors and publishers a year ago.

The $3.41 is a really interesting number, for a couple reasons:

Over the last two years, my appreciation for the agency model has grown as I've come to fully understand its benefits for our authors, publishers, retailers and customers. Here's why I support agency:

As I explained to the DoJ, I think it's fallacy to believe that agency pricing leads to higher prices. That's like blaming cars for drunk driving accidents. The driver behind the wheel is responsible. If the Big 6 publishers are pricing their books too high (and I think they are), blame the publishers.

It's also fallacy to believe that somehow the wholesale pricing model (where retailers are allowed to discount) is the savior and enabler of low prices. Under the wholesale model, the publisher has always set the price at which they'll sell the book to the bookstore, typically a 50 percent discount to the suggested list price. The $30 front list hardcover you purchase earns the publisher $15, or less. If the publisher decides they need to earn $18.00 on each copy sold, they'll set the suggested list price to $36.00. If one agrees that under normal circumstances, most retailers cannot consistently sell all their books at below cost, then it's reasonable to conclude that even under wholesale, publishers already control the minimum price that all customers, on average, will pay.

Ultimately, regardless of pricing model, lost in the debate over agency vs. wholesale is this simple fact: Customers will decide what they will and will not pay. If the customer believes the publisher set the price of that James Patterson title too high, they'll spend their dollars on lower cost alternatives.

In this highly competitive ebook marketplace, the rules of supply and demand are at play. Despite burgeoning demand of ebooks, the growth of supply is outstripping demand, forcing authors and publishers to compete on price. This is why prices will continue to face downward pressure under the agency model.

In the old world of five years ago, before ebooks were a factor, large publishers controlled the printing press and the access to brick and mortar distribution. It was an oligopolistic environment where a handful of large publishers held incredible sway over the supply and distribution of books.

In the new world of ebooks, large publishers are losing their grip. The printing press and distribution are now democratized. Any writer, anywhere in the world, can now instantly publish an ebook, and within days or weeks have their book available for sale in all the major ebook stores.

I seriously question whether Apple and the big five publishers colluded to raise prices. I think this was simply a matter of Apple inventing a superior pricing model that gave publishers the freedom to set their own prices.

That publishers set their prices too high should not be a matter of concern to the DoJ. As our data indicates, the Darwinian forces of free market consumer behavior will decide book prices over the long run.

For additional statistical analysis and commentary, see my blog where you'll find a longer version of this post.