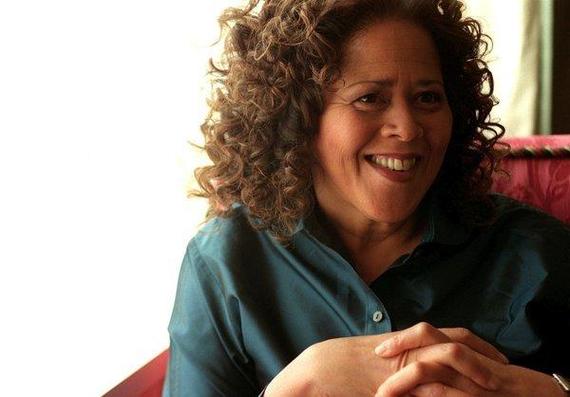 Humanities, the arts, words, culture, character, the language that people really speak when they speak to each other -- oh, these are creatively deep waters for somebody like Anna Deavere Smith to swim through. The acclaimed actress-playwright-professor, perhaps best known for her television roles -- Nancy McNally on The West Wing and Gloria Akalitus on Nurse Jackie -- ruminates about all this prior to her appearance as the featured lecturer at The 44th Jefferson Lecture in the Humanties for the National Endowment for the Humanities at the John F. Kennedy Center for the Performing Arts on April 6.

In an outing called, "On The Road: A Search For American Character," Smith will discuss and perform excerpts from her ongoing and quite fascinating documentary theater project, which, for more than 20 years, has turned heads, generated discussion and garnered praise for the brilliant way it transforms "the words of ordinary people into dramatic monologue." PBS Newshour's Jeffrey Brown oversees a Q&A afterward.

Smith's presence at NEH promises to be illuminating for a number of reasons. It offers an opportunity to look a little more deeply into the role Humanities currently plays in today's culture, but it also reminds us of Smith's one-of-a-kind ability to create memorable works that revolve around a number of social issues--from race relations to religion and healthcare.

There's something remarkable, in fact, experiencing Smith on stage, where she plays many characters who represent various points of view. Her shrewd journalistic skill and ability to evoke the souls of those she has interviewed rises beyond the ordinary theater experience. When, in 2013, Smith received the National Humanities Medal, which was presented to her by President Obama, it was well deserved and may have solidified her role as an Agent of Change among us. She has also garnered the MacArthur Award, The Dorothy and Lillian Gish Prize, two Tony nominations, and two Obies. To date, her works, "Fire In Mirror," "Twilight: Los Angeles 1992" and "Let Me Down Easy"--about healthcare in America--are some of the most nuanced, sobering awakenings of issues only a handful of creatives are capable of capturing with such depth. Her new work, some of which she will perform at the NEH endeavor, traces the school-to-prison pipeline.

Here, Smith opens more about the NEH event, the role of Humanities and much more.

Greg Archer: In NEH's orbit, there is a focus on the achievements exemplified by Thomas Jefferson. I wanted to begin there and get your thoughts about Jefferson and the organization itself.

Anna Deavere Smith: It's actually a great question, which I never thought to ask and now I will. I am not a historian, but through some of the research I did on Thomas Jefferson--and I actually performed him in my play "House Arrest," although I don't normally perform people I haven't heard speak--I think Jefferson's knowledge was vast. I asked one historian who spent her life on Jefferson, and I asked her, "Do you like him?" She said, "Well, if you sat next to him at dinner he would know everything about everything." And when you look at his interests--he knew everything from wine to slaves. Apparently, when he needed a carpenter, he picked out one who could play the oboe to fill out a particular quartet he was putting together. I don't know how Jefferson, and so many people of that time, managed to do all the work they did at so many levels--they didn't have cell phones, computers. And when you think about the Humanities, the idea of Humanities, it is a broad umbrella of knowledge--is this knowledge going to get me a job; is this knowledge going to build me a cabinet? But there's something about the actual joy of knowing things.

Greg Archer: Verbatim Theater and the importance of character, race, community and identity. This has been a major thrust in what you do. I am curious what lures you to be plugged into that particular socket?

Anna Deavere Smith: I started working like this and thinking like this in the late '70s based on two things. 1) Something my grandfather said when we were children: "When you say a word often enough, it becomes you." And 2) Because being trained classically and understanding that in Shakespeare if you say the words, it will take you to a psychological state in a character ... Putting those two things together made me very interested in how language works; and how is it that in Shakespeare, that by saying the words you can actually feel like the character? I decided: Why don't I study real people and study their words and see if I can learn something--what is the certain magic in that? I used to say to my students when I was a very young teacher that everybody sounds different. Nobody sounds like anybody else. Even a playwright writes a full sentence ... nobody talks like that. The language on the page is not the language being spoken so I was/am interested in what are the things that we can do the navigate it. I also grew up in a Black church [in Baltimore] where there was great oratory and great music ... and seeing the power of what something is beyond "What are the esthetics of a great speaker?"

Greg Archer: You have interviewed many people for your works. What makes a compelling interviewee?

Greg Archer: What do you love most about that process?

Anna Deavere Smith: Now I video the interviews. I never was able to do that, and I like to be in a situation where I can start the interview by saying, "What happened?" Saying, "Tell me more about that." You know, Wikipedia, where you're reading along and then there is something underlined and there's a link? That's what I think of those moments where I say, "Say more about that." It's getting that person to link in and hook me into something that's probably deeper than what they just said.

Greg Archer: For this event, you will be doing ...

Anna Deavere Smith: I'll start off with Studs Terkel--I'm crazy about Studs. He was somebody who was brilliant in his ability to say something profound in what appears to be very simple. And then I will do one of the people from my play, "Twilight," and then I will present new material I have been collecting on what I call the School to Prison Pipeline.

Greg Archer: Tell me more about that.

Anna Deavere Smith: There's become an increased awareness about the number of people who are incarcerated. I'm told that it's an issue where both Democrats and Republicans actually agree. The National Academy of Sciences came up with a 500-page report with so many questions: Should we be punishing so many people? What does it mean that we incarcerate more people than any other country in the world? Where do they come from? Sadly, some of them are young people who can't make it through school; can't sit through class; get expelled. Statistics have shown that these people who get expelled, sometimes for minor infractions, that when that circle starts, it's not just that that person is incarcerated, it's that the life and health of the communities are affected.

So, that's what I have been looking at. I have picked four geographic areas--a lot of interviews in Nothern California, Baltimore, Philly and then I'll be going to some place in the South. I don't know where. Hopefully some place I have never heard of and that you have never heard of, to see what's happening there in this rural community. And again, I'll be presenting some of this at this lecture before the work is ready. And why is that? Because I want this be a part of a conversation long before it's a--quote/unquote--finished work of art. Because I think this is something we need to wrap our heads around--we're losing talent; we're losing lives and how far can it go? How can we turn it around? That's not for me to answer. I am not a legislator; I am not an educator. I mean, I teach artists in elite institutions. But I hope in my small way to cause conversation about it and make my way toward people who are making differences.

Greg Archer: Let's discuss Humanities and the Arts these days. What's the best thing you see?

Greg Archer: Or, I could ask what are you most concerned about?

Anna Deavere Smith: In one way, everybody is always concerned about the arts dying and they never do. I think there's good reason to be concerned about Humanities just because Humanities are traditionally dwelled in schools and universities and we're changing the way we think about ways people need to learn or what we think they need to learn, and what needs to be a craft that needs to be learned, so ... [there's the thought:] why waste time on Shakespeare or Mark Twain for that matter.

I think we are in this moment where we need to think through that. I think Humanities is simply the world of ideas. We're at a crossroads. All of a sudden there's this economic matter--how is time best spent to learn what? And the concern about this remarkable technological revolution that you and I find ourselves in that has changed the world forever ... and the world in 25 years will be a world we don't even recognize. And how do we prepare ourselves? We are under a kind of pressure about what education should be; what human cognition should be. And I think the one thing Humanities can do is to help us always be there and talk about what does it means. That's what Humanities is there for--to help us understand: What are we doing? I've heard more than one person say to me lately, "What's going on? What's going on ... with all this technology? Do they know everything about us?" Or, "Wow, look at how they decide how many people are going to work at Walgreens? Wow, we don't understand." I think we'll always need that old, crusty Humanties as a kind of Wise Man in this journey to find that meaning.