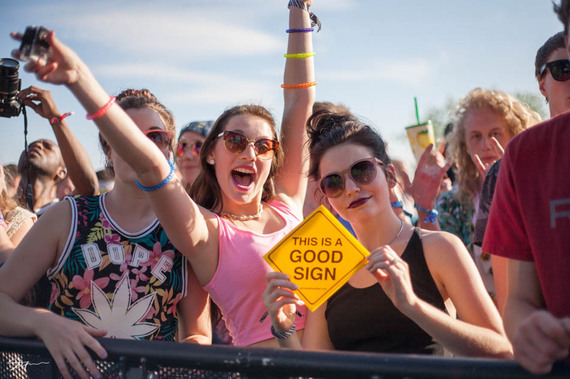 What does it take to be dubbed an agent of change? A good attitude, for starters. An enterprising plan of action that strives to unite the masses and/or raise the level of awareness about a cause or a certain pocket of society deserving of attention always helps, too. Take note of these remarkable five.

This Is A Good Sign
Is it possible to make the world a better place--one good sign at a time? Literally? Eric Dennis, founder of This Is A Good Sign Is betting on it. Five years ago, Dennis officially launched his company with a bold intention: to help people feel better, and combat the fear and division in the world, mostly with the assistance of a big yellow badge boasting the phrase "this is a good sign."

Initially, his desire was to help strengthen communities. However, now, somewhat remarkably, the endeavor has transformed into a worldwide movement focused on being positive. T-shirts and other merchandising entered the fold, too. So did a Pied Piper of sorts -- Kevin Lamb (6'7" Kevin)--who has been globetrotting, holding up the "good signs" at numerous festivals, concerts and other social events, as well as blogging and vlogging the Good Sign mission seemingly around the clock -- actually, locals near and far have jumped on this curious bandwagon of good, nabbing the signs themselves. "Nine years ago. I decided that it was totally possible for me to help improve the world through art, marketing and media," Dennis says. "When I started the Good Sign movement. I knew right away that this was my mission: Use Good Signs to bring more light into peoples lives and deploy a social aid to help good people to recognize one another more easily all over the world."

The end goal, Dennis notes, is to help people become more aware of others fighting the good fight and winning every day. "Anyone can help and it is possible to successfully affect great positive change in the world through individual and community action," he adds. Much of this came into being, too, as a way to offer levity to what the media broadcasts, which typically leans toward the sensationalistic and, well, "bad" news. By going good, Dennis et al, want to make a powerful shift in perspective. "There are plenty of companies addressing hunger problems in the world," Dennis asserts, "but very few addressing the very real issue of 'intellectual poverty'--the depression and social disconnect in the world caused by people absorbing too much negative information in advertising, marketing and media." In that respect, these folks are using their Good Signs to feed people hope where they need it most -- in their hearts and minds. The good news?

Good is contagious. Thisisagoodsign.com is currently generating more 120 million impressions and the goal is to hit 1 billion impressions annually by 2016. Up next: The launch of Good Sign Magazine and the Good Sign Awards. Both platforms are dedicated to giving the world's difference-makers the attention they deserve, Dennis muses. To expand its Good universe, for the first time, the Good Sign brand will be showcased at the Licensing Expo in Las Vegas for three days beginning June 9. Thus far, it only licenses its Good Sign logo to the most socially responsible manufacturers -- five current licensees include Smart Signs, Fathead, Original Retro Brand for T-shirts, Posterservice for posters and Roaring Spring for notebooks. Key strategic co-promotional partnerships with variety of music festival events around the country remain on the roster. In fact, Marcus Mumford of the band Mumford & Sons recently got into the picture, being caught on video asking for the popular Good Sign in front of a huge crowd in Ohio. The gang is currently holding an investment seed round taking place over the summer. A good thing. Learn more and get involved in the good here. 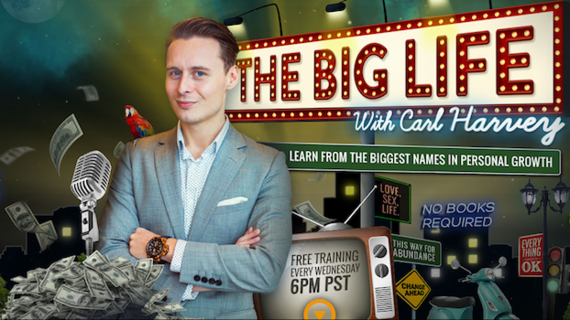 Carl Harvey's The Big Life
The weekly online chat show attracts some of the most prominent names in personal growth found on the planet--from "Chicken Soup for the Soul" titan Jack Canfield and Lisa Nichols to Paul Scheele and T. Harv Eker. Harvey's mission? To help his audience create and live a "big life," one filled with a glorious mix of purpose, passion, freedom and, everybody's favorite, abundance. Harvey is an engaging and soulful host. That his guests basically come as they are, sans limitations, all for a greater purpose to share some knowledge, is even better. In a cluttered radio and television world, where far too many opinions abound and all that talking head "noise" just seems über loud, it's refreshing to come across a talk show host with an authenticity that truly shines through. 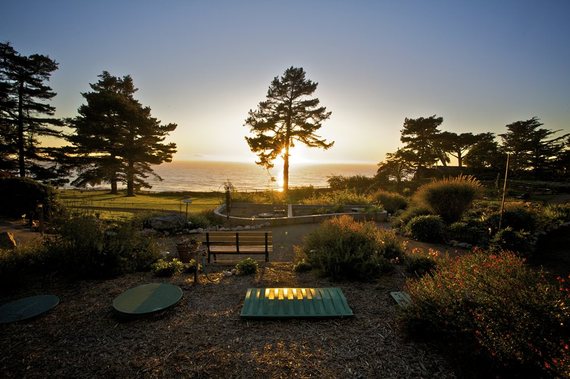 Esalen
It was given life back in 1962, its parents, two former Stanford grads, Michael Murphy and Dick Price, holding a powerful desire to break away from conventionality and create a portal where greater human potential could be explored and experienced. Since that time Esalen has emerged as one of the world's more vibrant outposts for personal transformations, which extend beyond the personal. Let's face it: Inner work is delightful (albeit emotionally jarring at times), but it's what you do with that inner work that ultimately matters in the bigger scheme of things. In other words: How do you make the best use of your transformations out in the world; how do you make shift happen happen out there? Through a vast amount of workshops annually and other educational programs--too many to list here--Esalen continues to thrive in this capacity.

Last month, it garnered attention when the locale appeared in the series finale of the period drama Mad Men -- nothing like watching Jon Hamm's Don Draper find some nirvana in the pentultimate scene there on the grassy knoll of Esalen. Beyond such historic exposure, the place is generating attention lately from millennials. Yes, the "younger" crowd, whose emotional baggage and worldly angst may not be as heavy as their predeccors. What go-getters these millennials are and my, how they want to change the world. (More on this in another report.) The other news, something that speaks to Esalen's Change Agent status, is a three-year renewal project, which includes upgraded facilities, greater levels of environmental sustainability, and expanding its already groundbreaking educational programs to what it calls "the personal seekers and cultural change-makers of today and tomorrow." The center's iconic Lodge is part of the renovation as are the beloved kitchen, dining area, deck, café, bookstore, and guest reception. A second floor with augmented meeting facilities and breathtaking views of the Big Sur coastline. Additionally, the renewal project will include the rebuild of other infrastructures. What's wonderful to note here is how, like the consciousness it strives to raise, Esalen continues to evolve remarkably well through the decades. 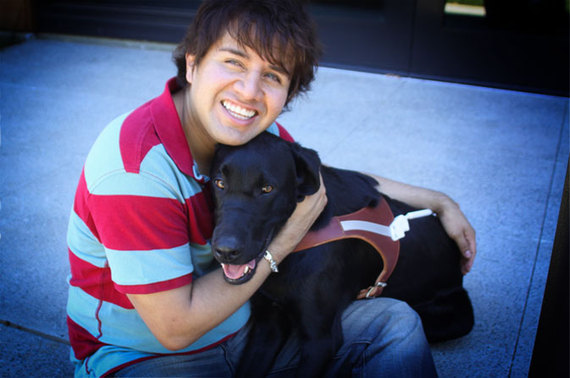 Belo Cipriani
A great deal has unfolded in the life of gay author/disability advocate Belo Cipriani since the release of his book in 2011, "Blind: A Memoir." The powerful read hit the bestseller list, thanks, in part, to the author's wonderful writing--raw, real, deep--but also for the story, which chronicled Cipriani's journey in the aftermath of a 2007 San Francisco hate crime that left him blind. Since then, he has become a tireless spokesperson for those with disabilities, specifically blind individuals, as well as an advocate for guide dogs. "Educating our population on disability issues will produce awakened generations," says, Cipriani, who was recently voted by Bay Area readers as 2015's Best Disability Advocate. He's collected a bevy of other awards for his efforts, 2012's best non-fiction Rainbow Awards among them. Even bigger news arrived just recently--Cipriani will serve as a Community Grand Marshal in the San Francisco Pride Parade on June 28. His participation is historic as he is the first blind grand marshal in Pride history. All that, and Cipriani's latest book, "Midday Dreams," which houses lessons about loving those who are "different," make this soul stand out among the masses; a lighthouse in an ever-changing sea of media, literacy and advocacy. 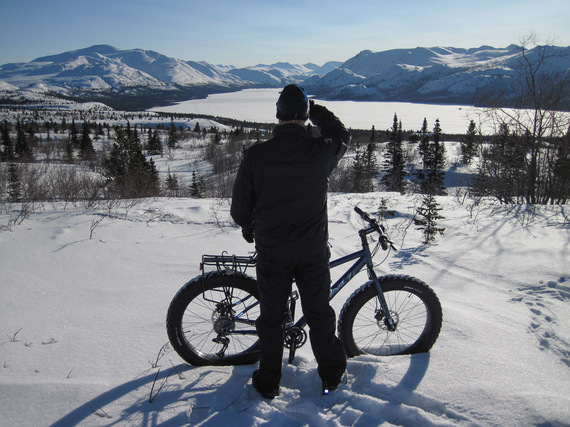 Sybirik Cycle Expedition Journey
Eight-thousand kilometers, eight countries, six months--on a bicyle? And all to mark the 75th anniversary of Polish exiles from the early 1940s? Now that's something that is just begging for a closer look. Seventy-five years ago, on Feb. 10, 1940, Canadian resident Ewa Dembeck's mother and her family, were deported to Kubalo (Kotlas region), Oblast Archangelsk. They weren't alone. Under Stalin's orders, nearly 1 million Polish citizens were deported from Poland and sent to the Siberian Gulags (some reports have that figure hovering near 2 million souls). What a great way, Dembeck thought, to honor the nearly forgotten and under-reported odyssey of her ancestors and their comrades who were sent to the Gulags, then to cycle a significant portion of their journey. Fellow Canadian Photojournalist/filmmaker Lee Carruthers came on board the endeavor last month and the two gave birth the Sybirik Cycle Expedition Journey. (Sybirak is the term for a person imprisoned or exiled to Siberia, including those Polish citizens specifically sent to Siberia, Arctic Russia and Kazakhstan in the 1940s.)

So, how does it all roll out? Thanks to corporate and private donations, the duo were able to hit the road in early May, beginning in Warsaw, Poland, and the goal is to follow, as closely as they can, the path of Polish citizens deported to labor camps across Siberia and Kazakhstan, as well as their journey to freedom. They have since cycled to Belarus and plan to hit Northern Russia (Kotlas area) and cross the Ural Mountains. From there, they will continue through Kazakhstan, Kyrgyzstan and Uzbekistan (Tashkent) to Turkmenistan (Turkmenbashi-Krasnovodsk). Once there, they plan to cross the Caspian Sea to Iran and finish in Tehran, where many Polish exiles settled, before being sent to other regions around the globe, including Eastern Africa and Mexico. There are other elements to this remarkable mission, too. In addition to investigating the communities and people along the route and share in their cultural richness and perspectives, they also hope to acknowledge and assist those who offered aid to the exiles -- mostly this will happen by giving back to charity in two of the countries the exiles escaped to -- Iran and Africa. The end date of the mission: November, 2015. At a time when the past, a vibrant generation of souls from whom we can still learn a great deal, and especially this particular segment of Poland's history, seems to be slipping away with little or no regard to the lives effected (the Poles) or proper justice brought to the instigators (Stalin, his henchmen and Stalin's overall legacy), Dembeck and Carruthers stand out for their breathtaking resilience. Here's to the four wheels and two remarkable hearts making it happen. Learn more here.