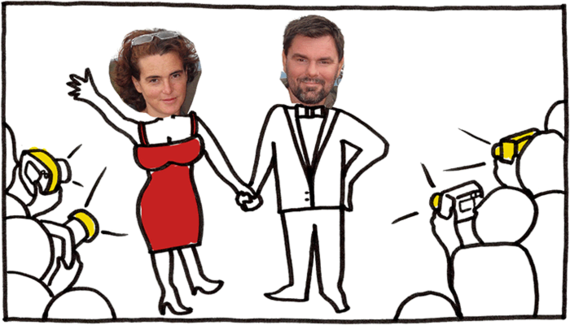 They walk among us -- those agents of change. Sometimes, we just need to be reminded of who they are. Take note of five luminous entities that strive to make the world a better place.

The F**k It Duo
Here's one to savor. They said F**k It to their jobs and moved to Italy years ago and in 2005, they created their first F**k It Retreat. Meet Mr. and Mrs. F**k It, John Parkin and Gaia Pollini (pictured above). Ten years have passed and since that time, the couple birthed the first F**k It Book ("F**k It: The Ultimate Spiritual Way"/ 2008/ Hay House). Additional F**k It literary siblings emerged. The books have been translated into 22 languages and have sold more than 400,000 copies. Workshops, retreats, one-on-one counseling, e-courses, and expanded F**k Its in London and Ireland have risen out of the fertile soil of the duo's F**k It imaginations. And then, in 2011, The Hill That Breathes (in Urbano, Italy), the fabulous F**k It locale, won Best European Retreat (Natural Health). The secret to this couple's undeniably unique success? F**k if I know. Well, I do. Somewhat. It's two words--and not those, by the way. It's these two: Let Go. Or, in this case, a more nuanced practice in the art of letting go by using a unique therapeutic tool: Profanity. Relax, it's not all swear words and then nirvana happens--not really. Although the couple's modality tends to lean toward being über fun if not laughter provoking. What was it a yogi once told me: "An anxious mind cannot exist in a relaxed body." The point is this: transformation may occur when you relax first, and then turn toward that thing you are so fretting over, breathe and embrace it--by saying F*** It of course. There's more to it, but you get the picture. Regardless, when you're on a mission to locate agents of change near and far, like I am, it's a treat to find these two doing so well, one F-Bomb at a time. 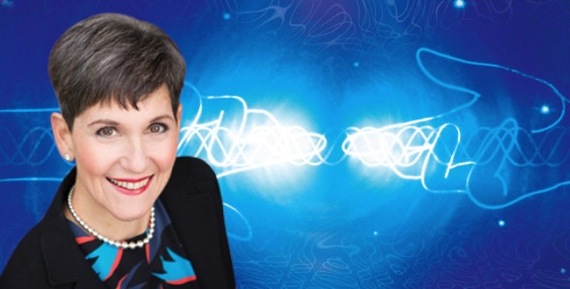 Lynne McTaggart and The Intention Experiment
McTaggart, a best-selling author, researcher and lecturer, is renowned for how well she creates a bridge between science and spirituality. Her books, "The Bond," "The Field," "What Doctors Don't Tell You," and "The Intention Experiment," each, on some level, rise beyond pedestrian trinket-acquiring "spirituality" and suggest that there is a more powerful field of energy within us and around us; that we are far more powerful and connected to each other than we were led to believe. But it's McTaggart's Intention Experiment which continues to draw significant interest. It finds the author/lecturer overseeing unique intentions en masse on the web, which have been called one of the largest mind-over-matter trials ever undertaken. By inviting like-minded souls together who can hold a singular vision for, say, peace in a certain region, can peace then be experienced in that region? That's the thrust behind the Intention Experiment--harnessing the intentions of thousands of participants on a specific topic. McTaggart first chronicled all this in her book of the same name, asking: "if we are connected, can our thoughts and intentions affect and change the world and things 'out there?'" Her compelling evidence suggests that the answer is, indeed, yes. Imagine then, what could happen if the entire populace of, say, New York City held a glorious intention for a set amount of time? What effect could that have? A powerful one me thinks. 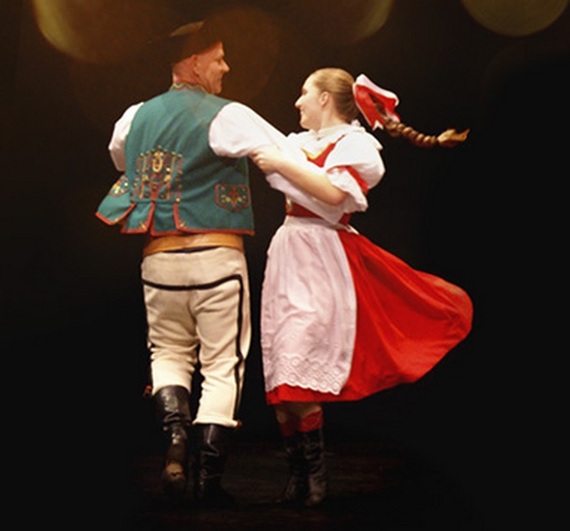 Polish Heritage Festival, Belmont, California
Poland has been making major headlines over the last nine months. Where to begin? There's the country's surprising economic boom and recent election--conservative challenger Andrzej Duda defeated the incumbent, Bronislaw Komorowski. And lest we forget the significant anniversary markers in 2014 and 2015--the former commemorated the 75th anniversary of the German and Russian invasion of Poland, as well as the Katyn massacre; the latter the mass deportation of Polish citizens by Stalin. A number of Polish organizations have been paying tribute to their heritage as well as their fallen comrades over the last year especially, and while each year ushers in a crop of Polish festivals throughout the Bay Area, this year, for the first time, the Polish community is being asked to come together for a larger event to be held in Belmont, California. This will mark the first ever collaborative event organized by several Polish groups. Sponsored by the Polish American Congress, co-sponsors include Polish Society of California/PNA Lodge 7, The Polish Club, San Francisco, Łowiczanie Polish Folk Ensemble of San Francisco and The Polonian Cultural and Pastoral Center (PCPC) in Sacramento. There is also an emphasis on the importance of the Polish-American Congress, which strives to meet the challenges facing Polish-Americans. Dancing, Polish cuisine, history and much more are expected to converge at the May 30 outing, but what stands out significantly here is the solidarity emanating from the groups that are bringing the event to fruition, especially at a time when Poland is wonderfully newsworthy. Learn more here. 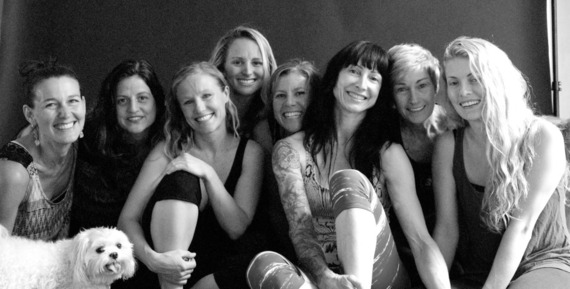 Village Yoga, Santa Cruz, California
As an author, travel writer and cultural moderator, I travel across the country for work on numerous occasions. I always make a point of dipping in to a yoga studio wherever I am. I have found some marvels in the likes of Bloomington, Indiana, and Kansas City, Missouri, and in an around California and then some. With thousands of yoga studios around the country, it's challenging to pick just one that stands out. But I did find one that flies to the top of the list for any summer travelers out there, and anyone who might be interested in knowing what makes a business really thrive. So, what makes this Bikram Yoga portal in Santa Cruz, California--a mecca town for yoga studios by the way--rise above the others? What about the popular Funky Door in San Francisco? Or Chicago's 105F, which offers a spirit-enhancing Gong Bath from time to time? Or any others for that matter? The answer rests in the title perhaps and, to me, it hearkens back to the old saying: "It takes a village." Founded by Sally Adams and Amy Mihal in early 2001--the two women had big followings at San Francisco's popular Global Yoga, founded by the remarkable Mary Jarvis--the studio has evolved into a vibrant mini community center on some level, with workshops, body work, coaching, nutrition, skin care and, well, plenty of yoga. Beyond its Bikram offerings, there are Vinyasa classes, as well as Yin/Restorative, a silent class and meditation. All that is good, however the main thing that stands out here is how well the owners nurture their clientele and, without much effort it seems, lure them in to participate in their ever-expanding enterprise that trickles back into the community. The works of local artists and photographers can often be seen on the walls. Locals are also invited to speak at workshops--think Oprah's Soul Sunday series in a more relaxed environment. Encouragement abounds. You feel it the moment you walk in the door. And let's face it, for any of us who are spiritually inclined and have done something like yoga or meditation, it doesn't take much to actually pick up on the vibe of a place. Good juju exists here and the ripple effects are felt outside the door. Fitting, because what was it I once heard? True yoga takes place off the mat. Here's to bending a little--or, in this case, a lot. 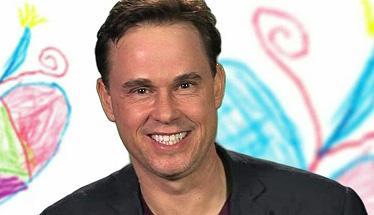 Robert Holden Ph.D. / Shift Happens
Folks may recall Holden's PBS special Shift Happens! or his two BBC-TV docs on happiness. An author of numerous books--"Happiness NOW!", "Shift Happens!", "Holy Shift!" and his latest "Life Loves You," co-written with "You Can Heal Your Life" maven Louise Hay, Holden's approach to living a more balanced, vibrant life has been well received, to say the least. His book "Shift Happens" morphed into a popular weekly Hay House Radio show, which has now attracted an impressive posse of motivational speakers and new thought agents--from Esther Hicks and Dorene Virtue to Norman Shealy and Caroline Myss. The intention here is offer listeners an opportunity to tap into their own power more fully and step into life in new ways, creating a remarkable transformation. Change they say, is not often easy, but for those us out there that want shift to occur, it's refreshing to know that we don't have to go at it alone. Here's to Holden's thoughtful approach and the impact it generates.

Shut Up, Skinny Bitches!: The common-sense guide to following your hunger and your heart
by Maria Rago PhD, Greg Archer