The cast and executive producers of Marvel's "Agents of S.H.I.E.L.D." took the stage at the Television Critics Association Summer 2013 press tour to declassify more intel on ABC's anticipated comic book series, a show which apparently stemmed from the desire to find a way for Clark Gregg's character, Agent Phil Coulson, to return from the grave after the events of "The Avengers."

Gregg admitted that he'd felt a certain finality after a "certain Asgardian fellow" impaled his character during the blockbuster movie. "I made jokes ... 'Is there a rewrite coming?' And it was really clear that I was dead. I had a great run and I thought what Joss did with the character was a magnificent resolve." Then, writer-director Joss Whedon called him five months after "The Avengers," promised him that Coulson's return wouldn't undermine the reality of the movie, and after hearing Whedon's plan, Gregg said, "I was very on board."

Executive producer Jeph Loeb added, "There was never going to be a show called 'Marvel's Agents of S.H.I.E.L.D.' without Clark. That's the way it started ... 'We know we want Clark; how do we start there and move out?' And then Jed and Maurissa and Joss came up with all these wonderful characters that are aboard the bus and will take us each week to a brand new epic adventure."

Loeb also reiterated that "Marvel is one universe" across its mediums -- publishing, games, TV shows and movies -- and that they'll "try to follow the continuity as best [they] can," relying on fans to tell them if something contradicts something else they've released.

Still, Loeb emphasized that the series is for both newcomers and existing fans of the Marvel universe. "Our hope is that everyone who is watching TV at 8 p.m. on Tuesdays is watching our show."

Executive producer Jeffrey Bell agreed, "We hope this is big and broad enough for everybody, but that there are specific things that Marvel fans will recognize."

Whedon said that, in terms of synergy between the series and the Marvel cinematic universe, "There will be as much as we can allow. We're still working that out. It's a fluid process. The important thing is it’s a fun opportunity, but it’s not the reason behind the show. We don’t want just to be an Easter egg farm. We want people to come back because of these people and not because of some connection to the movie universe. This show has to work for people who aren’t going to see those movies and haven’t seen them before."

The series has an admirably cinematic look and scope, something that Bell said resulted from the experience of the writers, director and behind-the-scenes crew. "Both Marvel and ABC have been very generous with us. We have a responsibility to Marvel to look awesome and terrific," he said. "But really, it's these people and their lives that we hope you'll come back to every week."

Although fans will inevitably be lured by Whedon's signature wit and one-liners, showrunners Maurissa Tancharoen and Jed Whedon wrote one of the pilot's most hilarious scenes, which bodes well for the show when Joss steps back to focus on "The Avengers: Age of Ultron" sequel.

"I got the best writers I know to do this and and actors who can do pretty much anything so that I could do less -- that's always the way to run a show," Joss admitted of leaving the series in his brother and Tancharoen's hands.

Joss also praised Marvel and ABC's lack of notes. "We've gotten trust, which is different than freedom ... My collaboration with the with Marvel on the movie was pretty extraordinary and, for me, unprecedented. It wasn’t a question of them getting out of the way. We really worked that story together. ABC and Marvel have been very active in making sure the show is what they want for their company and their network and their audiences and, at the same time, very supportive of the vision that we first laid out to them. The most important thing is that we all are trying to make the same show. It’s not really about 'Oh, we’re past them, and we don’t want have to deal with them.' We’re all on the same page, which has occasionally not happened to me [in my TV work]," Joss noted.

"They wanted to make sure our investment in characters and their interaction and their evolution was as big as the case of the week. They wanted to make sure that people were coming for the recurring story, as well as for the story that would conclude in a single episode, which, to me, is how I’ve done all of my shows. So they basically said, 'Would you please do it that way that you do it and not learn a new skill?' And that made me very happy."

Still, Joss said that he planned to be involved "as much as an executive producer can who's also making a movie."

The show features a diverse cast and an array of accents, including Scottish actor Iain De Caestecker, and English Elizabeth Henstridge, who pointed out that their different nationalities contribute to the authenticity of the group: "This is a team of misfits coming together," she said. "None of these people are home and they're finding their home with each other."

Gregg added, "As someone who has been working for S.H.I.E.L.D. for some time now ... one of the things that always excited me about S.H.I.E.L.D., both in the comics and in the cinematic universe and now the television universe, is that it's a transnational organization that's protecting humanity and bringing different parts of humanity together in the wake of 'The Avengers,' and so that always felt very organic to what S.H.I.E.L.D. is."

The producers also plan to film internationally to add to the global scale of the organization.

Joss is no stranger to writing about outcasts and misfits, and admitted he was attracted to "the idea of the people who don't have the superpowers; who didn't get the hammer; who didn't get the super-soldier serum; the idea that everybody matters ... the underdog, the common man. Clark was that sort of audience proxy in the movies, and the show is about that sense of, 'What about the rest of us? How do we cope with this?' It's television, so they're incredibly good at what they do and ridiculously attractive, but they still don't fall under the category of super."

He added, "I'm always interested in people who are in very pressure-cooker situations that are not necessarily world famous for it. I like the people who are on the fringe of things. We have this organization, we have the history from the comic books, but these guys are out there by themselves. It's going to be both an advantage and real trouble for them. We can bond with them in a way that they don’t have every resource, and they don’t have the answers [thanks to some] deus ex machina at the end of every episode: “Here comes S.H.I.E.L.D. to solve it.” It’s up to these guys. And that’s what really makes a group bond, and that’s the sort of thing I like to write."

Jed described the format of the show as facing a "challenge every week ... and hopefully the characters will be dealing with each other enough that there's stuff to weave into these standalone episodes."

Joss promised, 'Every week, it's not going to be some new hero; there could be a device, a mystery ... There are so many aspects to what's happened since everybody in the world found out there's a superhero team and aliens that invaded New York." He added that he was excited to dig into "the spy stuff, the hero stuff, the heartfelt stuff," so that "every week ... feels a little different."

Joss noted he could neither "confirm nor deny" whether "Angel" alum J. August Richards would return after the pilot, but, he said, "I thought he was great too, so do that math."

Unlike some of "Buffy" and "Angel's" more surreal installments, Joss officially ruled out a musical episode on "S.H.I.E.L.D.," but admitted that there was the potential for creative storytelling choices. "It has to come from the show. 'Buffy' lent itself to a musical because it was so hyperbolically emotional," he said. "But there is an element of absurdity in the Marvel universe that is satirical and bizarre -- the fact that we can tap into that will stop the show from feeling too self-indulgent or dry ... We're not looking for a cool angle -- it's always going to be built from the characters."

As for future plans after writing and directing the "Avengers" sequel, Joss said that he's not married to returning to TV or movies specifically. "The goal is never about the medium -- it's always about the next story," he said. "It's all about the thing I've never done before ... I like not knowing what's next; it's all about making people care about people. I just want to keep telling stories, and if someone pays me, that's also good." 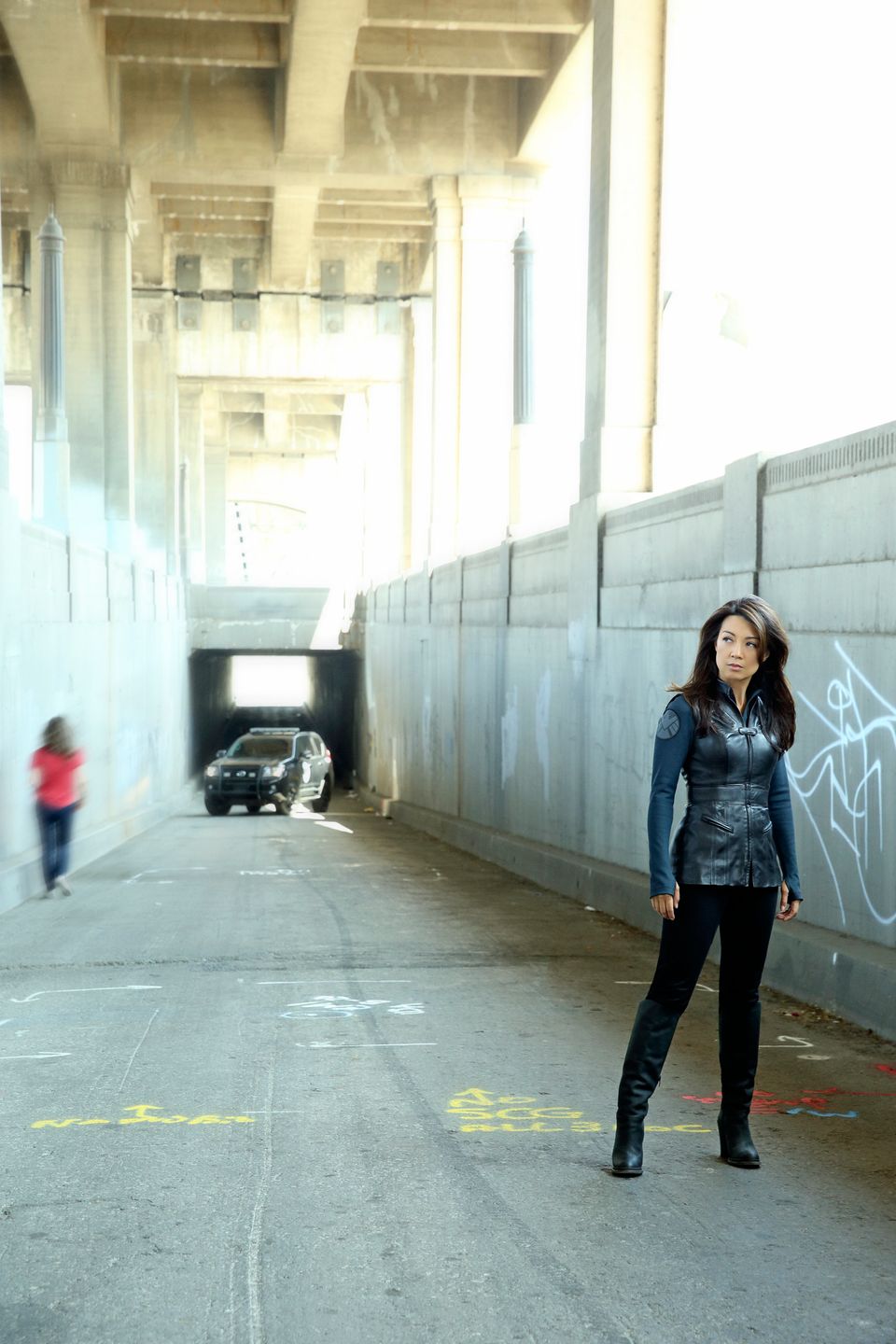