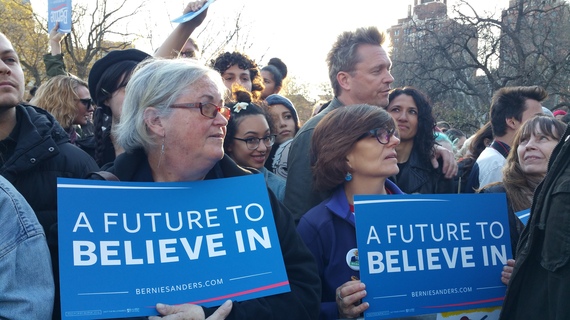 After participating in the Wednesday night love-fest at NYC's Washington Square Park and carefully scanning the audience, it's time to dispel one more MSM-generated myth - that Bernie Sanders attracts primarily the youth and is failing to secure senior citizen voters.

"Balderdash!" - as people my age are reportedly fond of saying.

There are lots of stories that claim this to be true, however. "Bernie Sanders is losing the senior vote" declares CNN Politics. "Why don't older Democrats like Bernie Sanders?" questions Cleveland.com. The Columbus Free Press even offers a primer to the old folk to help them work through the mystification of Bernie's support among the young: "Hey old people! This is why American Youth Feel the Bern."

Shrewdly, the Daily Factoid explains that "Bernie Sanders Has Pulled a Betty White," and declares "He's become one of the rare people who are both unabashedly old and who are seen as cool by Millennials."

So, what is the real story here...at least from the point-of-view of someone six years his senior. (Yes, I would like a younger man as our next president.) What is it that I "get" about Bernie that my contemporaries do not - up to this point? Let me offer three possibilities:

1. We don't understand that our future depends on our youth. Don't think that our grandchildren aren't noticing the squeeze being put on us as we try to stretch our social security checks to cover rising prices, medical and pharma bills and keep a roof over our heads.

They are the ones who will see to it that gram and gramps are treated fairly. It's up to us to see their dreams realized and that they have the financial ability to do this. If they are burdened by school or medical debt, what will be available to care for us?

2. We don't exercise enough. By that, I mean collectively elders do not show up at rallies and marches in large enough numbers. I can guarantee you, painting signs, walking beside the young 'uns and experiencing the frowns of the bystanders and the glares of the police will not only help your constitution (both varieties), but will cause you to rethink how our society treats those who question the status quo.

You do remember questioning the Powers-That-Be, yes?

3. We don't believe anymore. Perhaps we do believe, but in the wrong things. We have a fantasy that we need an authoritarian state, that walls and even the invasion of our privacy will protect us. We are fed this tripe every day. We allow mainstream media to select and spoon feed us news designed to either keep us in fear or in our comfort zone.

Our children and their children...on the other hand...comb Twitter feeds and discussion groups to gain a more visceral awareness of the social and political evils of our time. Thus armed, they are prepared to act.

We seniors have to "turn the dial" and tune in to today's news sites - Twitter, Facebook, blogs, et al - and personally sift through this roof-and-tumble reporting that journalism used to be. You just might be reminded of the beliefs that we have somehow abandoned: that hope will be rewarded, that change is possible and that we are our brother's keeper.

When I found myself involved with and chronicling the Occupy Wall Street movement almost five years ago (Occupy Wall Street: Faces of Zuccotti Park) it didn't take me long to admire the general quick intellect of those involved and their ability to put into action whatever solutions devised, seemingly on the spur of the moment and which came not from top-down authority but from consensus and vote.

I also noticed at that time that there were a lot of people near my age (I was 75 at the time) involved. When it came to arriving at a plan of action, what distinguished us from those younger was the influence we had on those decisions. Our age was of value and our ideas worth hearing out...and even vital.

Perhaps because we take a bit more time to arrive at and share our thoughts, and that they are tempered by hard-earned experience, trial and error, we deserve that respect.

Experience - that world again - tells me that the fashion by which we seniors study issues and then move on those issues might be the key differentiator between us and those who are 30 and under.

Remember! Remember yourselves as you were when you were in your teens, 20's and 30's. Remember what it means to be unafraid of the future. Remember when you felt when you knew you could make a difference. And then remember to vote.

It's back in there, someplace. Vote the youth you have never lost.