Baby Boomers remain the largest generation by volume of any recorded in the history of the United States. Though part of common parlance, the label "baby boom" imposes artificial bookends upon a group of people whose only real commonality is that they were conceived in the years following World War II -- a spike in the birthrate that gives them gravitas, almost tautologically, again thanks to their formidable numbers. They have shaped everything, particularly as they grew up and passed legal voting age, but then they continued by attaining a previously inconceivable purchasing power. And their influence will undoubtedly continue in their wake after the last of them dies out.

Grim as it may be to talk about death, the first baby boomer became eligible for social security on October 15, 2007 (turning 62 on January 1, 2008), and, while a generation widely characterized by ambition and upward mobility is likely to defer retirement, eventually old age will catch up with it. The widespread proliferation of extended care facilities, senior communities, and the younger "active adult" subdivisions is evidence that a sizable portion of the population is demanding a residential typology that scarcely existed 50 years ago, when most people were only expected to live a half dozen years after retirement.

But how do we respond to those who have no desire (or no wherewithal) to leave the places they have called home for most of their adult lives? 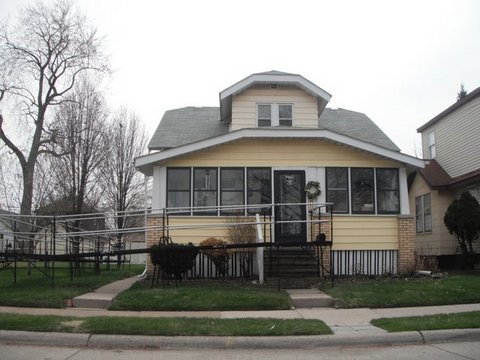 A house like this in the suburb of Lincoln Park may at least shed some light. And, as is often the case, I have no idea the age or family make-up of the folks who call this tidy bungalow home. But the outside evidence suggests they are contending with the forces that father time imposes on our joints. 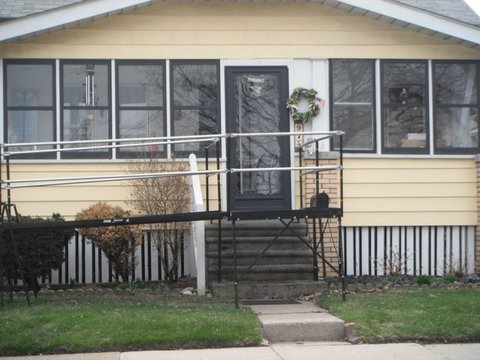 The contraption leading to the front door should make it clear what I'm suggesting: it's a wheelchair ramp. And it's an elaborate one. 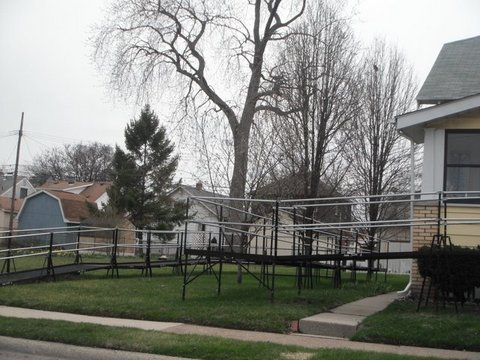 More often than not, they have to be elaborate. Homes dating from this time period rarely accommodated people in wheelchairs, partly due to lack of any organized advocacy on behalf of disabled people and heavily due to lack of demand. Not only were people with access or functional needs less likely to expect navigability or self-sufficiency, the world simply had fewer of them around. Times have changed, and homes with an extensive ramp have grown increasingly common.

Aside from the physicality of the house itself, the space around it could pose a huge challenge. Wheelchairs require a very gentle grade change of 1:12. Otherwise, most users don't have the strength to apply the needed torque to proceed up the slope, or their caretakers may be unable to push. While motorized chairs can mitigate topographical challenges, they are undoubtedly more expensive and prone to malfunctions. Thus, to get the ramp they need, many homeowners must sacrifice a good part of the front yard.

What's interesting about the house in Lincoln Park is that it ostensibly has enough room, even though it rests on what would typically be a small parcel in a relatively dense, walkable pre-war neighborhood. While most of the homes in Lincoln Park claim narrow lots, this homeowner has ample space for a ramp on the one side. 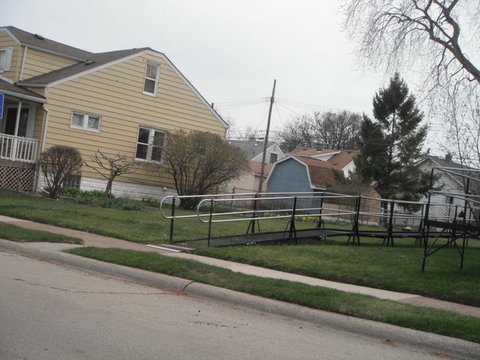 But why would there be such a gap between homes, when the normal configuration for neighborhoods from this time period is much closer-knit, with minimal side yards? 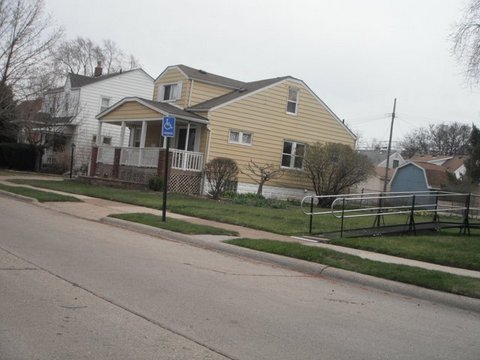 It would appear that this modest little yellow house used to have a neighbor. Just beyond the handicapped parking sign is a curb cut, with a paved strip wide enough for a car. It's hard to imagine any other purpose for that than a driveway that once led to a garage... to a garage that once served a house. The house almost definitely was demolished, and enough of the pavement was removed to clear the ground for fresh turf.

It's unfair to postulate that the owners of the yellow house bought the adjacent property, then demolished it, in part to expand their yard and to provide enough room for the handicapped ramp. That former home could have befallen a million different fates. And the generous side yard addresses what otherwise could have been a great enough engineering challenge to preclude this family's ability to remain in the house.

Sweeping wheelchair ramps in front yards may not jump out to the unattuned eye -- after all, we've seen the proliferation of accessible commercial and public buildings over the two decades since ADA passed -- but it's easy to surmise that their numbers are growing. After all, those baby boomers may soon start facing the mobility impairments that accompany old age, and few houses, both old and new, meet the sundry requirements that allow individuals to age in place. Hinges must allow doors to pivot across a broader space in order to accommodate the gentler turn radii of wheelchairs. Cabinets cannot be placed too high. Knobs on stovetops -- and the burners themselves -- can't be out of reach from a seated position. Toilets need ample room and often bars for leverage to allow ingress and egress. The operability of the most mundane household objects no longer seems so benign.

"Aging in place" may soon become a household term, as this populated generation faces access and functional needs in an array of houses not built to accommodate them. Could this cohort's demand for ramps and big bathrooms reach such an apex that it actually hurts the overall market for conventional housing? Will the younger, less populous, able-bodied generation seek out a glut of homes entering the market? Perhaps the boomers will resort to the tactics on display in these photos.

A colleague cogently observed that we rarely see sweeping ramps to front doors in high-income neighborhoods. They dominate blue-collar areas. Perhaps economics will fuel the aging in place phenomenon, forcing those with fewer resources to upgrade their homes. Meanwhile, homeowners associations in wealthier neighborhoods use deeds to regulate modifications that could vitiate the aesthetics of the community. Covenants force homeowners to find subtler and costlier means of solving mobility problems. Affluent homeowners may also amortize their loans at a slightly earlier point in life, giving them more leverage in selling and moving to an appropriately suited domicile after retirement -- one that better allows them to age in place than the one they enjoyed during their career years. Lastly, affluent adults generally boast superior access to doctors and preventative care specialists, meaning they could be slightly less likely to face mobility impairments caused by common conditions such as stroke, since heart disease or cardiovascular-related ailments routinely affect lower-income people more often and at younger ages.

Regardless of how the baby boomers' silver tsunami shapes future sociological studies, a fixed asset such as real estate will have to adapt to our morphing, creaky bodies. The development world's response to an as-of-yet undetermined demand shift could exert a profound impact on the shape and appearance of residential communities. And we won't always be able to bulldoze the home next door to make way for a new entrance.

A version of this article originally appeared in the author's personal blog, American Dirt. All photos taken by the author.