My mother Lillian Golden is turning 95 this year in March. She is vivacious and vital; has an impeccable memory, is beautiful, gracious and an inspiration to everyone who meets her. An inspiration of what aging gracefully can look like, in a culture that is obsessed with and idolizes youth.

She still lives in her own condo and is an active and integral part of the social scene in her building. She is strong, tenacious and stubborn and has never been in the hospital overnight, other than to have her children. She was well into her thirties when she had my brother Niel and I, which in those days, was considered old.

People are visibly shocked when they hear how old she is, thinking that at the very oldest, maybe she is 75. She has never had any plastic surgery or other work done on any part of her face or body. As far as I know she has never used any products that promise to give her age defying beauty. She is overweight and appears comfortable in her short, stocky frame. It is only in the last year, that some of the physical aches and pains of getting older have surfaced. And, in her predictable way she asks her familiar question, "Why is this happening? I don't understand WHY." Getting older is simply not a good enough reason for her.

Having recently read an article about aging, I told her she might be right. It might have more to do with her decreased physical activity levels and the lack of "shaking her tail feather," than to do with aging. I would have told her to get up and "shake her booty" but she probably would have thought that had something to do with baby's knitted footwear. Different era, different vernacular. It seems aging may not be the only reason that our bodies experience the stiffness or aches and pains that are generally associated with aging. Exercise is vital at all ages.

Her philosophy when it comes to all matters related to health, whether physical or emotional has remained the same. "Talk yourself out of it." Somehow, she has done just that. She is a living example of mind over matter and how a positive attitude is one of the most important contributing factors to how we age. I used to wonder if it was merely fortunate genetics that explained her successful aging, hoping I might be the lucky recipient of those genes. That theory, however, didn't hold up, as she is the middle child of six and has been the only one who has escaped the family history of diabetes, arthritis and various cancers. The one common trait everyone in her family did possess was stubbornness. It kept them all going through the most difficult of times, whether economic or health related.

My mother has never been particularly concerned with what she eats or drinks and has always been overweight; from pictures it appears since her 20's. She says she was never fat, referring to herself as having been "zaftig", a Jewish word meaning "having a well rounded figure or pleasingly plump." None of her lifestyle choices seem to have taken their toll on her well being. She is very young at heart, loves dancing, laughing and generally loves life and is happy. Although not a seeker on a spiritual path by today's standards, she has a strong belief in praying to and thanking God for everything.

She has no worldly accumulations or possessions to speak of, unless you count the massive quantities of toilet paper, paper towels and tissue boxes she stores in her cupboard, because she doesn't want "to run out". A scarcity consciousness that is alive and well in the generation that grew up during the Depression and wartime. She has many drawers and cupboards filled with possible gift items "just in case" she may need one. We often joke that if any of us need an umbrella or wallet, we can count on her to have one ready for us. She laughs and then asks, "what color do you want?"

She will leave my brother Niel, my daughter Lani and I, her only immediate family, nothing of monetary value, but it is the remarkable memories that she has given us that cannot be measured in monetary terms. I know she leaves everyone else who knows her special memories as well. I personally will take rich memories over riches any day.

My mother remains an independent and powerful soul. Although the Queen won't offer congratulations on her achievement of reaching a ripe old age until she turns 100, if I was a betting person, I'd say my mother will be around to collect Queen Elizabeth's good wishes in five years.

As a part of the boomer generation, who have unlimited options and information on how to live healthier and longer lives, I admit that I have become a bit preoccupied with the idea of growing older and losing my youth and beauty. I say that a bit tongue in cheek, because lately everyone I've run into who knew me back then, tells me "You were so beautiful". I was also considered the girl who was "look but don't touch", my shyness being mistaken for the aloof demeanor of an ice Princess. So now, in a culture that honors youthful beauty, I am left wondering, what will we women and men do without our youth and beauty! Aging is about going inward and defining ourselves by things that have less to do with outer beauty and youth, but about experiences lived and wisdom learned. When you look into someone's eyes and you see their soul, the inner beauty always shines through. I believe our soul gets younger as we age. By this measurement, when you look into my mother's stunning blue eyes, you find yourself swimming in the youthful joy of her soul.

"Life is not about waiting for the storms to pass, it's about learning how to dance in the rain." Vivian Greene

When I read this quote, it seemed it must have been written about my mother. She has been a widow since the age of 51, when my father Louis, who was born the same day same year as her, walked up a flight of stairs, had a heart attack and died on the spot. Then, one week to the day, my mother's father also died suddenly. She lost her husband and her father in the span of one week, kept herself together and not only survived, but prevailed. Seemingly unscathed, she moved forward, having to go to work full time for the first time in her life, as my father left nothing but debt, with no insurance policies or money. With no security, no foundation, she entered middle age and somehow thrived, managing to become the sole provider for herself and her children.

Although it is often challenging to look at our parents objectively, I am learning to stand back and see my mother as others see her, a seemingly unstoppable force; the indomitable spirit that she is. She is not famous, rich or successful in the ways society normally measures those things, but she has loved deeply and spreads that love out into the world. The reach of her heart is enormous and she will be remembered for her generosity; the cards and gifts she loves to give for any occasion, but more importantly, for her generosity of spirit. As a tribute to her, I trust I can learn from her, that aging gracefully is an honor we can give to ourselves and my hope is that her life is a glowing example to others of what is really possible. I thank my mother for that gift and hope her life will inspire and encourage the generation who strives to stay forever young, to look at what is most important; to be remembered for loving and being loved. A life well lived. That, to me, is what real beauty is. 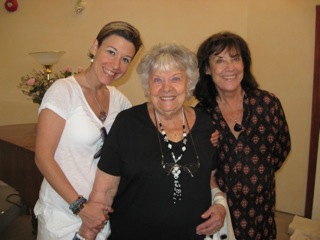