My 78-year-old mother says this to me over the phone last week as if she were scheduling a routine dental exam rather than aligning her yearly planner with that of the Grim Reaper. Although not terminally ill, my mother has taken a swift decline in the last couple of years. In a bad genetic crapshoot, osteoarthritis has racked her spine confining her to a wheel chair and retinitis pigmentosa, a degenerative eye-disease, has taken the majority of her sight. My stepfather, 75, has fared much better health-wise, but the afflictions limit them both. And her recent diagnosis of Parkinson's and early dementia now threaten the simple pleasures like holding a cup of coffee or delivering perfectly-timed one liners. But for now, with her wits still very much about her, she remains good-humored if not practical about her lot.

Even as an adult, nothing is possibly more unsettling as watching your parents advance into old age. Especially if they still play a strong parental role. I have seen other mothers and fathers willingly hand over the reins to their adult children -- Christmases migrate to other homes, lavish gifts or financial help are accepted from child to parent without protest. My mother and stepfather have no interest in such delegations. At 40, I am the youngest of a blended family of six. We've all managed to become professional, responsible individuals, but still, our parents remain hesitant, limiting our familial contributions to the occasional holiday pie or Mexican cheese dip. In the past, when I suggest things like hosting a family gathering or offer them financial tips, they look at me the same way they look their precious Min Pin "Baby" when she dons a holiday sweater. Then one of them offers to make me a snack, and I surrender.

They despise receiving gifts from their children. Last Father's Day, I decided I would hire a landscaping company to take over my stepfather's lawn maintenance. Despite doctor's orders, he was regularly mowing his own large yard, as well as fetching the occasional branch off the roof. I called a local landscaping company and tried to explain the situation. Over the phone, the unfolding of the operation sounded like the lawn care equivalent of Zero Dark Thirty:

"You are to arrive at 7 a.m. You are to park down the street. When he realizes someone is mowing his lawn, he's going to come out and try and stop you. No matter what he does, just keep mowing."

(Silence on the other end of the line.)

"Lady, is he going to try and shoot us?"

My mother is no better. Bring her some of her favorite bread from a bakery here in Austin, and she'll stuff your pants with enough dollar bills to send Magic Mike to technical school. Try and beg off her advances, and you're likely to find your suitcase lined with twenties, as if you were a baked goods drug mule.

So to watch my parents give in to the forces of failing health has been angst ridden to say the least. A friend once described the death of his father as having part of the roof blown off from over his head. He said it was then he realized his job was to become part of that roof. For me, the undeniable decline is like seeing the storm clouds gather on the horizon with no means to prepare. And regarding the parental patchwork, I am, at best, an ill-fitting tarp. 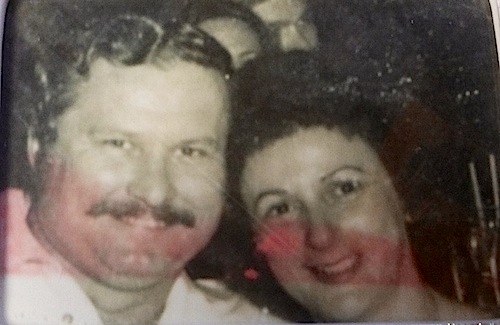 For my mother's part, she has decided to dance among the incoming showers. When testing her mental status, her home health care aid asked, "Can you tell me your middle name?"

"It's Shirley," she replied, adding flatly, "And now I will have to kill you."

Facing the inevitable, as adult children, we often mourn the loss of these witnesses to our entire lives, the people who can recall us back when. But nearing the end, perhaps it's the child's job to return the favor. And when form may limit function, to let them know they are still needed in ways that transcend the physical and should not be prematurely discounted, dismissed or replaced. My mother shared that the greatest cruelty of age is you only change on the outside. "I look in the mirror sometimes, and I think, Who is that old woman? Inside, I still feel 30."

This in mind, perhaps the one gift I can give my parents without meeting resistance is to bear witness to a gentler era. To say, I knew them when, too. Before the wheelchairs, medications and constant assist. Back when disco was king, and they built their own home and business from the ground up together. Back when they danced in the living room to Zydeco music and to the groans of their embarrassed brood. Back to the times when they snuck into Chuck Berry's dressing room for an autograph and tandem bungee jumped to celebrate their anniversary. And back when they cruised in their first Cadillac, powder blue and stretching on forever, like the sky and road ahead of them.

And with the focus now shifted, I can let them know that 80 is not enough. Nor 90.

Author, 'The Unexpected When You're Expecting'