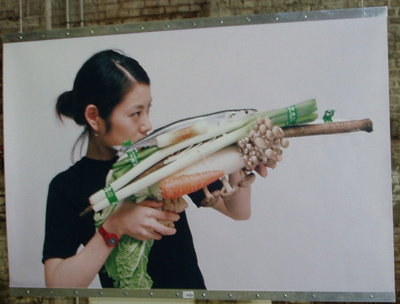 You're probably busy worrying about things like insolvency and unemployment, and rightly so; our banks are taking on water faster than we can bail them out, while the job market--and our waterways--are evaporating as quickly as that pool of color-coded conservatives the GOP's called up to counter the Obama juggernaut.

Steele, Jindal, Keyes? Please. The Republicans ought to be waving a white flag, but they just can't let go of the confederate flag. Witness the witless mayor of Los Alamitos, Dean Grose, who circulated an e-mail depicting a watermelon patch on the White House lawn with the caption "No Easter egg hunt this year."

Grose, who claimed that he "wasn't aware of the racial stereotype that blacks like watermelon," finds himself obliged to resign and "has sought assistance from Orange County Human Relations Commission to acquire greater sensitivity." With all due respect, that sounds about as effective as a charm school run by Christopher Hitchens.

If only Grose were a bit savvier, he could have claimed that he was simply endorsing the White House Victory Garden concept that Alice Waters & Co. have been famously promoting. I'm sure the Eat The View campaign would gladly welcome some bi-partisan support.

Quite frankly, though, conservatives don't seem all that psyched about fresh fruits and vegetables. See, fruits and vegetables may be high in vitamin K, but they're low on K street lobbyists. Fresh produce is, alas, a mere "specialty crop", not a deep-pocketed special interest group worthy of generous subsidies.

This explains why commodity crops form the cornerstone of our National School Lunch Program rather than the fresh fruits and vegetables the USDA is launching yet another campaign to promote. So we're feeding our kids a steady diet of "high-fat, low-grade meats and cheeses and processed foods like chicken nuggets and pizza," as a recent New York Times op-ed from Alice Waters and Civil Eat's Katrina Heron lamented.

Waters and Heron point out that this is a "poor investment," and float the radical notion that perhaps the lunch program could try nourishing our kids with freshly prepared, wholesome, unprocessed foods instead of the heat 'n' serve commodity crop crap it currently dumps on our little dumplings.

Our famously dysfunctional health care system's already groaning under the weight of a whole range of diet-induced diseases; who's going to pick up the tab for all that incipient diabetes and hypertension and heart disease?

Maybe Big Food could chip in--after all, PepsiCo agreed to help offset the cost of "Mountain Dew Mouth," an epidemic of dental disease in Appalachia caused by the practice of giving toddlers soda in their sippy cups. Couldn't we have similar initiatives to tackle "Whopper Waist"? What about Dunkin' Diabetes?

Of course, we could also just try making healthy food more accessible and affordable. But that would upset the anti-apple cart, and yes, there is one. Consider the following letter to the Editor that the Times published in response to the Waters/Heron op-ed:

Alice Waters and Katrina Heron's suggestions for improvements in the National School Lunch Program include a healthy helping of wishful thinking and inconsistency.

For one thing, food safety, environmental preservation and energy conservation are not promoted by "foods that are produced without pesticides or chemical fertilizers." Such foods are expensive and inefficient, because they use more land and water than if modern techniques were employed.

Moreover, Ms. Waters is a longtime opponent of the use of the most precise and predictable genetic techniques to improve crop varieties, a view that is diametrically at odds with the writers' desire for the federal government "to back environmentally sound farming practices."

Finally, "food safety" would likely become a far greater problem if thousands of schools were to begin to "cook food from scratch": the vast majority of food poisonings result from the improper handling of food -- in particular, from inadequately cooking chicken or permitting the juices from raw poultry to contaminate other foods.

The writer, a medical doctor, is a fellow at the Hoover Institution and a former Food and Drug Administration official.

Welcome to another steaming poo-poo platter of Agribriz propaganda served up by a biostitute whose foundation is fossil-fueled by Archer Daniels Midland, Exxon, Ford, GM, Chrysler, and Titanic financial titans like J.P. Morgan and Merrill Lynch.

Miller once wrote an op-ed for the Times in which he argued that rBST, Monsanto's bovine growth hormone, was a boon to the environment because it enabled dairy farmers to squeeze more milk out of fewer cows, thereby reducing their carbon footprint. Consumers, he claimed, were happy to buy milk from cows injected with this "safe and useful product...in spite of efforts by biotechnology opponents to bamboozle milk processors and retailers into believing that consumers don't want it."

Opposition to rBST, he warned, could send the cost of milk soaring to $5 a gallon.

In fact, widespread consumer rejection of rBST compelled Monsanto to sell it off to another company, while the price of milk has fallen so low that dairy farmers are being forced to slaughter their cows because they can no longer afford to feed them.

Organic farming may well be more labor intensive, but it's simply preposterous to claim that it's more resource intensive or environmentally damaging than industrial agriculture. In fact, recent studies have shown that organic farming is far kinder to the environment, and offers the best hope for feeding the world.

Miller goes on to attack Waters for her opposition to the "most precise and predictable genetic techniques to improve crop varieties," by which he presumably means genetically modified crops. He states that such a position is "diametrically at odds" with her plea to the USDA to make "good on its fledgling commitment to back environmentally sound farming practices." This up-is-down, black-is-white, topsy turvy spin ranks right up there with Monsanto's latest ad campaign that claims they're all about sustainable agriculture. Yes, and Rush Limbaugh wants to do away with partisan rancor. Whatever.

Miller then goes and gets his genetically modified cotton knickers in a twist over Waters' and Heron's suggestion that school lunches would ideally be cooked from scratch. According to Miller, this is an open invitation to an epidemic of food poisoning, the "vast majority" of which results "from improper food handling."

Nevermind that all the recent salmonella and E. coli outbreaks have been linked to industrial agriculture. Specifically, factory farm feces. You see, the bacteria that brought us the tainted spinach, tomato, and peanut recalls are "intestinal bacteria," as Neal Barnard, president of the Physicians Committee for Responsible Medicine, recently noted in Agweek. "But spinach has no intestine. Neither do tomatoes. And neither do peanuts."

After reading Miller's galling Orwellian garbage, I purged my palate of the Agribiz aftertaste with Tom Philpott's excellent, nuanced take on our school lunch program over at Grist. Philpott cites several critics who claim that the kind of overhaul of the school lunch program that Waters and Heron propose may not be doable--or even desirable. He explains precisely why it is both, and concludes that, yes, oui can:

Finally, the French pay up for school lunches -- $8 a pop, last I checked -- and their economy is certainly doing no worse than ours; and their health metrics are better. In Paris, they've got chefs cooking at daycare centers!

Of course, this is precisely the kind of thing that has rabid Republicans foaming at the mouth. As Mitt Romney told a conference of conservatives on Friday:

Advertisement
"I'm afraid I know where the liberal Democrats want to take us...As they try to pull us in the direction of government-dominated Europe, we're going to have to fight as never before to make sure that America stays America."

Fresh healthy food in our schools? Eee-www. That is, like, so EU. This is America, dammit. We don't do healthy.