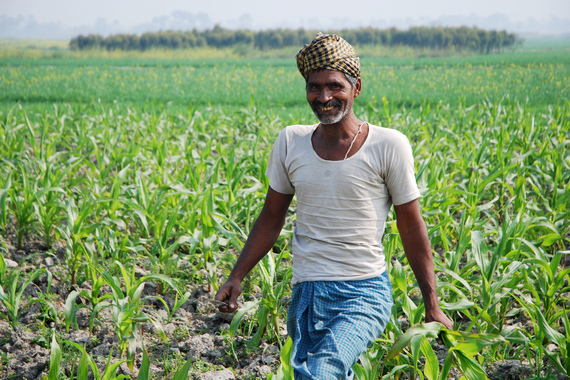 Earlier this year, Rajesh Birsingh, a farmer from Maharashtra, India, watched helplessly as his wheat crop was destroyed in an unexpected downpour. He lost 40 percent of his harvest. He was in debt. He and his family were hungry.

The new Sustainable Development Goals (SDGs) have been designed to help vulnerable people like Rajesh. But they are already under fire before they have even been ratified. Criticized for being "sprawling" and "vague"; the overwhelming concern is that the SDGs try to be all things to all people, and will thus end up being nothing to no one. Can 169 targets to measure the success of 17 goals really be put into action?

They can, if you choose your battles.

The SDGs are complex because the challenges facing our planet (feeding 9.6 billion people from shrinking resources in a climate-extreme world for a start) are equally complicated. Success will hinge on identifying interventions that tackle more than one SDG at a time.

Take the three critical issues of poverty (SDG 1), hunger (SDG 2) and climate change (SDG 13), a triple threat to people like Rajesh. They are mentioned 28, 6 and 18 times in the SDG outcome text respectively. These three threats are inextricably linked, and can be killed with one stone: agricultural development.

If Rajesh had access to insurance, that would be paid out when pre-defined weather events occur, he would be protected from the poverty and hunger that a failed harvest can bring, and could more securely invest in better seeds, tools and practices that in turn could shield him from further climate shocks. At the CGIAR Program for Climate Change, Agriculture and Food Security (CCAFS) we are working with the Indian government and the Agriculture Insurance Company of India to develop better insurance systems. Millions of farmers are already seeing the benefits from insurance but only 20 per cent of farmers in India use crop insurance - imagine what a dent in the Sustainable Development Goals we could make if that number tripled and if insurance products could reach a diversity of farmers, including those from poorer households and women.

When rural farmers are helped to succeed, it is not only hunger and poverty we see reduced. Farmers' families are healthier, and become more productive, driving economic growth. Jobs are created, infrastructure improves, and whole communities become more resilient to a changing climate. Every single one of these benefits is within the remit of the Sustainable Development Goals - and we can hit them all with investment in sustainable, climate-smart agriculture.

It's not just Indian farmers facing food insecurity. Food prices are at a six-year low; which is good news for poor consumers, but spells trouble for poor food producers (of which there are half a billion globally, many of whom live in the poorest regions in the world). Cities are bursting at the seams while rural areas languish. Growing urban populations and the burgeoning middle classes in developing regions are demanding more varied foods, and lots of them.

Climate change threatens our ability to feed these extra mouths, and farming remains both a major culprit (it emits around a third of the world's greenhouse gases) and a victim of this problem.

This is the snapshot of the world in 2015 that the SDGs aim to transform. Only the agricultural sector has the answer to solving all three issues of poverty, hunger and climate change at once: and it is ripe for revolution.

Innovation also features in the SDG outcome text an impressive 19 times. Innovations - like better crop insurance - are going to be key. We know that new technologies can increase crop yields, reduce pressure on the environment and, if appropriately targeted, decrease social and gender inequality . But these innovations require investment. Is it there?

In 2014, $2.36 billion in venture money was invested in "agtech" - agricultural technologies - that's more than the amount invested in financial technology in the same year. It is clear the agtech sector is heating up. There is an unprecedented opportunity here for those bold enough to take it. The United Nations climate change talks in Paris this December present the chance for donors and governments to make money available for projects that will help farmers like Rajesh.

Money alone won't cut it. Our research shows that strong political support to make products like crop insurance viable is also necessary, as well farmers' involvement in the innovation process. Solutions shouldn't be handed down from above; to ensure new technologies work, they have to meet the immediate needs of those using them. In the research efforts of the International Water Management Institute (IWMI) on flood insurance in India, farmers, civil society organisations and government agencies are partners in the research from day one. We do need new approaches to research that embrace the key stakeholders.

Equipping a generation of farmers to prosper is the smartest action we can take for a sustainable future. Investments in agriculture are cost effective, and can tackle several SDGs in one stroke.