Excerpts from an interview with Miguel Ramirez, National Coordinator of the Organic Agriculture Movement of El Salvador 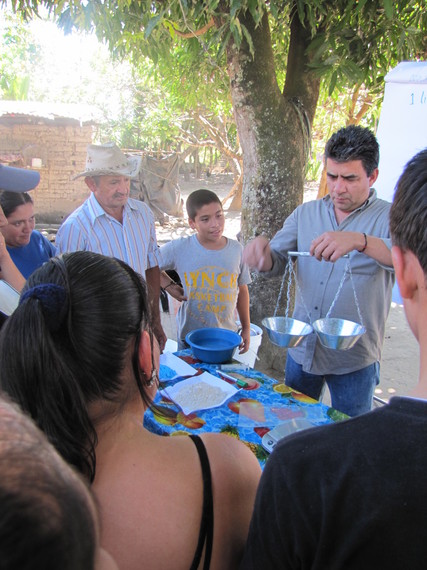 We in the Organic Agriculture Movement see the soil as Mother Earth, a living organism, which gives birth to all kinds of life. Mother Earth is agonizing, and needs to be rescued. Even a new small plot of land under organic management is part of the effort to revive her.

Our territory is made up of just 20,000 square kilometers, with 70 percent of the territory dedicated to agriculture. The challenge is to keep winning over new farmer families that will re-convert to organic farming and liberate the land.

For 60 years, Salvadoran peasants have been marginalized and impoverished by the agro-industrial model [chemically dependent, large-scale, corporate-controlled agribusiness], which is based on resource and human exploitation. Today, peasants in El Salvador, as throughout Latin America, are living in a system of semi-slavery and are subjected to expensive and toxic technology that doesn't belong to them.

People are facing some very serious health problems. Prolonged exposure to pesticides and other toxins in our food is causing low renal function, cancer, and diabetes.

Another problem we face as a result of this system of production is the extreme degradation of our natural resources. El Salvador has the most soil degradation in all of Central America. Eighty percent of our land is degraded and 99 percent of our rivers are contaminated.

According to some geneticists, biologists and anthropologists, Central America was one of the first places that started practicing agriculture, in about 7,000 BC. The Mayan civilization was one of the pioneers of agriculture. We have incredible historical wealth regarding their practices in El Salvador, which need to be rescued. One is the Mayan system of production known as the milpa [small bio-organic gardens involving crop rotation and family control]. For thousands of years, the milpa guaranteed food sovereignty and healthy foods for civilization.

This model was disrupted by several historical events. The Spanish invasion 500 years ago destroyed the entire Mayan tradition and production model based on food sovereignty. Local communities were forced to stop producing their own food and to start producing food that was of interest to the Spanish colony.

The next significant influence was the Green Revolution in the 1960s. Then, after World War Two ended, military machinery for chemical weapons was transformed and utilized for agricultural production. All of Latin America, including El Salvador, fell victim to the imposition of this technological model.

El Salvador has a tragic, repressive history, including the war waged against our 12-year revolution. The war ended in January, 1992 after the peace accord was signed, which helped create conditions that made it possible to start organizing, educating and working towards agro-ecology and organic agriculture. Initially, the movement wasn't very successful, but about 10 years ago we started working again, and the movement for organic agriculture began growing.

Our main strategy over the past six years has been raising awareness. Unfortunately, poor peasants defend pesticides, which is the only technical package they know. Agrotoxic industrial agriculture is like a drug. Once one falls into the vice, it's hard to get out. We work to help the farmers understand that they must stop being the object of consumption in this system. They have to reclaim the values and rescue ancestral knowledge, which is a primary pillar of the movement.

We believe that, with education, awareness-raising, and community organizing among Salvadoran peasants, it's possible to reverse our [agricultural] history. We believe that change will only be possible if it comes from the ground up, from a campesino population that is conscious and organized.

The consumer sector in El Salvador is also very misinformed. They don't know the peasants' reality and they know even less about the importance of reclaiming healthy consumption. We are working to bring about a direct relationship between producer and consumer, so consumers can understand and value peasants' work, what it takes to deliver foods to each Salvadoran's table.

We believe that in order to guarantee food sovereignty, we must have organic agriculture, offering healthy food for all. Therefore, we don't believe in overpriced organic products. That's an elitist practice and it's a contradiction to our work. The Organic Agriculture Movement is working to change that, because we believe the entire community can and must eat healthily.

When the left-wing government took power in El Salvador [in 2009], our hopes soared. Before the elections, we began working with the left political party on a plan for developing the agricultural sector, which would include the strategy for organic farming. This has already become a focus in the administration's five-year plan. We aren't completely satisfied with the response so far, but we truly hope that the plan will materialize into concrete actions.

In July of 2014, we submitted a proposal to the Ministry of Agriculture for the development of organic farming, with 13 strategy proposals. The Minister acknowledges that organic farming is a threat to strong financial interests. The agrochemical transnationals are like monsters, capable of putting into place and removing governments in Latin America. [See, for example, this article.]

Monsanto and other companies, such as Bayer, Dow, DuPont and Singleton, have multi-million dollar deals in El Salvador and all Latin American countries. The previous government bought all of their fertilizer and seeds from Monsanto to give to producers in the form of agricultural packages. The relationship between these companies and the government has been breaking down with this administration, and we hope that the rupture will grow even larger.

Some research bodies in the government still don't know about alternative or organic farming, because academia has been taken over by companies like Monsanto. Part of our struggle has also been to have the National University's Agricultural Engineering Faculty reinvent itself, because that's where our main detractors are. The faculty, wittingly and unwittingly, defends agrotoxic agriculture, and they continue to educate professionals who follow that line.

I'm happy to say that in January 2015, we held a training workshop for the National University's Agricultural Sciences Faculty and academic staff with the objective of starting to transform the curriculum. We have introduced agronomy professors at the national university to the theories of organic agriculture, and have been taking them on field visits to help convince them. Many of them are seeing the benefits and are including agroecology in their curriculum.

This is our struggle. There are still many challenges ahead. But we're making progress in this titanic but beautiful struggle, to reclaim the lives of all Salvadorans.

For more information and to support the Organic Agriculture Movement of El Salvador, contact Ecoviva.

With thanks to Flavia Moreno for translation, Natalie Miller for help in editing, and Karolo Aparicio and Nathan Weller for making our interview possible.

Copyleft Other Worlds. You may reprint this article in whole or in part.  Please credit any text or original research you use to Other Worlds.