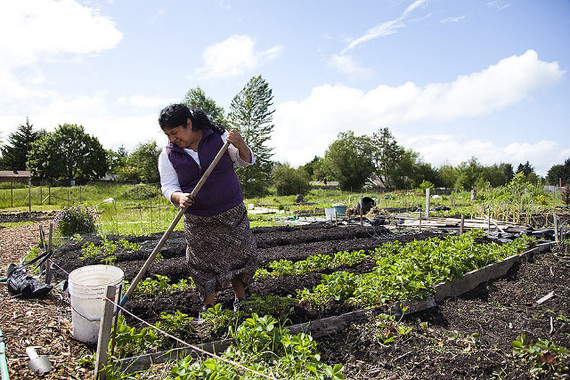 Since the days of Secretary Earl Butz in the Nixon Administration who advised farmers to "get big or get out", agriculture in the United States has been dominated by large corporations setting the stage for an agricultural sector focused on big profits instead of local farmers, local economies and local resources. The industrial food system model of farming has spread all over the world and is often promoted by corporate agriculture as the only way to feed the planet.

There are 500 million rural and urban families around the world whose lives tell us a different story and offer a better solution. These small farmers are feeding 2 billion people, in addition to themselves, and growing 80 percent of the food in Asia and sub-Saharan Africa. There is also a growing movement all over the world for small-scale urban agriculture which accounts for an ever growing percent of the world's food supply.

Each year, industrial agriculture gobbles up more and more land in every part of the globe in what are called land grabs, creates almost half of the world's greenhouse gases, depletes and pollutes water resources and the land and promotes the latest pesticides, herbicides, fertilizers and genetically modified crops. It has the support of our government, major foundations and giant food and agriculture corporations. In many countries, including the U.S., most of the industrial agriculture operations do not even grow food but rather crops to feed animals or machines. These latest techno fixes for farming are pitched to farmers as labor saving, money making solutions for more abundant crops and a better life. More often than not what they deliver instead are financially ruinous expenses, health risks to the farmer and family from the chemicals, damage to the land, loss of their native seeds and unhealthy food. Millions of farmers have fallen into this financial death trap and eventually lose their land. In India, 200,000 farmers have lost their lives as financial ruin pushed them into suicide and their families into the depths of poverty and hunger.

The continuous expansion of industrial farming is resulting in more people going hungry. The increasing costs of production - as few companies rack up the larger margins of profit - are pushing farmers out of business and depleting their access to resources like land, water and seeds. Currently 70% of the hungry worldwide are rural families and fishermen, many who were pushed out of their land and oceans and rivers.

Instead of the old mentality of "getting bigger", there is another way and it is working for millions more farmers every year. It is called agroecology and it combines the best of the new agricultural science with traditional farming methods. It is not just an agricultural method but a way of life that respects the people, land, the water and the farm communities. It depends on community, people helping each other. It has proven to be successful all over the world and is being promoted by numerous organizations of farmers, especially the international organization La Via Campesina. With very little resources these farmers are doing what industrial farming can never do, not only grow more food in the long run but improve the land, water and air and respect the local people and their communities.