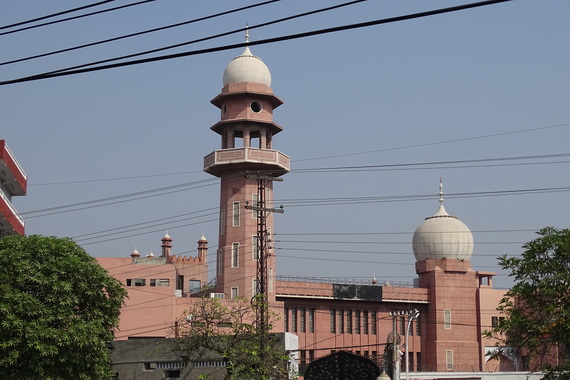 I took this picture last month in Lahore, Pakistan. I knew of this place, I knew what happened there on May 28, 2010. But actually standing before it and seeing the undeniable reality of it sucked the life out of me for a few seconds. This is a place of worship; five times a day people come here to perform Salaat- the Muslim prayer- behind an Imam. Just like any mosque in Pakistan. But this place is not called a mosque. It goes by the name of "Darul Zikr" which means "The abode of the remembrance of God".

Bear with me, I will return to Darul Zikr.

Pakistan, 1953: Ahmadis are a salient facet of Pakistani society. They have the highest literacy rate of any community, are prominent in the civil service and excel as teachers, scientists and Military Officers. The Foreign Minister of Pakistan is Sir Zafarullah Khan, an Ahmadi who drafted the Pakistan resolution-the famous 1940 declaration by the All India Muslim League calling for the creation of a Muslim State.

Not all, however, are pleased with the accomplishments of the Ahmadiyya.

The Mullah strokes his beard thoughtfully.

The Mullah writes a book, sort of a Pakistani "Mein Kampf". The Ahmadis are a problem; they are perverting the faith and are more loyal to the British than to non-Ahmadi Muslims. They consider all non-Ahmadi Muslims heretics. They have social and political ambitions that will do no less than destroy the practice of true Islam in Pakistan. The only solution to all this is excommunicating them from Islam.

The Mullah gathers a cabal of demagogues who demand the Government declare Ahmadis non-Muslims and remove all Ahmadis including Sir Zafarullah Khan from important government posts. The Government refuses and the Mullah tells his followers to take to the streets. Hundreds of Ahmadis are killed and shops, houses and places of worship burnt to the ground. The Mullah is arrested and sentenced to death. Two months later this is changed to a life-sentence. Two years later the Mullah is pardoned-despite his never requesting a pardon or accepting any wrongdoing. His adoring followers see this is a vindication and his popularity grows like never before.

The Mullah bides his time.

Pakistan, 1974: On the pretext of an attack on members of the Mullah's political party in Rabwah (the headquarters of the Ahmadis) the Mullah launches street protests again. The demand remains the same-declare Ahmadis non-Muslims. The Government offers little resistance and the houses of Parliament pass the bill that makes the Second Amendment part of the constitution of Pakistan. The Mullah has triumphed, Ahmadis have been declared non-Muslims.

Pakistan 1979: A huge crowd gathers for the Mullah's funeral in Lahore. He is remembered as a true soldier of the faith and the ultimate authority on Jihad. A nation weeps.

But neither Mullahs nor the state is done with Ahmadis yet.

Pakistan 1984: General Zia-ul-Haq promulgates Legal Ordinance 20. No longer can Ahmadis even refer to themselves as Muslims. They cannot say Muslim greetings, cannot cite the Quran or Ahadith and their places of worship will no longer be known as Mosques. The ex-communication is complete.

Pakistan 2010: Two Ahmadi places of worship are attacked. Ninety-four people are killed and a hundred and twenty injured. The Pakistani Taliban claim responsibility. One of these places is Darul Zikr.

So we return to Darul Zikr. 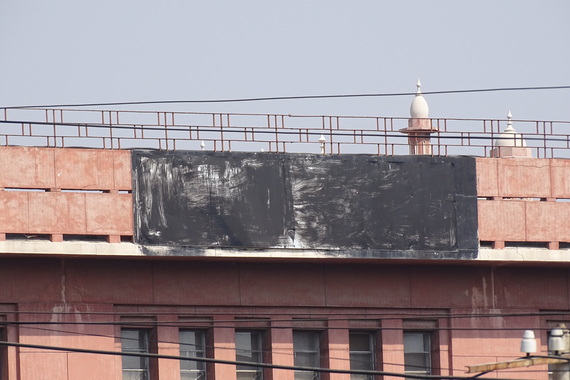 Pakistan 2012: Two years after it was attacked and its occupants butchered the administration of Darul Zikr was ordered by a judge to remove the "Kalma"-the bearing of witness that there is one God and Mohammad is the Prophet of God upon reciting which one becomes a Muslim-from the front of the building. Here are seen the ugly strokes of black hiding the Kalma written on Darul Zikr.

As if black paint could hide the faith of the Ahmadiyya from the light of God's sun.

Here is the world of intolerance in a grain of sand. Not even cold-blooded mass murder can suffice for those who seek to affirm their faith by denying it to others. It is time to put an end to this callous persecution that finds no justification in the Koran or in the example of Prophet Mohammad.

The monopoly of the Mullah must end and our great faith must belong to all who profess it. The Holy Quran says in Surah Ahzab:

Those who have been driven from their homes unjustly only because they said: Our Lord is Allah - For had it not been for Allah's repelling some men by means of others, cloisters and churches and oratories and mosques, wherein the name of Allah is oft mentioned, would assuredly have been pulled down. (22:40)

Let us all strive to become the means by which Allah repels those who would tear down the houses of God in His name.

The Pakistani state can lay no rightful claim to tolerance or justice till the right of Ahmadiyyas to identify as Muslims is unconditionally accepted.