Ahmed Mohamed, 14, was a student at MacArthur High School in Irving, Texas, when he was arrested last week after his teacher suspected that his homemade clock was really a bomb. His Uncle Moussa Al Hassan does not blame the teacher. "The ordinary American citizen lives in a state of fear of Arabs because of the American media's portrayal of him as an extremist terrorist," Moussa told HuffPost Arabi.

Ahmed never thought his name would cause so much controversy. The clock, which he invented, and built in 20 minutes using basic materials, led to his arrest by Texas police. Ahmed couldn't go to school for three days, and the incident has sparked widespread anger that he was unfairly treated.

Ahmed's arrest is loosely reminiscent of a similar experience his grandfather had, also at the age of 14, in the family's Sudanese village of Shatoy.

"My father was passionate about science," Moussa recalled. "Aware that the schools affiliated with the British occupation were the best, he ran away to study in the city of Omdurman, even though his father strongly opposed those schools."

But after he had walked six miles by foot, "one of the local residents caught him, held him for several hours, and sent him back to his family," Moussa said. "He returned to the Khalawie schools, which the Sudanese prefer to the British schools."

Ahmed belongs to a prominent Sudanese family. "The whole family has been keen on pursuing education, starting with the grandfather, who struggled to put his children through schools and universities in Sudan," Moussa said. "He became a role model for all of us, and we have passed that on to our children."

Ahmed's grandfather passed away in 2008, at the age of 80. He was the reason his 18 children embraced Sufism. Ahmed's father, Mohamed Al Hassan, directs the Islamic Sufi Center in Texas, which was established in the early 1990s and is frequented today by a mix of Arabs and Americans. 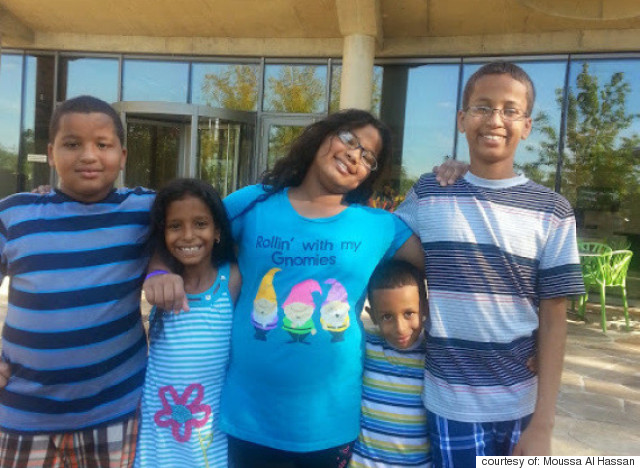 Ahmed Mohamed and his siblings.

Mohamed migrated to the United States from Sudan in the 1980s. Ahmed's eloquence -- which became clear to the world at the press conference he gave outside his house following his arrest -- resembles his father’s, who belongs to the Sudanese National Reform Party. He ran against current President Omar al-Bashir in Sudan's 2010 election, as well as earlier this year.

"It was a miserable election," Ahmed's uncle said. "Bashir's regime won’t allow anyone else to win."

But Ahmed’s father will not be discouraged from running for president in the upcoming elections, which will take place in 2020. "My brother is strong-willed, and he is confident that he has something to offer to his country," Moussa said. “He doesn’t know fear, threatening discourse won’t keep him from achieving what he wants." 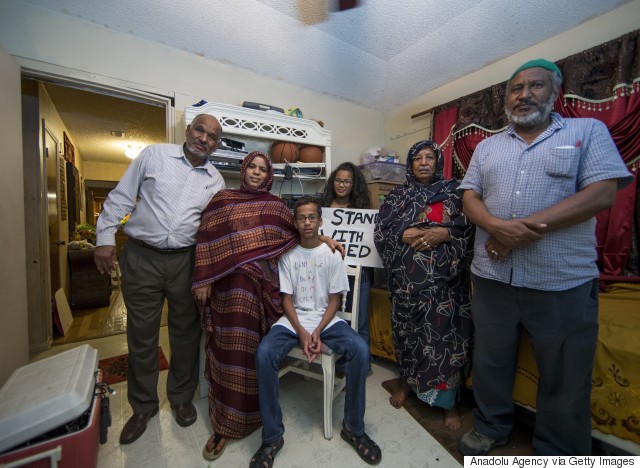 Ahmed Mohamed with his family members at his house in Irving, Texas.

Mohamed Al Hassan’s first stop in the U.S. was New York City, where he lived between 1986 and 1990. “Mohamed and his younger brother Ezz El Din struggled to try to set up some sort of business there. On holidays, they would sell sandwiches on the street, in an effort to generate income to help get them through that rough period," Moussa said.

Frustrated, Mohamed booked a flight back to Sudan, packed his bags, and went to the airport. But he changed his mind at the last minute. Anxious about the harsh conditions back home, he decided to stay in the U.S., and head south to Texas.

In Texas, Mohamed got a job as a taxi driver, before selling mobile devices and electronics, Moussa said. He married an American woman, and later married his current wife, Mona Ahmed Al Hajj, who is Sudanese.

To date, Mohamed has set up a number of car rental companies in Texas with his brothers. He has also set up a few companies in Sudan, since 1998, in the fields of tourism, travel and solar energy.

"Mohamed is a role model to all of us," Moussa said. "I’m proud of him and of his unique son Ahmed."

This post first appeared on HuffPost Arabi and has been translated into English. It has been edited and condensed for clarity.