Young Ahmed Mohammed's recent arrest over a handmade clock launched YR alum Shaffy Moeel back in time to memories of her own public school education and left her wondering, if she had been treated as Ahmed was, who would she be now? 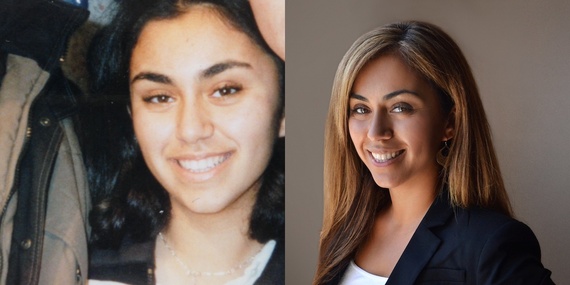 In 7th grade, Lindy and I partnered up in French class for our final project -- to make a map of France. I've always been fond of maps. Our family had a giant map of the world hanging above the dining table in the first house we lived in after arriving in the Bay Area (incidentally, Metallica had just moved out when we moved in, but that's another story). Our map over the dining table said "Relief Like Map of The World." I only knew one definition of relief at the time and thought it strange but appropriate that a map of the world would be reassuring to others as well.

Anyway, Lindy and I were excited about our project. We were glad we were not assigned to some stupid project like creating a French cookbook or learning some French song. A map! Like pioneers we set out on our project. Wouldn't it be cool, we brainstormed, if we made this map 3D? Heck yes, it wouldn't just be cool it would be totally AWESOME! So we wrote up a shopping list for my mom and her dad and got to it. We made mountains out of clay and paper mâché, we made rivers out of blue tissue paper and forests out of green felt. We mounted it on hard cardboard and handled it like some holy grail on our way to Adams Middle School. "Voila!" We presented it to our Madam. She loved it and fawned over it and made us feel like Michelangos. Lindy and I were over la lune. Encouraged by our teacher's exuberance, our classmates high-fived us and praised our creativity.

I never paid much attention to the kids who asked me about my "uncle" Saddam Hussein or who told me to ride on my camel back home. These kids, it seemed to me, tried to make just about everyone feel terrible, equally. Like if you were the one boy in the entire class who didn't have a 49er or Raiders starter jacket. Or like if you did but yours had a stain from your lunchtime bean and cheese burrito. Or if you had acne, or no boobs, or you wore the same jacket two days in a row or any number of tiny torments. My general strategy was to avoid the idiots but in the context of middle school bullying, their racists taunts seemed customized for me in the way an acne comment might have been customized for someone else. I never took it too seriously. Plus, in my young mind, I wasn't even Iraqi so who was the real dummy.

But if it had been the teacher suspicious of my belongingness, mocking me in any small way, I would have shrunk. I would have tried to be as invisible as possible. I got very lucky in my California public school education. I was guided lightly and encouragingly by people who were good teachers and sometimes great human beings. My teachers never even came down on me hard when I was being a total idiot. Once, when i was running for 7th grade class president, I thought the slogan, "You'll appeal if you vote for Shaffy Moeel" was a good idea. I think I was thinking that the word "appeal" had something to do with "pleasing," I DONT KNOW I WAS JUST A KID SHEESH. My English teacher Mr. Brown pulled me aside and gently told me he'd seen my campaign posters and maybe my slogan didn't make sense? Maybe because I was encouraging people to change their minds after voting for me? Something like impeaching my presidency? He offered various other slogans, complete with rhyme and meter, even a limerick he'd taken the time to put together. What?! NO, Mr. Brown, I think YOU'RE the one that's confused, and I skipped out of there with a "God, grownups are so DUMB" sigh, happily pinning up my appeal Moeel posters. I won, by the way. Like I said, PUBLIC SCHOOL.

So last night when I read about Ahmed Mohammed and his genius little clock my heart burst into a million little tick tocky pieces. I hope we can all unlearn the fear that is decaying our hearts and minds. This unlearning is a daily practice. Ahmed says he doesn't want to ever take his inventions to school anymore. I hope he's not like me. I hope he chooses not to shrink but to grow and grow. I'll be rooting for him. And for all the other little Ahmeds blooming everywhere.