None of the rides in Italy's Ai Pioppi playground are among the world's tallest, longest or fastest anything. But they might be some of the scariest.

Traveler Tom Scott recently visited the playground and amusement park, which looks like something that might've closed down years ago and was left to rust. But as his YouTube video shows, it's very much in operation and still terrifying visitors with its rides, all of which are powered by the riders themselves and plain old physics.

"I'll be honest: I sort of thought it was a myth. The idea of unattended, huge kinetic ride-on sculptures was surely false," Scott wrote in the description. "There was some evidence: a very artfully-shot documentary, and some shaky tourist footage, but I couldn't quite believe that something this potentially dangerous could still exist."

It's safe to say he's a believer now.

The rides were all built by a man named Bruno and are free to people who come to eat at his restaurant (although it might be a good idea to try them out before dinner, on an empty stomach). One of them, which Scott said is called the "Bicycle of Death," is a metal cage that takes its riders as far into a 360-degree loop as they can manage by pedaling... before gravity pulls them back down -- backwards.

Ironically, the only injury Scott suffered at Ai Pioppi didn't come from one of the rides, but by tripping when he was running. He sustained a cut to his face that required seven stitches.

"Entirely my fault, not theirs" he said in the video. 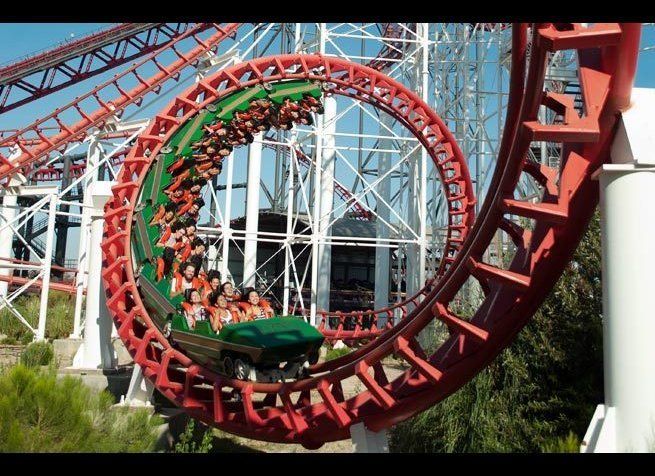 1 / 10
SIX FLAGS MAGIC MOUNTAIN
<em>Photo Credit: Courtesy of Six Flags Magic Mountain</em> Where: Valencia, California Main Attraction: Twisted Colossus <a href="https://www.sixflags.com/magicmountain" target="_hplink">Six Flags Magic Mountain</a> delivers untethered thrills with almost every variety of coaster imaginable. Joining the recent hybrid wooden and steel coaster craze, Magic Mountain ushers in a true feat of thrill engineering as the new Twisted Colossus rises from the foundation of its longstanding wooden classic Colossus. The ride will be the longest hybrid coaster in the world when it opens this spring, combining outrageous elements such as the “Top Gun Stall”—an inversion where the train slows down while upside down—and a Zero G Roll during the four-minute thrill. For the best odds at conquering all the coasters in one day, plan a mid-week visit to avoid crowds. Plan Your Trip: Visit <a href="http://www.fodors.com/world/north-america/usa/california/los-angeles/" target="_hplink">Fodor’s Los Angeles Travel Guide</a>