San Francisco -- Ai Weiwei, once China's most internationally famous prisoner, is occupying Alcatraz -- or at least his art installations are. Banned from traveling outside his home country, Ai has remotely produced a series of politically potent installations that now occupy the abandoned jail cells, mental wards and industrial buildings of America's most famous island prison.

Combining intricate Chinese kites, delicate porcelain flowers, 1.2 million Lego pieces and haunting audio recordings, the exhibit titled @Large: Ai Weiwei on Alcatraz serves as an interactive monument to political prisoners around the globe. Visitors exploring the exhibit's seven parts move from the majestic to the mundane: In one hall they come face to face with an explosively colorful Chinese dragon kite, while in another they can shop through binders full of dissidents and write them postcards. 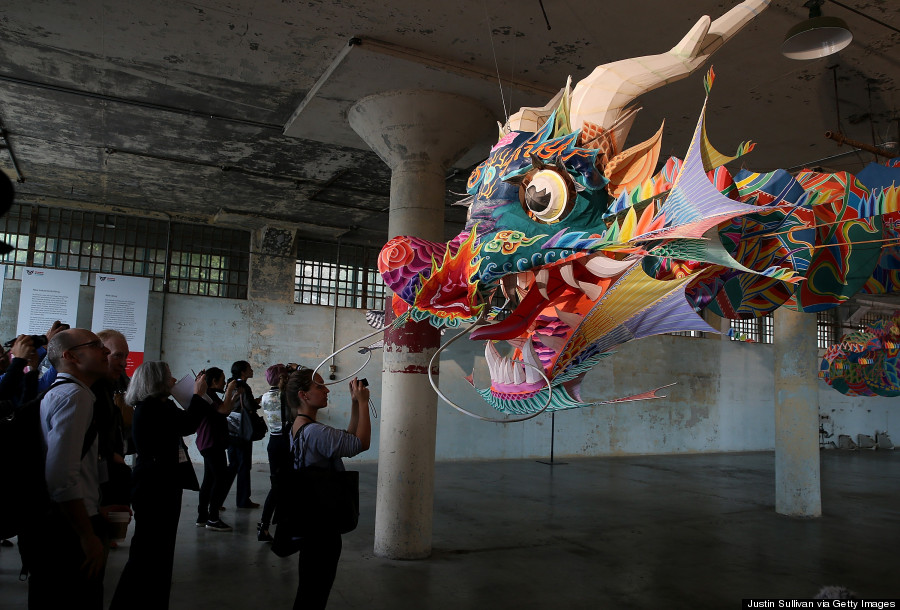 Ai Weiwei (pronounced "eye way-way") rose to prominence as a conceptual artist and architect during the 1990s and 2000s. But by 2005, Ai had turned his artistic renown and social media presence into a megaphone for searing critiques of the Chinese government. Those attacks ranged from the artistic to the obscene, and quickly made him a persona non grata in official circles and certain segments of the Chinese art scene.

Following a deadly 2008 earthquake in southwest China, Ai marshaled a team of volunteers who documented the names of children who perished -- a rebuke to local officials accused of profiting off shoddily built schools (referred to as "tofu construction"). Confrontations with the apparatus of state came to a head in 2011 when Ai was detained in isolation for 81 days and eventually charged with tax evasion, crimes that his supporters said were a mere front for intimidating Ai. 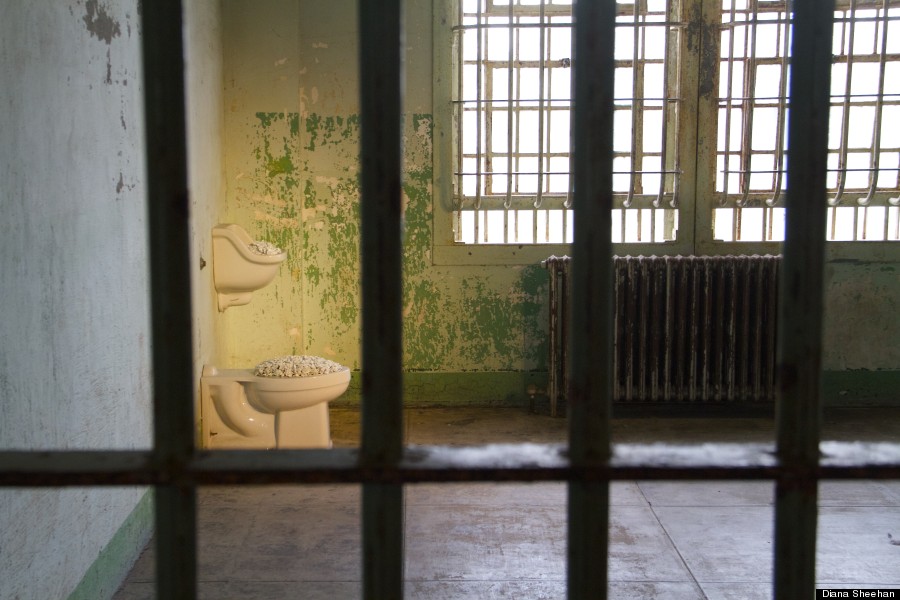 A toilet bowl bursting with porcelain flowers in Alcatraz's health ward. (Diana Sheehan for The WorldPost)

Now free from detention, Ai still remains under intense surveillance and is banned from traveling abroad. That tension between artistic freedom and physical confinement serves as the explicit theme of @Large, and it also presented curators with a unique challenge: how to create an immersive site-specific experience when the artist can't visit the site.

Working closely with the For-Site foundation, Ai's team designed, modeled and produced the installations using detailed maps and precise measurements of the spaces. Alcatraz is a national park -- one steeped in both popular lore and historical significance.

"It's mentally and psychologically interesting to me, because in a way it brings us inside the life of the jail," Ai told Smithsonian Magazine. "The inmates in a prison have to follow very clear instructions, have to follow them exactly, and so do we [as site artists] ... The goal is not really to create something beautiful, but something precise." 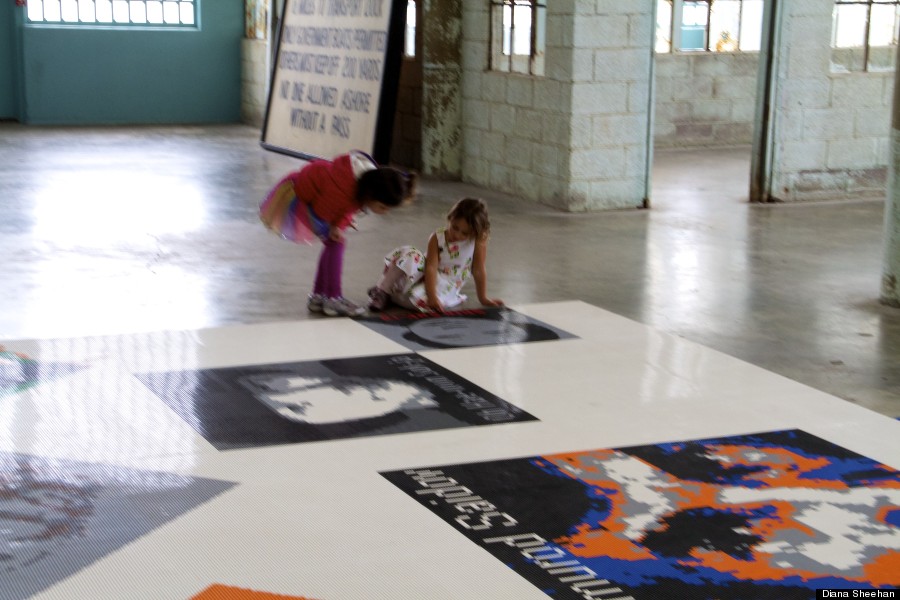 That precision came slightly unglued on a Tuesday morning in January when a group of small children streamed into the industrial hall that houses "Trace," a sprawling collection of flat Lego portraits of imprisoned activists from around the globe. Told to sit next to their favorite picture, one toddler plopped down on the face of an imprisoned Iranian activist, separating the woman's left jawbone in the process.

The portrait was quickly reassembled by an anxious mother, but one hopes the artist wouldn't mind -- among Ai's most iconic works is a photo series depicting him nonchalantly dropping a 2,000-year-old vase. (It should be noted, however, that Ai was considerably less charitable to a Miami artist who a smashed one of Ai's own vases.)

One of Ai's most famous pieces, "Dropping a Han Dynasty Urn."

Adjoining the Legoland tribute to activists is the most visually striking portion of the exhibit -- a snarling (or smiling?) Chinese dragon kite suspended in flight. The circular discs that make up the dragon's body are stamped with quotes from Edward Snowden, Nelson Mandela and Ai himself.

"The dragon in the old times, classically, is symbolic of the emperor, but we use that image to represent personal freedom. We think everybody has this personal power," Ai said in a video about the exhibit. "We want [the dragon] itself to feel light, cheerful, full of energy and a lot of hope -- even with joy. But it still reflects the will of this prisoner." 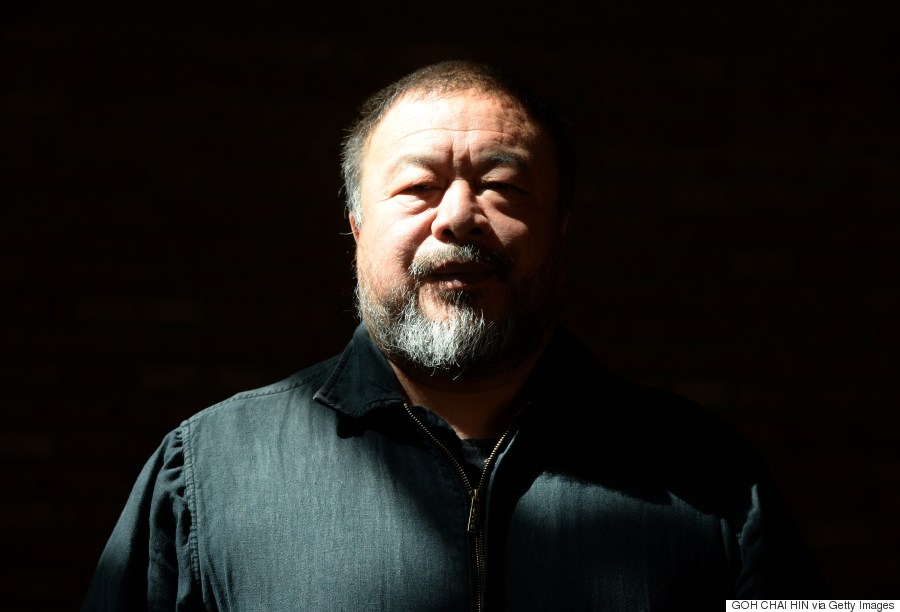 Alcatraz's main prison building houses several more installations that blend seamlessly into their surroundings. In the former psychiatric ward, toilet bowls and sinks now house intricate porcelain models of flowers and shrubs in bloom. Rich in historical allusion (to China's devastating Hundred Flowers Campaign of 1956, for starters), the installation perhaps works better when allowed to stand on its own -- as a subtle suggestion of beauty sprouting from lifeless environments. 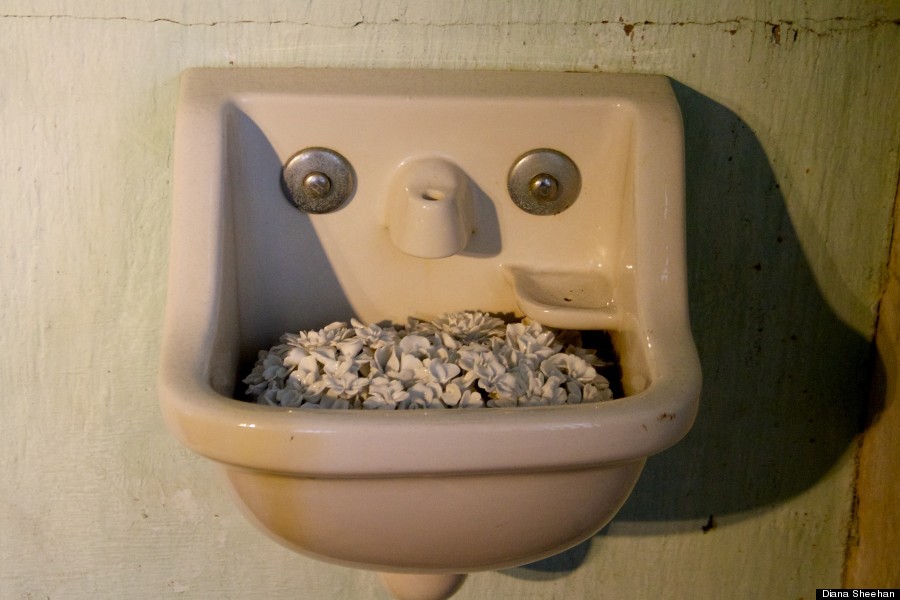 Before exiting the exhibit, tourists are invited to shop through a catalogue of imprisoned activists from around the world. If they find one to their liking, they can write a postcard that the curators say will be delivered to the activist (or at least the prison where the activist is held).

Snaking through the cellblocks and resonating across the island, Ai's message finds a receptive audience 5,920 miles from his Beijing studio.

"The misconception of totalitarianism is that freedom can be imprisoned," Ai says on For-Site's website. "This is not the case. When you constrain freedom, freedom will take flight and land on a windowsill."

Scroll down for more photos from @Large: Ai Weiwei on Alcatraz 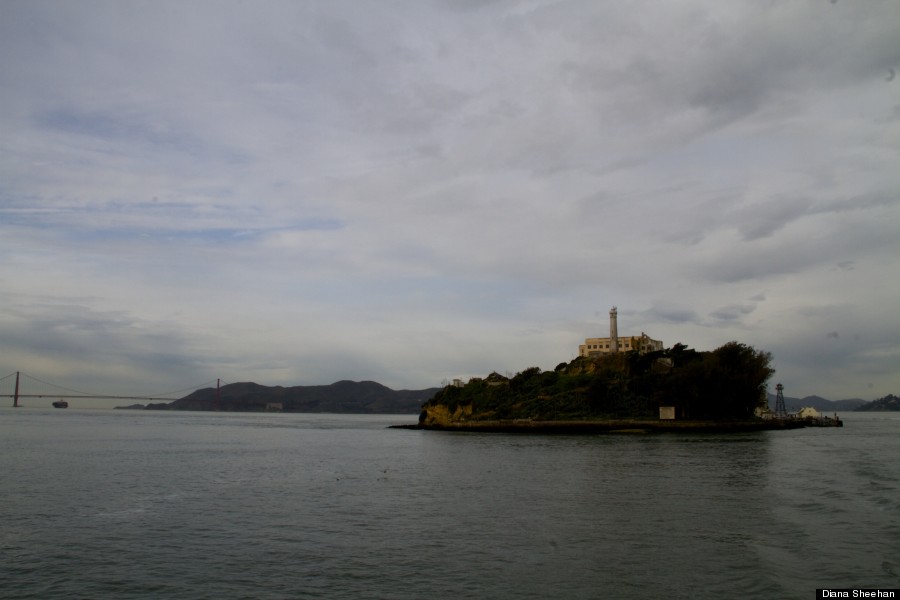 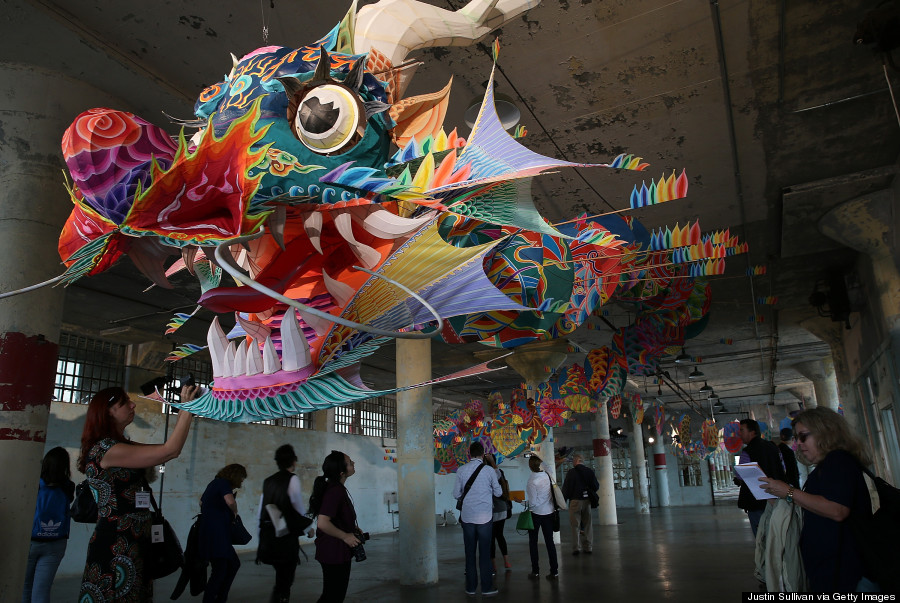 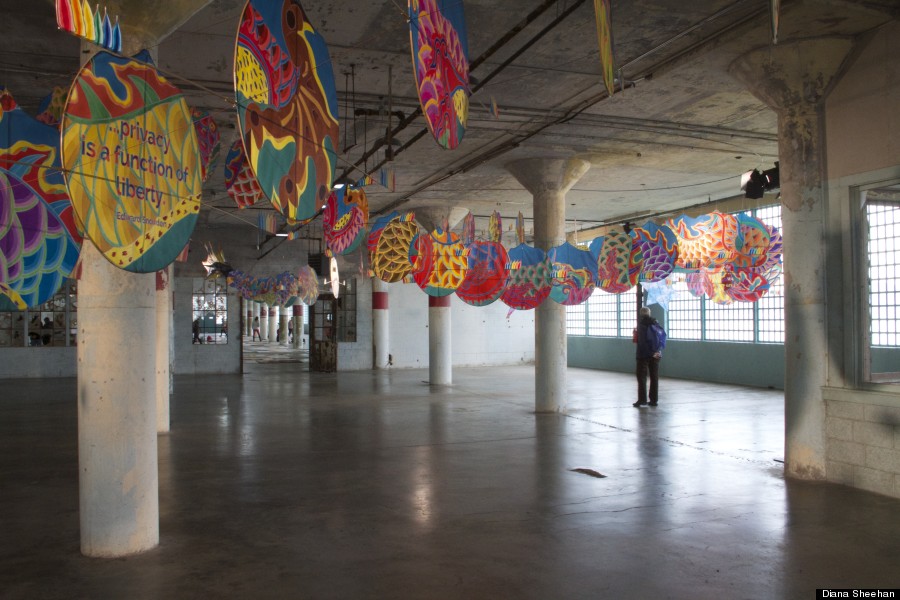 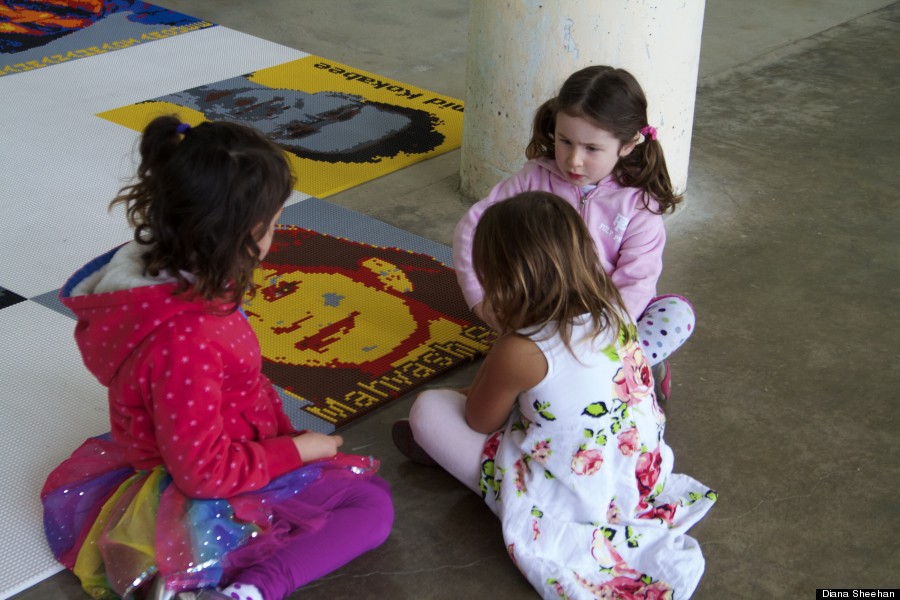 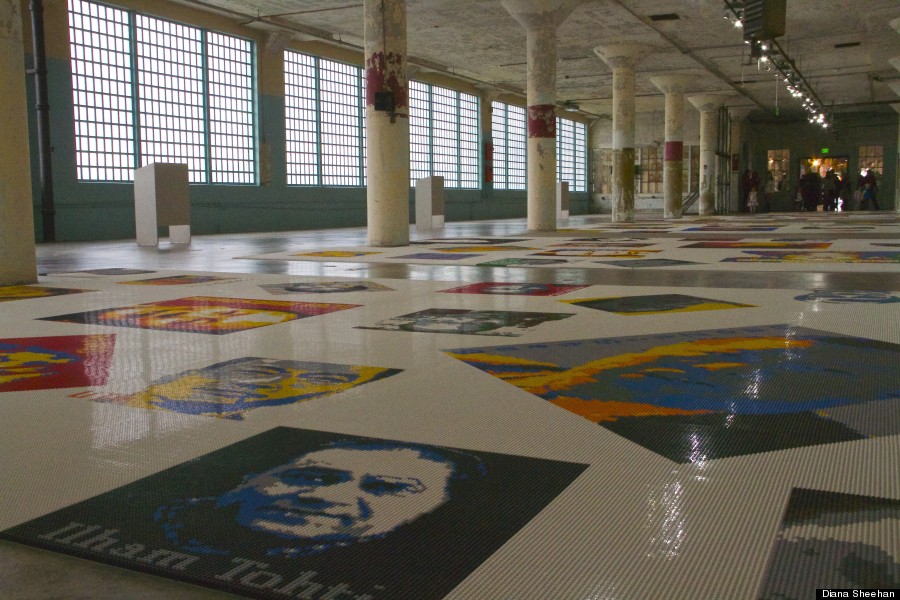 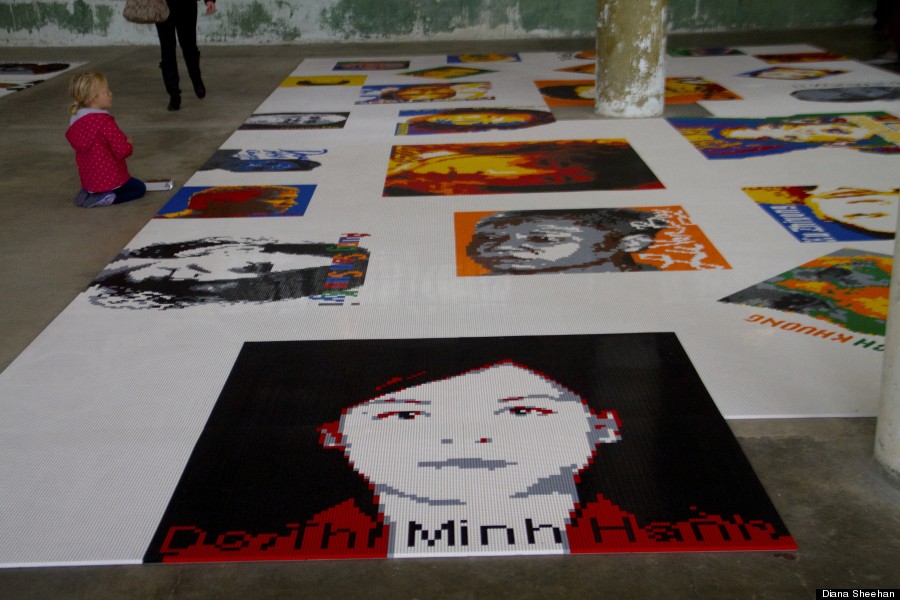 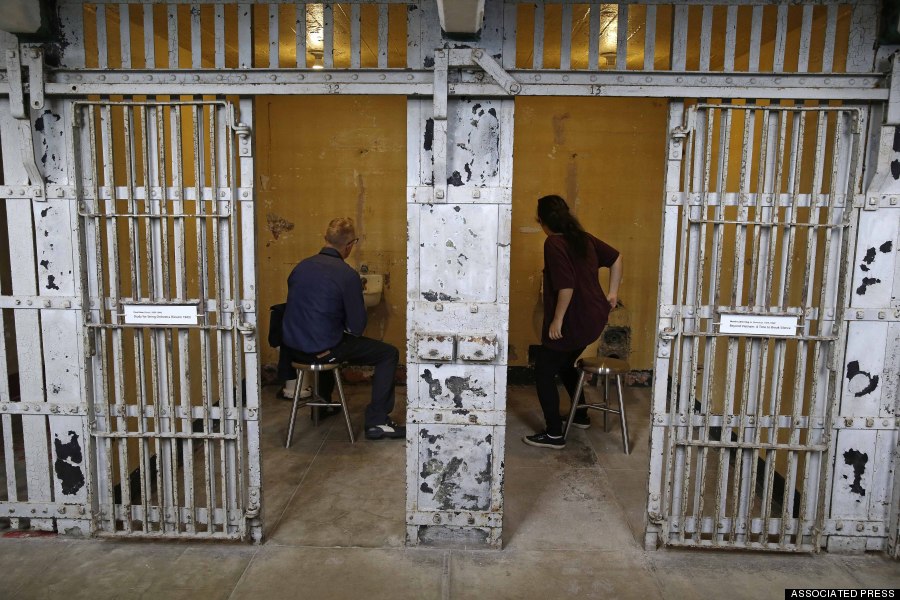 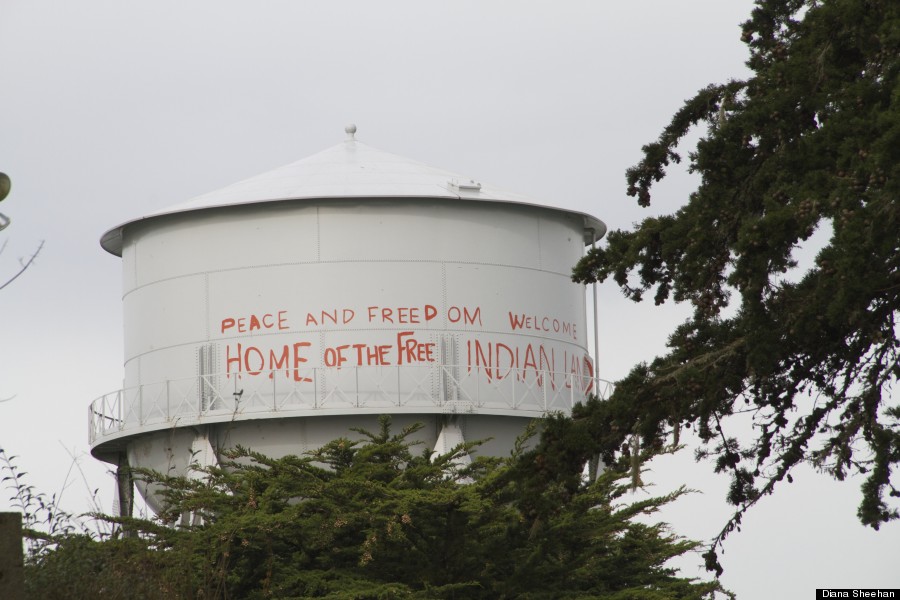 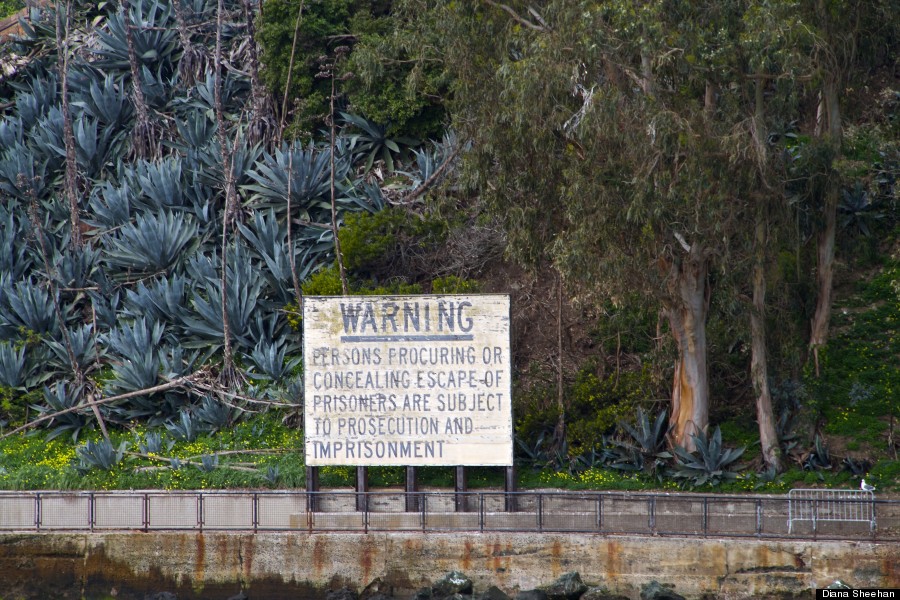