It's a famous story in Christopher Tsai's family, of his grandfather, who had flown in for a visit in the mid-1960s, demanding an explanation for “that thing on the ceiling.”

The “thing,” dangling from the Tsai family home in Connecticut, was a mobile. Not just any but an original Alexander Calder, owned by Christopher’s dad, the legendary financier, Gerald Tsai. Grandpa Tsai was “very disturbed,” Tsai recounts, “that my father would spend so much money on what to him looked like scrap metal.”

In hindsight, the mobile’s cost -- $50,000 -- was nothing. Today Calders set records, selling in the tens and hundreds of millions. Many of the airy contraptions passed through Tsai’s father’s hands -- he became a great collector not only of Calder but of Joan Mitchell, whose works he scooped up at “nothing near the prices you see today."

Speaking from his own art-studded Manhattan townhouse, Tsai is every bit the child of his father. The story of his grandfather's distaste stuck with him. The lesson? Trust your convictions no matter the tastes of others. The result? In just around a decade, Tsai has become the foremost collector of one of today’s greatest living artists, Ai Weiwei. So deep and broad is Tsai’s collection, he plans to turn it into the first museum devoted to the renegade artist. 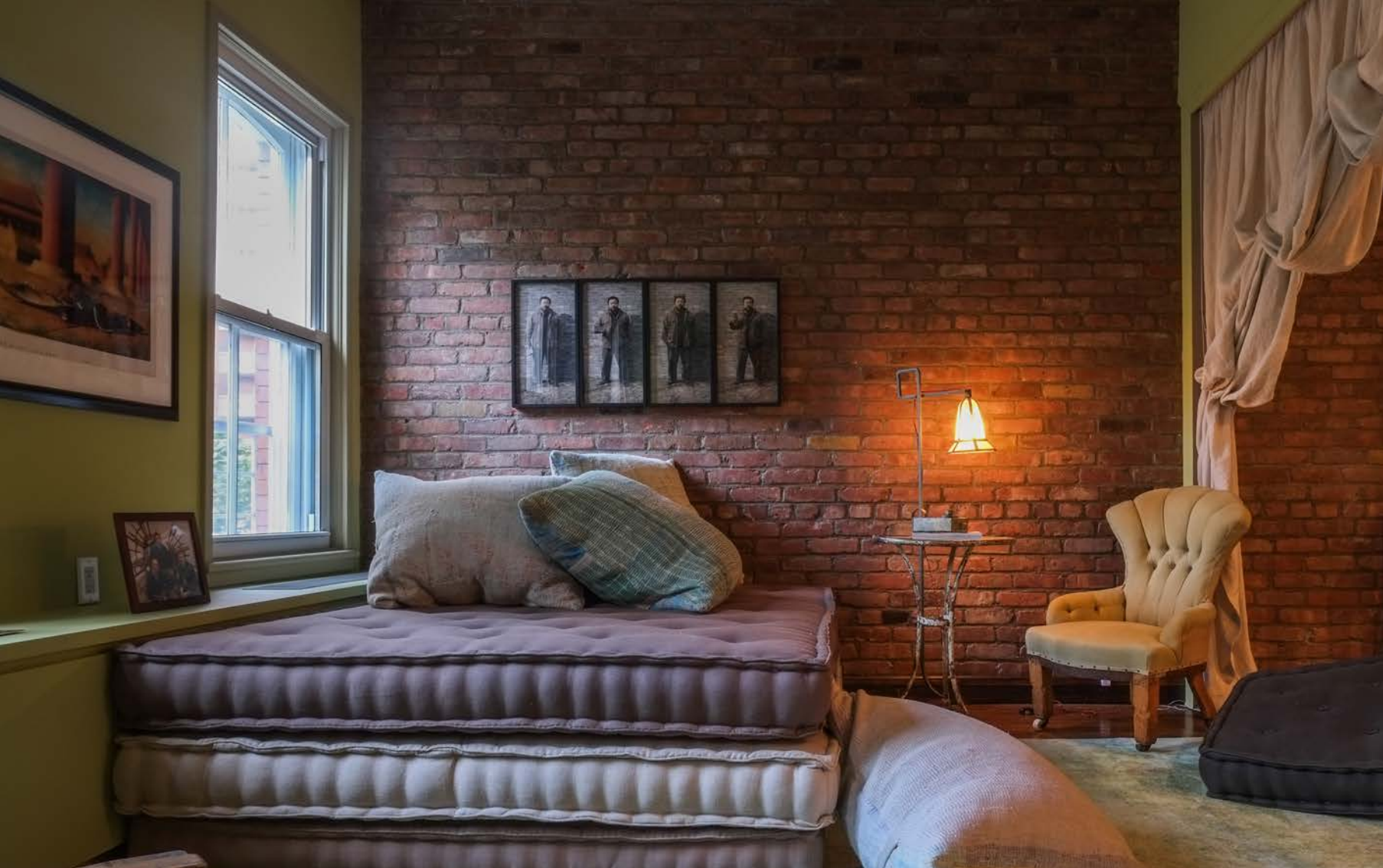 “My dad always said to focus on the best,” Tsai says matter-of-factly, when asked how he chose to invest exclusively in such a star.

The “best,” of course, is easier referenced than found. Tsai’s father, a self-made billionaire, was uniquely skilled. Born and raised in Shanghai, he scaled the Wall Street ladder in midcentury America despite the odds, transforming Fidelity Capital Fund into a money-minter before the age of 30. He had a knack for picking big winners, the so-called “glamour stocks,” with such ease his baffled colleagues whispered he must have “mystical powers from the Orient,” as one biographer put it, “which somehow allowed him to perceive the future.”

Tsai too carries a whiff of a sixth sense. A hedge fund manager by day, he and his now-husband André Stockamp started collecting in earnest in the early aughts. Ai had already designed the Olympic “Bird’s Nest” stadium by then, but he was flanked by equals in the Chinese art world, any of whom a collector might find intriguing. Indeed, one such was Yue Minjun, an artist whose pieces Tsai and Stockamp bought in their early days, before they thought to focus on Ai.

The couple had grand ambitions. They did not want to make money off art, but to “build a collection that would be meaningful to history,” a feat they soon decided meant picking a single artist to patronize. The Chinese contemporary market was a great place to scout. Tsai, who is half-Chinese, could make his way around it. And all signs pointed to an imminent explosion, yet works were still “relatively inexpensive,” he recalls.

They could not have predicted Ai’s stratospheric rise, which came in the aftermath of the 2008 Sichuan earthquake. The artist's series of devastating probes into fatalities and government cover-ups sealed his status as the world’s best loved enemy of the state, globally known yet trapped in Beijing, his passport (still) held on vague charges of "economic crimes."

What drew the couple to Ai before all that, Tsai says, was a question all collectors reckon with: “What do you love?”

They loved Ai's “conceptual” agility, his inclination for sculpture or performance versus a string of paintings on the wall. Indeed, the couple’s first commission was unusual: they had Ai design a home in the Hudson Valley town of Ancram, New York. To date, it is the artist’s only building in America. A series of light-filled, corrugated metal cubes, it functioned for years as the couple’s vacation home -- a sort of living sculpture aptly appointed, with an entry shelf by Zaha Hadid, and, naturally, art by Ai. Tsai and Stockamp sold it last year, finding they were heading up less and less frequently since the birth of their two daughters. 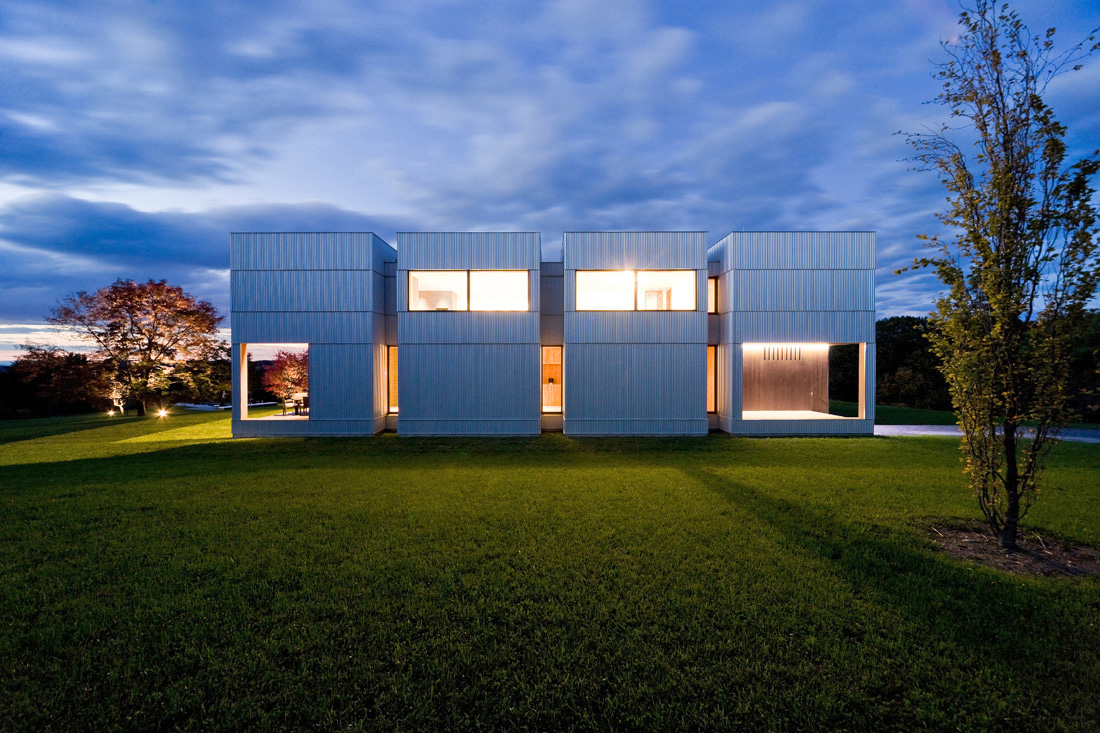 In the interim, they collected. With Ai’s guidance, the couple amassed some 40 of his works, including Tsai's favorite get: a set of a dozen gilded Zodiac heads stationed throughout the couple's four-story Upper East Side digs.

More than a century old, this main home is itself something of an installation. Ornate beams from a 17th century French chapel line the ceiling, and a long downstairs drawing room opens onto a large garden with blossoming trees.

In this old world setting, Ai is everywhere. Qing dynasty chairs, part of his “Fairytale” series, sit in bedrooms. A black and white handbag embedded with an umbrella invites questions in an upstairs sitting room (it was for a fashion show about function and form, for which Ai also designed a "quintessential New York bag" fixed with a hammer.)

On the second floor lie twisted steel rebars recovered from schools destroyed in the Sichuan quake, which the family steps around. The girls, now just past toddler age, know not to touch. Other pieces, including a 50-foot-tall “tree” sculpture whose size, Tsai dryly notes, makes it “hard to display in Manhattan,” are in storage, or shuttled from museum to museum. 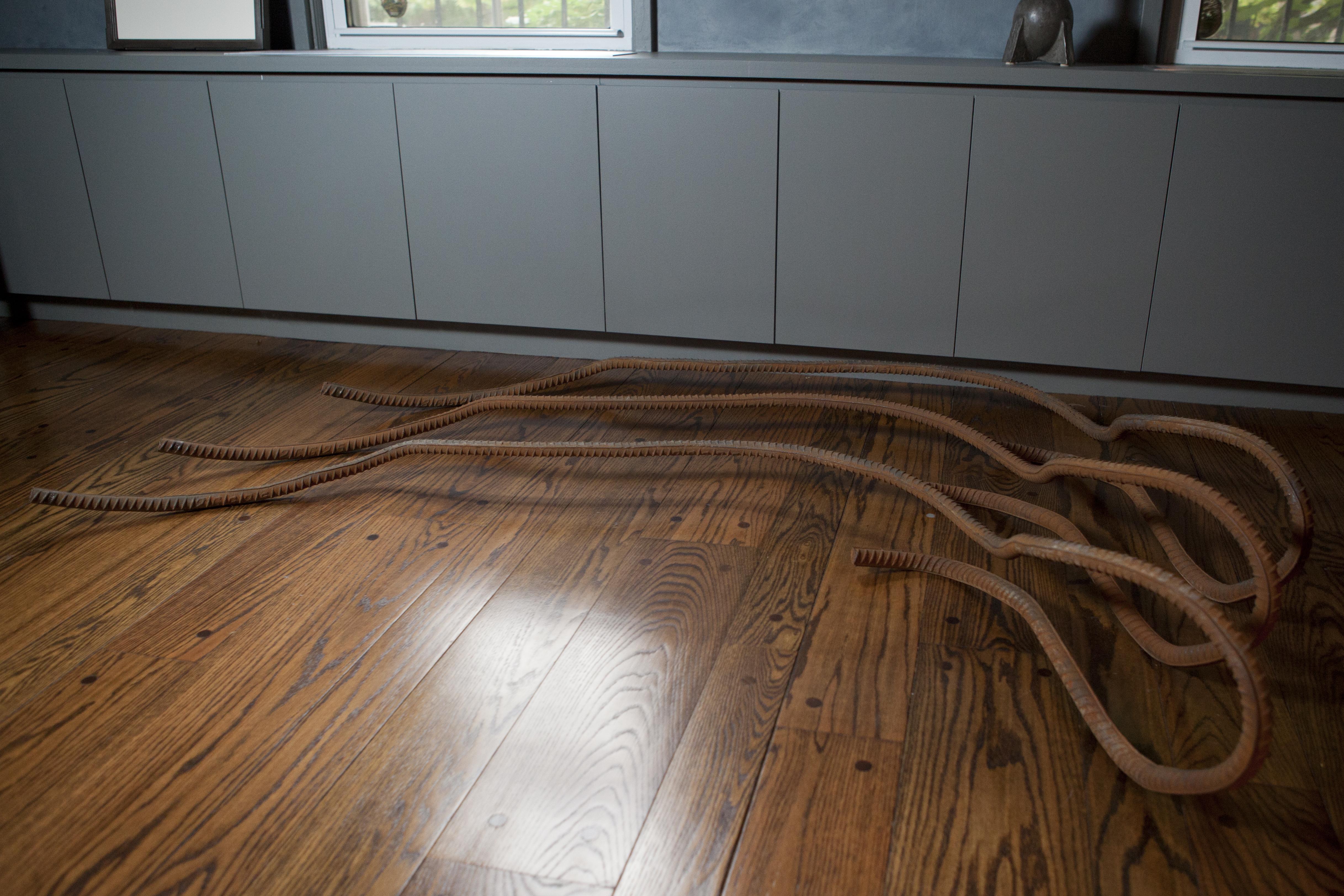 Tsai acknowledges the parallels with his day job. Both long-short funds and art markets hinge on “undervalued,” “high quality” investments with “great growth potential.” And patience. “It’s often the case,” Tsai says of commercial investing, “that we will start buying a company and it takes six months to a year before the street recognizes that there is value there and the stock appreciates.”

Now that the street has recognized Ai, so to speak, the couple are gearing up. The plan is to grow their collection to 100 or so pieces before launching a museum. When completed, it will be that rare thing in the Western world, a single-artist museum devoted to an Asian. So far, the only other such is the Isamu Noguchi museum in New York.

Artists rarely live to see a collection grow, but Ai has essentially “curated the development” of this one, Tsai says, adding that he is in touch with the artist’s studio on a weekly basis.

As a result, the Stockamp-Tsai collection is built along museum principles, with works from every decade of Ai’s production, including a number of rare pieces from the 1970s. Beyond the museum’s future content, Tsai isn’t divulging much. He doesn’t yet know the budget, whether the museum will be privately or publicly funded, or even where it might be located. Only that “it has to be done right, and right doesn’t come cheap.” 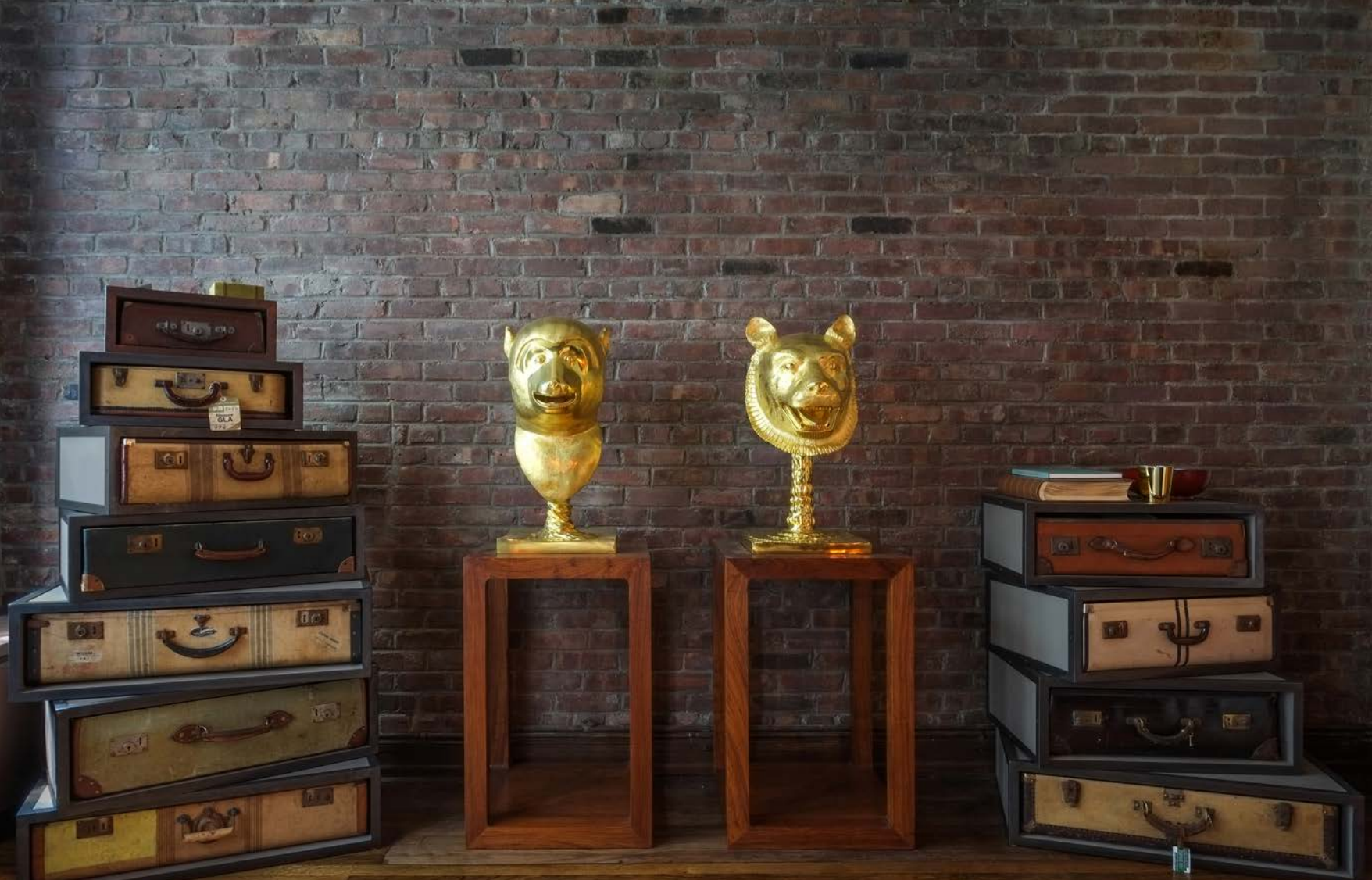 One influence Tsai does name is the Cy Twombly Gallery, part of the vast Menil Collection in Houston, Texas. It was on a business trip, during a detour to the gallery, that he had the idea of a museum in the first place. He’d stopped at “Four Seasons,” a multi-canvas work that spans a wall. There, seated on one of the gallery’s white benches, he had a “dream,” as he calls it, of drawing Ai’s work out of its various nooks and crannies -- the storage lockers, and bedrooms.

“When you start out collecting piece by piece, you put the work in your home. You live with it,” he says now, flanked, as if to prove the point, by golden animal heads. “As it grows bigger and bigger, it dawns on you that it should be seen. It should be enjoyed by everybody.”