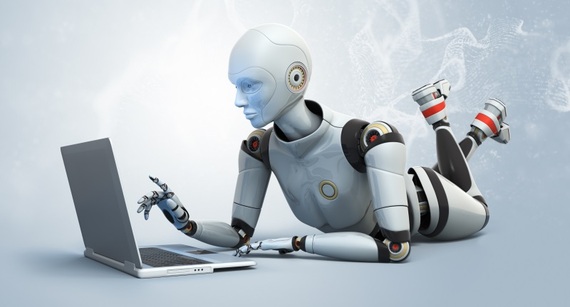 Make no mistake, we are living in the future. We can store millions of files into a piece of hardware the size of our pinky nail. We can converse face-to-face while thousands of miles away from each other. We have cars that can drive themselves. We have personal computers and entertainment systems built into tiny phones that fit into our pockets. We have amazing robots that can run, swim, fly, and speak.

But -- despite what you’ve likely read in the headlines on social media and the internet recently -- we have yet to create an Artificial Intelligence (AI) that can write an amazing screenplay. In fact, we haven’t even been able to create one that can write something as “good” as Troll 2.

Instead, we’ve created an AI that writes nearly incoherent gibberish.

Hollywood and tech fans raised their eyebrows in response to this week’s headlines that claimed an AI had written a screenplay -- and that it was “hilarious and compelling.”

The AI is what its creators -- director Oscar Sharp and New York University AI researcher Ross Goodwin -- call a recurrent neural network named Benjamin. Sharp met Goodwin, a former ghost writer who just earned a master’s degree from NYU while studying natural language processing and neural networks, at NYU. They often talked in depth about the possibilities of creating an AI that could write an original piece of storytelling.

So eventually they decided to have a go at it. The software they utilized for “Benjamin” originated from software used for text recognition. We use it every day on our smart phones as we text and email. The software often predicts what we are about to write.

They configured an algorithm that would allow Benjamin to process dozens of science fiction screenplays fed to him by Sharp and Goodwin. The science fiction scripts were mostly from the 1980s and 1990s -- Highlander: Endgame, Ghostbusters, The Fifth Element, Escape from New York, Event Horizon, Dark City, and many, many more. The scripts were uploaded to Benjamin’s software in text file format. Benjamin dissected them down to the letter, learning to predict which letters tended to follow each other and from there which words and phrases tended to occur together.

This LSTM algorithm has the ability to predict whole paragraphs rather than just a few words at a time. It also generates “original” sentences, as opposed to cutting and pasting sentences together from the source content.

As Benjamin learned more, he “acquired” the ability to imitate the structure of a screenplay, yet couldn’t recognize proper names, due to the fact that they weren’t as predictable as words used in sentences. To solve that issue, Goodwin changed all of the character names in Benjamin’s screenplay source content to single letters. This is why the characters in the below short film version of Benjamin’s script are named H, H2, and C. Apparently, the original screenplay had two different characters named H. One of them was renamed H2 to avoid confusion.

After that, they fed Benjamin with random seeds. These were prompts that gave Benjamin information to work with.

And then they turned Benjamin on.

One line of description reads:

He picks up a light screen and fights the security forces of the particles of a transmission on his face.

Sharp then shot the movie in just 48 hours for the annual film festival Sci-Fi London. One of the lead characters was played by Silicon Valley star Thomas Middleditch.

Here is the result of taking Benjamin’s script and adapting it for the screen:

Needless to say, it’s not what you’d call “hilarious and compelling,” at least not in the context of what most people thought when they originally read the headlines.

The dialogue is scattered, odd, and often incoherent. The story makes virtually no sense.

Yet, despite the sigh of relief that screenwriters can now feel after having seen the end product, it still is hilarious and compelling in its own right.

It’s the same type of hilarious and compelling that we experience as children -- and sometimes as adults -- after filling in the blanks of Mad Libs and reading them out loud. The idiocy of the random content forces us to laugh. The randomness, despite making virtually no coherent sense, turns out to be funny.

Screenwriting -- and any fiction writing for that matter -- is magic that cannot be replicated by a formula. It’s an organic melding of the analytical human mind and its creative side that often goes unexplained by science. Yes, one could argue that our mind -- analytical or creative -- is an organic computer that is processing vast amounts of information to create what eventually becomes a screenplay. Sure, this information has been compiled through many channels of memory and input.

The movies and shows that we watch. The books we read. The music we listen to. The experiences we have in life and the memories we remember or store in the back of our minds. These are elements that are selected, compiled, and organized into what will eventually become the stories we are trying to tell.

But that information -- like what was fed to Benjamin -- isn’t the source of successful writing. It’s how the information is brought together that matters. Until scientists discover the root of that magic, no Artificial Intelligence will be able to truly create a screenplay of their own. They may be able to multiply the abilities that Sharp and Goodwin have created with Benjamin. They may be able to fine-tune them and expand upon them. But Artificial Intelligence will never be able to do what a living and breathing screenwriter can do. At least not in this lifetime.

Benjamin, with all due respect, didn’t write a screenplay. He’s no more of a screenwriter than the sheet of paper used to capture the pen, pencil, or marker of a child filling out a Mad Libs page.

If anything, the Sunspring film and the way it was written is nothing more than a compelling experiment that proves how amazing screenwriters really are.