United States officials believe it to be too risky, but sending aid airdrops is necessary to help Syrians, especially in the besieged Eastern city of Deir Ezzor, where thousands of Syrians are starving. The regime-controlled city has been under siege by ISIS for the last 13 months.

Although airdrops would serve as just temporary relief, the city is in desperate need for food. It is described as the worst siege in Syria, as no food or medical supplies have been allowed in the city and the regime exploits the situation by selling the limited food for higher prices.

People are selling all they have, including houses, gold and other valuables, to secure a meal. While the so-called Islamic State stops any food or supplies from entering by land, the regime does not allow for things to be transported by air and blocks people from leaving the city.

A growing number of people have died from malnutrition, including children, with nearly 30 claimed cases of death due to malnutrition thus far. Hospitals have grown weak, as they continue to run out of supplies and personnel. 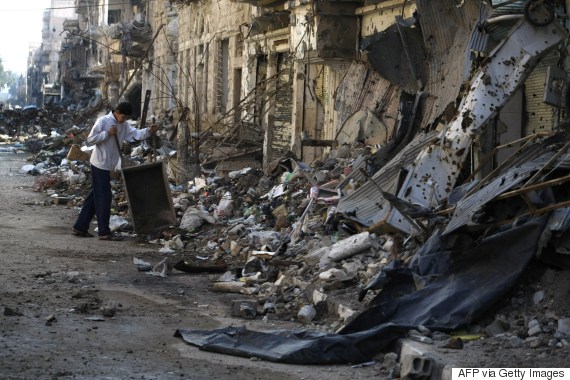 A Syrian child clears debris from a street in the northeastern city of Deir Ezzor on January 23, 2014. (Ahmad Aboud/Getty Images)

The international community has completely ignored the people in Deir Ezzor city, including the United Nations, intergovernmental, and international organizations, not even advocating to provide the basic medical supplies and food that has become scarce.

The United Nations has delivered millions of dollars worth of aid to regime-held territories, but has stayed silent about the areas under siege, like Deir Ezzor city. As a tool of war, the United Nations has defied its principle of impartiality, by utilizing aid as a political tool and not delivering it to those most in need.

Since January 15, ISIS launched an offensive in an attempt to gain control of Deir Ezzor City, making the already grim situation even grimmer. People have not had access to any kind of food for the last seven days, while enduring heavy bombing and gunfire. Due to the most recent events, the already-degrading supply of food within the city has become next to nothing, and the hospital has been unable to to treat people as it lacks the basic supplies to do so. In the last week, over 60 people have died due to the conditions. 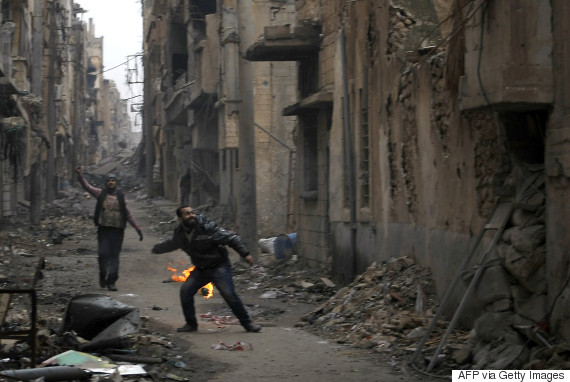 A rebel fighter prepares to throw a fire ball on a front line of Syria's northeastern city of Deir Ezzor on January 10, 2014. (Ahmad Aboud/Getty Images)

Hundreds of thousands of people are starving to death and there is a desperate need for action. The beginning step being airdrops of aid and food to the suffering people of Deir Ezzor City. As disclosed by the Telegraph, the United Nations has given approval to western countries to carry out airdrops over besieged Syrian towns without regime permission.

The conditions of Deir Ezzor City has become dire and people are dying everyday as a result. Airdrops would at least ensure there is some supply of food within the city to stop people dying from malnutrition due to the ISIS imposed siege.

The second step would be the intervention of the United Nations to insure the proper distribution of aid to civilians in Deir Ezzor city. The regime and regime soldiers have exploited the people of Deir Ezzor city for the last 13 months, selling food at extraordinarily high prices. The United Nations must intervene to avoid such extended exploitation of aid and resources when delivered by the international community. This includes personnel on the ground to oversee the process and insure civilians are receiving the necessary food and aid.

Deir Ezzor City rapidly needs food and medical supplies. If you are reading this, I encourage you to act by pressuring your governments and the United Nations. The World Food Program estimates that over two million tons of aid have been delivered via airdrops in the past two decades to areas that are hard to reach.

Every day more people in Deir Ezzor city are dying of starvation and it should not continue to be ignored.