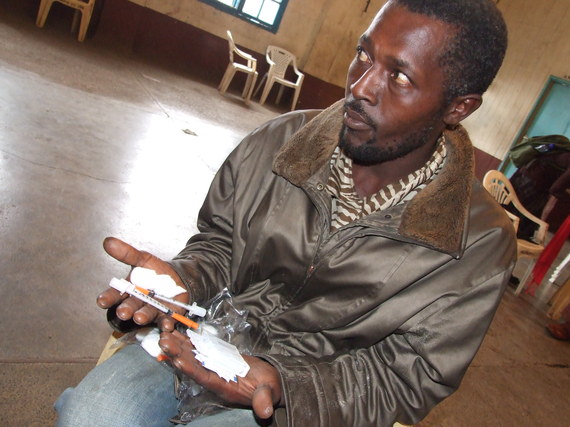 Abubakar, an injecting drug user since 1989, receives a safe injecting kit at a community center in Nairobi, in a project supported by the International HIV/AIDS Alliance.

In 2010, the United Nations announced that an AIDS-free generation was achievable if we focused on the most disadvantaged communities.

Almost four years later, three leading harm reduction organizations are telling us we are not paying enough attention to one of those communities -- people who inject drugs (PWID) -- and that "an AIDS-free generation will not be possible" if the rate and pace of investment in harm reduction continues.

Harm reduction is a range of public health policies designed to reduce the harmful consequences associated with, in this case, injecting drug use.

To coincide with the 20th International AIDS Conference in Melbourne, Australia, Harm Reduction International, the International Drug Policy Consortium and the International HIV/AIDS Alliance are publishing a report that says that due to changing donor policies, HIV prevention services for PWID are not being prioritized and this failure to invest will bring an exponential rise in HIV transmission which will impose much higher costs on governments and donors.

"The world is not on track to reduce HIV transmission among people who inject drugs by 50 percent, as recent evidence suggests little change in the HIV burden in this population," according to the 2013 UNAIDS Report on the Global AIDS Epidemic. "HIV prevention coverage for people who inject drugs remains low, with only two of the 32 reporting countries providing the recommended minimum of at least 200 sterile syringes per year for each person who injects drugs."

Fully funding harm reduction in low- and middle-income countries would cost $2.3 billion in 2015, according to the report, and current funding levels amount to only 7 percent of estimated need.

But here's the thing that might surprise you: The organizations are not asking for more money for harm reduction (although I'm sure they would not mind getting it). They're asking that existing funds be spent differently.

"Drug law enforcement has failed to reduce supply or demand, yet one tenth of one year's drug enforcement spending would cover HIV prevention for people who inject drugs for four years," said Susie McLean, senior advisor on drug use and HIV at the International HIV/AIDS Alliance. "Drug users may be politically unpopular but we know from bitter experience that punishing them doesn't work and only serves to push them away from vital health services."

In Kenya earlier this year, I saw the limits of what effective harm reduction programs can do without more resources. The Kenya AIDS NGOs Consortium (KANCO) and the International HIV/AIDS Alliance are implementing a harm reduction program that began in 2011 and aims to reach 3,000 injecting drug users. It seems to be a successful program, given that they have almost reached that target (2,828 PWID, as of May 2014) well before the end of the project.

But KANCO estimates that those 2,828 PWID comprise only 15 percent of the estimated total number of 18,327 PWID in Kenya. The other 85 percent cannot currently be helped due to resource constraints.

The report by the three harm reduction agencies, entitled "The funding crisis for HIV-related harm reduction: Donor retreat, government neglect and the way forward," identifies four solutions to this crisis:

Invest strategically in harm reduction: Our understanding of what is currently being spent on harm reduction must improve. Donors and governments must get better at tracking their investments and doing it transparently, based on principles of effectiveness and cost-efficiency. Funds must be allocated to interventions known to be effective, even if not politically popular.

Increase national harm reduction investment: National governments are investing more in their HIV responses but very few are spending the new money on harm reduction, even where most new infections are spread by sharing needles. There is an urgent need for governments to change their attitudes and prioritize harm reduction. An overreliance on international funds for services for PWID is an unsustainable strategy to end AIDS.

Rebalance existing resources in favor of health and harm reduction: The report calls for better spending of existing resources. It is estimated that drug enforcement spending across policing, prisons, courts and probation costs is in excess of $100 billion annually. That figure is uncertain. But even if it is only a quarter of that, just a tenth of that quarter would be enough to fund all global HIV prevention for people who inject drug for four years.

The bottom line: The AIDS-free generation we all want will not happen if we neglect the critical but unpopular group of people who inject drugs.

The report, "The funding crisis for HIV-related harm reduction: Donor retreat, government neglect and the way forward," will be published on July 21, available at this site.