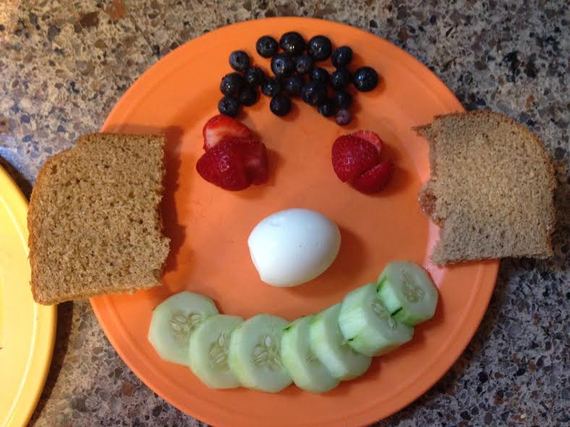 There is this weird thing that happens when you have multiple children.

You only add them one at a time, so you start out so well. Setting up that nursery in old-fashioned airplanes. Displaying books on the dresser so they're all nice and neat and you can see each one. Organizing outings to the park and the pool and the children's museum with all his little infant buddies.

And then you have more children. You start letting things fall through the cracks. You start losing track of time. You start slacking when it comes to things like...birthdays.

Not long ago we celebrated our third son's fifth birthday. I forgot to plan his party.

So I scheduled it for two weeks after his actual birth day and then had to listen to him every single morning say, "Well, I guess I'm not having a birthday party this year" after I answered the initial, "Is TODAY my birthday party?" with a negative.

If only 5-year-olds weren't so bad at time relativity.

He can count to 100, but he couldn't count the 10 days between the day he asked and the day with a box said "BIRTHDAY PARTY" in big blue letters on the calendar beside the fridge.

One day he took the guilt a little farther.

"I didn't get a cupcake for breakfast on my birthday," he said.

It's tradition in our house that the birthday boy gets a cupcake for breakfast. He got cinnamon toast this year, because I'm doing just fine.

"But you had cinnamon toast," I said.

He looked at me like he was the most neglected boy in the world.

"We'll plan what we're having for your birthday party tonight," I said. "How about that?"

He perked up. "How much longer until after dinner?" he said.

We ate our dinner, did all the chores and then sat down at the table to plan. I had my pen and notebook at the ready.

"What theme do you want?" Husband asked.

"Like Robin Hood or Treasure Island or Star Wars," our 8-year-old bookworm said.

"I want Penguins of Madagascar with ninjas," the birthday-boy-for-the-last-week said.

My husband and I looked at each other with the same "What the--" expression on our faces. But I knew there was a solution. We live in an artsy fartsy world, after all.

Now, I used to be a pretty crafty person. When my oldest started kindergarten, I sent him there with five reusable napkins and five handkerchiefs complete with a hand-embroidered picture drawn by all the members of his family so he wouldn't feel lonely during school. I know. I realize this is classic overachiever behavior. Don't worry. It didn't last long. When the next-in-line started school, he was lucky to get two of each. The third started kindergarten four weeks ago and I've done all of zero.

My closet is full of material I always intended to use for on-the-go crayon bags and custom backpacks and notebook covers. There are baskets filled with ripped-up books I plan on using for craft projects someday (I've been waiting three years for someday. So far.). I have a bag that sits beside the living room couch for when the kids are all serenely playing and I can take out that blanket I've been crocheting for five years (mostly because boys hardly ever serenely play).

But the feed for a "Penguins of Madagascar party" was crazy. Homemade cakes with 3D penguins made from icing standing up on top. Elaborate crafts that we could have for all the kids at the party (and who would clean up the mess? Me.). Coloring pages and games and party favors with penguins hand-drawn on the sides of cups.

Shouldn't have even looked.

When the oldest boy had his Star Wars party, I made Ham Solo sandwiches and Wookie cookies and Yoda soda. When my 5-year-old's birthday party rolled around, I baked chocolate cookies and called them bombs.

I still feel a little guilty about it.

We live in such a Pinterest-perfect world. People post those elaborate cakes where the Penguins of Madagascar are standing up on a no-lines-in-the-icing cake, striking their elaborate fight poses, and I wonder how anyone plans a birthday anymore.

"Think you could do this?" I asked Husband, because he's the artist.

"Absolutely not," he said. "Who has time for that?"

So it's not a party unless it's a Pinterest party? Unless we spend two whole days making sure everything is perfect? Unless someone can tell what that blob on the cake is?

Pinterest can go take a walk all the way to Antarctica. Hey, Pinterest: Don't let the ice numb your backside on the way out.

I'll take my imperfect party with the rowdy kids and the penguin box game we never finished and the cake balls we called eggs any day.

No. They're going to shove that cake in their pie holes. We should, too (well, maybe use a fork), because it's dang delicious.

When my son's party was over, I pulled him close and asked him if he enjoyed it.

And he meant it.

He started to run off and then turned back around. "Can I have another poop cupcake, Mama?"

I thought he was joking, because, well, boys and jokes. The grosser the better. But my boy was dead serious. He pointed to two cupcakes left on the table, each with chocolate icing swirled up high.

I laughed so hard.

Guess those pretty cupcakes weren't as pretty as I thought.

More:
parenting adviceParenting parents-dadsParentsparents-moms
Newsletter Sign Up
Raise the kind of person you'd like to know
Subscribe to our parenting newsletter.
Successfully Subscribed!
Realness delivered to your inbox