WASHINGTON -- The American Israel Public Affairs Committee on Wednesday issued its first public direction to Congress to reject the nuclear agreement that was finalized the previous day between Iran, the U.S. and five world powers.

“After more than 20 months of negotiations, the United States and its negotiating partners announced a nuclear agreement with Iran. Throughout the negotiations, AIPAC outlined five critical criteria for a good deal,” read a page on AIPAC’s website. “Unfortunately, the proposed agreement is fundamentally flawed in each of these vital areas. Urge your senators and representative to oppose the agreement.” 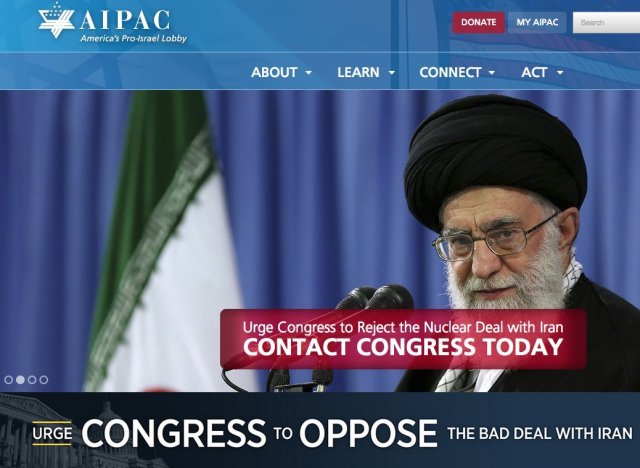 The nuclear agreement reached on Tuesday will dismantle the majority of Iran’s nuclear infrastructure, cap uranium and plutonium production at levels insufficient to fuel a weapon, and force Iran to comply with 24/7 monitoring of its declared nuclear facilities, as well as intrusive inspections of potential undeclared sites. In exchange, Iran will receive billions of dollars' worth of sanctions relief.

Before the agreement can be implemented, Congress has 60 days to review the deal -- and at the end of this period, lawmakers have the option to pass a resolution of disapproval, which would prevent the president from granting Iran relief from sanctions that were imposed by Congress. President Barack Obama has already vowed to veto such a resolution, but lawmakers could override the veto with a 67 percent majority in both the House and the Senate. While several Republicans have vowed to vote against the Iran deal, it is unlikely that enough Democrats would break with a president of their party to create a veto-proof supermajority.

The announcement from AIPAC, the most influential pro-Israel lobby in the U.S., came after over a year of relatively restrained statements from the organization. The group officially supported the ongoing nuclear negotiations between Iran and the six world powers, and urged its members not to talk about the possibility of attacking Iran’s nuclear programs militarily. While it pushed for more sanctions against Iran in the midst of the nuclear negotiations, it also urged lawmakers to back off legislation that would have required Iran to recognize Israel as part of the nuclear agreement, which the Obama administration said would sink the talks.

Just one day before AIPAC urged Congress to vote down the Iran deal, a veteran congressional staffer with over 30 years of experience in the Senate Intelligence and Foreign Relations Committees questioned whether the group would deploy its lobbying efforts to kill the nuclear agreement.

“The AIPAC statement was rather carefully worded,” said Dr. Edward Levine, referring to its initial reaction to the nuclear agreement, which was released Tuesday. “I think that if AIPAC were, in the end, to sit this one out, that would send a strong message that a Democrat who is sort of a known Democrat can vote with the Democrats and get away with it.”

AIPAC has consistently supported diplomatic efforts to ensure that Iran does not develop nuclear weapons, and we appreciate the administration’s efforts and hard work over the course of the negotiations. We also recognize the critical role that Congress will now play in approving or disapproving the proposed agreement.

During these negotiations, we outlined five critical requirements for a good deal. We are deeply concerned based on initial reports that this proposed agreement may not meet these requirements, and thereby would fail to block Iran’s path to a nuclear weapon and would further entrench and empower the leading state sponsor of terror.

As the administration has agreed, now is the time for Congress to carefully review all elements of the proposed agreement to ensure that Iran is verifiably prevented from attaining a nuclear weapon. We intend to examine closely the details of the agreement against that standard, and we will then issue a fuller assessment.

The congressional vote on the Iran deal, expected sometime in September, will be politically tricky for Democrats, some of whom are torn between their faith in the nuclear agreement as the best available option and their concern over the ramifications of casting a vote that is perceived as unsupportive of Israel.

This challenge is further amplified by the fact that politicians in Israel -- in both the conservative Likud party and the liberal Zionist Union party -- have blasted the nuclear agreement as a mistake that greatly endangers Israel’s security. Zionist Union leader Yitzchak Herzog is planning to visit Washington in the near future to express disappointment in the deal and lobby for increased security measures for Israel as compensation.

In a likely effort to counter the pressures from AIPAC and the Israeli government, J Street, a liberal pro-Israel group, has launched a multimillion-dollar campaign to lobby Congress to defend the Iran agreement. “This agreement demonstrates that a core security interest of the United States -- ensuring Iran does not get a nuclear weapon -- can be achieved through diplomacy and without the use of military force,” said J Street President Jeremy Ben-Ami in a statement on Wednesday. “This deal makes the United States, Israel and the entire world safer, and it would be highly irresponsible for Congress to reject it.”