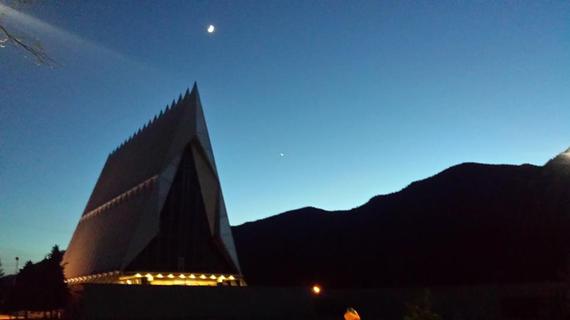 Setting off yet another scandal, the United States Air Force Academy (USAFA) has hired and promoted "ex-gay" cure advocate, Dr. Michael Rosebush, USAFA 1975, as a staff member for the Academy's Center of Character and Leadership Development.

Since its establishment in 1954, the Academy has been plagued with cheating scandals in 1965, 1967,1972, 1984, 2004, 2007 and 2012. In 2003, female cadets claimed they were being sexually harassed and assaulted by upperclassmen. Even after an investigation and the implementation of a sexual assault prevention program, the number of reported sexual assaults increased in 2010 and 2011. The following year, three cadets where charged with rape.

In contrast to these "moral" scandals it has been claims of "religious persecution" at the Academy that has recently been in the public eye. In 2005, a number of cadets alleged that conservative Christian upperclassman and staff used their positions of authority to proselytize their subordinates and students. After an investigation, it was discovered there was official Academy sponsorship of the showing of the Mel Gibson film "The Passion of the Christ." Anti-Semitic slurs went unpunished. In another affront, a banner was found in a locker room stating cadet athletes played for "Team Jesus." In spite of corrective action on the part of the Academy, in 2010, a survey of cadets found that 41% who were not Christian claimed to have been subjected to unwanted proselytizing.

Against this backdrop, the hiring of Dr. Rosebush is inconceivable. Those vetting him at the Academy knew - or should have known - Dr. Rosebush's reparative therapy background in 2009, when it considered him for a position on the Academy staff as an analyst in the Plans and Programs Office. Dr. Rosebush is an Academy graduate and received his PhD in Counseling Psychology from the University of North Carolina in 1989.

His work history is instructive. At the time he was hired by the Academy, his resume showed that he was the President of Coaching Confident. Even if those considering him did not take time to search the Internet to find out that Coaching Confident was his business of reparative therapy by phone, other positions he held should have set off alarms. Certainly, when he listed himself as Vice-President and Professor at Focus on the Family, a conservative anti-gay organization a few miles from the Academy, those vetting him should have been well aware of his philosophy. Dr. Rosebush also claimed to have been the Director of Professional Counselors at Exodus International an ex-gay Christian organization. During his interview and vetting he should have at the very least been asked if he still believed that homosexuality could be cured through the discredited reparative therapy espoused by Exodus. Did he still believe you could "pray away the gay"?

His book, "Sanctifying Coaching", first published in January 20, 2009, claims to provide "groundbreaking methods that helped his clients achieve sexual purity, peace and heterosexual confidence." He also contributed to a publication entitled "Handbook for Therapy of Unwanted Homosexual Attractions: a guide for treatment." In the biography for the handbook he lists himself as clinical member of the National Association for Research and Therapy of Homosexuality (NARTH). Fellow contributors to this handbook include former NARTH member George Rekers who was forced to resign from NARTH when he was notoriously caught with a "rent boy" who he claimed to have hired to merely carry his luggage.

It is hard to imagine that those who hired Dr. Rosebush in 2009 were unaware of his background, education and experience. Did he disclose he was an ex-gay himself? Granted, he was hired when "Don't Ask, Don't Tell" was still the law and it was perfectly acceptable in the military to discriminate against LGBT cadets and airmen. But when the law was repealed in 2010, and open service was finally implemented on September 20, 2011, his continued service at the Academy was circumspect.

It is in this context that Dr. Rosebush was promoted in 2011, from a plans position, with little contact with cadets, to his present position as Operations Research Analyst for the Academy's Center of Character and Leadership Development. While the Academy contends that Dr. Rosebush neither counsels nor works directly with cadets, sources at the Academy report he conducts a yearly character symposium with cadets and oversees all the coaches in the program.

By hiring Dr. Rosebush, and then promoting him, what message does the Academy send not only to cadets but the entire Air Force? An analogy that comes to mind is how employees of color would feel if a corporation hired an avowed and unrepentant white supremacist to be in charge of the company's diversity training program. By his mere presence, the Academy has essentially endorsed his anti-gay teaching and philosophy, creating and fostering a hostile environment for LGB cadets. Leaders at the Academy need to be mindful of the negative impact this situation will have on unit cohesion, moral and discipline. Failing to take some corrective action would also send a message to all other cadets and airmen that there is no need to respect the human dignity of everyone in the military. Inaction is unacceptable at an institution that claims to advance the Air Force core values of " Integrity First, Service Before Self and Excellence in All We Do."