NEW YORK -- The recent disclosure that the U.S. Air Force is blocking access to news websites such as the New York Times and the Guardian, which have posted classified diplomatic cables obtained by WikiLeaks, provoked outrage among media professionals and some national security experts.

But the practice is more widespread than was previously known -- the Air Force routinely blocks news websites that describe classified information, in addition to the 25 websites currently being blocked for containing the WikiLeaks documents. In recent months, some users have been unable to access articles on CNN.com, MSNBC.com and The Huffington Post (after posting in April a video obtained by WikiLeaks of an Army helicopter shooting at civilians in Iraq), according to an Air Force source.

Users who attempted to access news websites, such as this MSNBC.com article, that describe the WikiLeaks documents -- in addition to sites that contain pornography, obscene language, and racist and neo-Nazi content -- have been greeted with an "ACCESS DENIED: Internet Usage is Logged & Monitored" page, saying that "the Wikileaks websites, mirrors, and sites referencing publicized classified information have been blocked" as per an Air Force memorandum issued during the summer.

Here is a screengrab of the page: 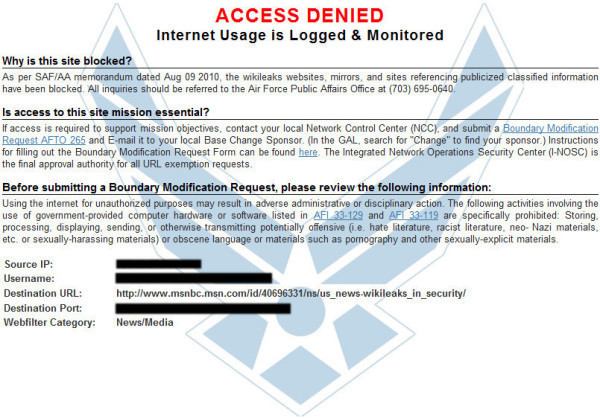 Christine Millette, an Air Force spokesperson, insisted that The Huffington Post has not been blocked, explaining:

"That page can show up if the settings are misconfigured on a particular machine, or even in a particular location. That is why Air Force personnel should speak with their respective Help Desks if they are getting that page on a site that they believe to be an average website with no prohibited content."

Two weeks after WikiLeaks unleashed a trove of classified military records from the war in Afghanistan, the Air Force issued a directive to all service personnel on August 9, warning them not to access the whistleblower site and that doing so could be a way "to harm national security."

In addition, the memo states: "Government information technology capabilities should be used to enable our war fighters, promote information sharing in defense of our homeland, and to maximize efficiencies in operations. It should not be used as a means to harm national security through unauthorized disclosure of our information on publicly accessible websites or chatrooms."

Such blockage of news sites referencing WikiLeaks is unique to the Air Force and is not policy at other services in the U.S. Armed Forces, Major Chad Steffey, a spokesman for the Air Force, tells HuffPost. (Though the Pentagon has similarly-issued guidance against visiting the WikiLeaks site, and the State Department recently barred employees from reading WikiLeaks on their "personal time.") "This is routine -- we monitor and block sites that have prohibited material. Even though [the WikiLeaks documents] have been public, it's still classified material," Steffey said. According to Steffey, The Huffington Post is not currently on the list of 25 blocked sites, adding that access to the Times has been blocked since December 6.

Steffey explains that blocking such sites was prompted by concern that when classified information gets onto the Air Force's unclassified computer system, it costs money to sanitize and clean the computers. "There is a forensic process to clean up the system and that costs $5-7,000 per incident, so we're looking into the prudent use of money," he explains.

"But a block on the New York Times web site is really unheard of. It represents an extreme misunderstanding of information security policy. It reminds me a bit of the Biblical verse: 'If thine eye offend thee, pluck it out.' The Air Force is very religious in that sense."

The blocking of news websites has also been questioned by some defense officials, who claim that the information is already out there on the Internet, reports the Wall Street Journal.

The role of the media in the WikiLeaks scandal was the subject of a House Judiciary Committee hearing on Thursday, at which panelists tussled over whether leaks harm national security.

Gabriel Schoenfeld, a senior fellow at the Hudson Institute, was critical of the government's tendency to overclassify documents, some of which are already in the public domain, but he condemned the Times and other news organizations for posting documents from WikiLeaks. He claimed that journalists and whistleblowers sometimes represent an "assault on democratic self-government" and have numerous financial incentives to "cast aside scruples about injury to national security."

Calling such leaks "WMDs, weapons of mass disclosure," Schoenfeld blamed the Times for revealing a top-secret program to track the funding of al-Qaeda via access to SWIFT, a Belgian financial clearing house, claiming that the disclosure spooked the terrorists, prompting them to move money through more covert means.

"The suppression of information has led to far more loss of life, jeopardization of American security and all the other consequences now being attributed to WikiLeaks and Julian Assange," Nader continued, pointing to the lead up to the Iraq War.

And Thomas Blanton, the director of the National Security Archive at George Washington University, was forthright in declaring the importance of holding a government accountable through exposing more information about its activities -- warning that the mania over WikiLeaks disclosures could lead the government to adopt censorship measures similar to "the Chinese model of state control rather than the First Amendment."

Looking back at previous national security scandals over leaked information, such as the Nixon administration's suing the Times over the Pentagon Papers, Blanton said "the government always overreacts to leaks, and history shows we end up with more damage from the overreaction than from the original leak."

Balton condemned the Air Force, saying he was "astonished" at the blockage of access to sites but he added that he shouldn't be too surprised considering the service's abysmal record on releasing documents under the Freedom of Information Act -- a federal judge ruled that the Air Force "miserably failed" to meet the law's requirements.

He took a shot at the modern news media for focusing more attention on the British jail holding WikiLeaks founder Julian Assange than the substance of the leaked documents. "Celebrity over substance every time."

And Blanton concluded with a warning about the dangers of overclassification, citing Harvard professor Jack Goldsmith, who served President George W. Bush as head of the controversial Office of Legal Counsel at the Justice Department and later said that the Bush administration's secrecy was self-defeating.

Blanton added his own postscript to Goldsmith's analysis:

"We have to recognize that right now, we have low fences around vast prairies of government secrets, when what we need are high fences around small graveyards of the real secrets."