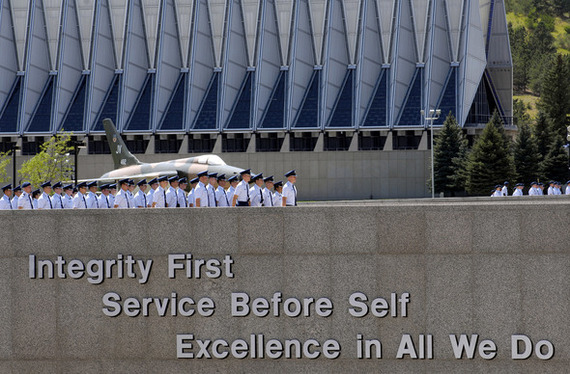 The United States Air Force declares its core values as "Integrity First, Service Before Self, Excellence in All We Do."

The treatment and trial of Air Force 1st Lt. Joshua Seefried is an affront to those values. Assuming an accused is guilty until proven innocent, does not demonstrate "Integrity First." When Generals, the leaders of the Air Force, put their careers before the well being of their Airmen, their conduct is inconsistent with "Service Before Self." Conducting a trial with no credible evidence demonstrates incompetence, not "Excellence in All We Do."

There may be alternate theories regarding why the Convening Authority, Maj. Gen. Darryl W. Burke, against the recommendation of his appointed Article 32 Hearing Officer, continued to pursue the case against Lt. Seefried. Some in the LGBT community have suggested the Seefried case is a 21st century version of the infamous Dreyfus affair. Just before World War I, a French army officer, Alfred Dreyfus was accused of providing secret information to the German Army. He was court-martialed, found guilty, and sentenced to prison on Devil's Island. Many contended he was persecuted only because he was Jewish. The French army at the time was notoriously anti-Semitic. Eventually, he was exonerated and released from prison.

Those who argue Lt. Seefried's case was a persecution, and not a prosecution, point out that he was an outspoken advocate for the rights of LGBT service members. Seefried likely had many enemies both within the military, and in the wider general population, including conservative members of Congress. They speculate that some in the military wanted to make an example of him. Charges of rape and sexual assault against a gay officer, with sordid details made public, would send a message to all LGBT service members.

It would be naïve to assume that the homophobia that existed in the military for many decades would vanish with the repeal of the "Don't Ask, Don't Tell" law. Over 14,000 service members were discharged for being gay in 17 years that law was on the books, and over an estimated 100,000 were discharged when there was an outright gay ban. Cultural change in such a traditional and hierarchical institution does not happen overnight.

On the other hand, military leadership embraced the repeal of the law, and its implementation, with a few exceptions, has been flawless. This would clearly militate against the claim that because he was a gay activist, Seefried was a specific target of the Air Force leadership.

The decision by Gen. Burke to take Siegfried's case to trial was not made in a vacuum. There were several significant events that likely had impact on him as the Convening Authority. First, the number of sexual assaults within the military had increased dramatically to the point of being almost epidemic. Rightfully, this drew the attention of members of Congress, particularly female Senators. Something had to be done to get this intolerable situation under control. One of the most controversial proposals was to take away the duties and responsibilities of the Convening Authority from Commanding Generals, and create a separate system in which experienced and trained Judge Advocates would determine which cases were taken to trial. The Pentagon, and some members of the Senate, opposed such a change, arguing that to do so would remove an important tool used by commanders to maintain good order and discipline. Of course, this debate also placed the actions of Convening Authorities under scrutiny.

The second event was the decision of Air Force Lt. Gen. Craig Franklin to overturn the court-martial conviction of a fellow F-16 pilot, Lt. Col. James Wilkerson. Wilkerson, the inspector general at Aviano Air force Base in Italy, had been accused of sexual assault, abusive sexual contact, and three counts of conduct unbecoming an officer and a gentleman. These charges arose from a party at his home in which he allegedly digitally penetrated a female civilian contractor.

Wilkerson's court-martial, made up of an all male panel of officers, sentenced him to dismissal from the military and a year in prison. Wilkerson requested a commutation of his sentence or clemency from the Convening Authority, Lt. Gen. Franklin. In support of this request, Wilkerson submitted 90 letters praising him as a loyal husband, doting father and professional Air Force officer. Franklin reviewed the entire record of trial, and post-trial submissions, and against the advice of his staff Judge Advocate, overturned the conviction and reinstated Wilkerson. Under the military justice system, the Convening Authority's decision is final. The Service Secretary, the Secretary of Defense, nor any military Court of Appeal can overturn it.

After Gen. Franklin took this action, a later investigation found Wilkerson had fathered a child out of wedlock. This revelation led to public outrage. Franklin retired early, losing a star in the process.

Certainly, General Burke was well aware of the facts of the Wilkerson case. Like his fellow senior officers, he must have been mindful of the negative impact General Franklin's decision had on his career. If Burke had not pursued Seefried's case, would he have come under pressure from members of the Senate who were closely monitoring the actions of Convening Authorities, particularly in cases involving sexual assault? Since the Senate must provide advice and consent to the President for all General Officer promotions, would that action have prevented him from pinning on another star?

Burke's options were two fold. The easy choice was take the case to trial and avoid any second-guessing by the Senate, potential adverse impact on his career or any negative press. Just throw Seefried under the bus, and let the court-martial sort out the accusations of sexual assault. The more difficult decision, one calling for the exercise of prosecutorial discretion, would be to follow the advice of the Article 32 Hearing Officer, and not move forward to prosecute Seefried. If General Burke had made this hard choice, because Seefried was such a public person, it is likely victim rights groups and the press would have taken Burke to task for "letting the accused off the hook."

This "damned if you do, damned if you don't" situation often confronts a Convening Authority when making a decision on whether to prosecute a felony or sexual assault case. Do senior leaders really need this authority to maintain good order and discipline? I submit that they do not, and quite frankly, I suspect many of them would rather not have to carry this burden. The solution to this dilemma can be found in changes to the military justice system made by our closest allies, the British, Canadians and Australians. They have done away with Convening Authorities and now have a professional military judicial system, in which trained Judge Advocates determine which cases go to trial.

What this change would also accomplish is to eliminate the frequent claims of undue command influence made by the accused in the military justice system. Another, even more striking problem this change would remedy is the inability of the military justice system to deal with accusations against the very general officers who often are Convening Authorities themselves. In the 70 years the U.S. Air Force has been a separate service, not one general officer has ever been court-martialed! Those generals accused of offenses that would usually lead to a court martial for enlisted service members and junior officers, are allowed to retire, perhaps pay a fine and face a reduction in rank. What message does that send to their subordinates? Is that consistent with "Service Before Self'?

Cop Seen On Video Grabbing Fellow Officer By Her Throat