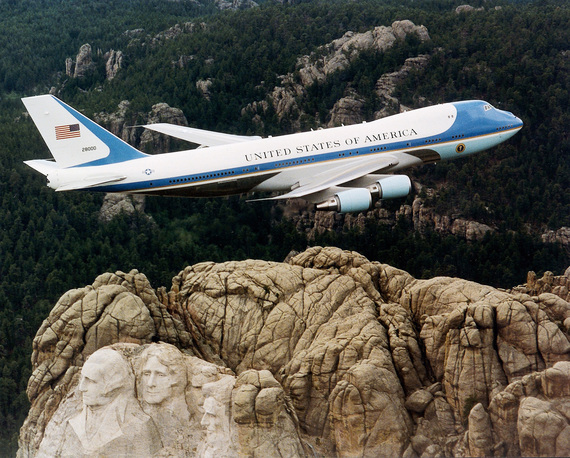 "Boeing is building a brand new 747 Air Force One for future presidents, but costs are out of control, more than $4 billion. Cancel order!"

There will be two new Boeing's 747-8 presidential aircraft.

Boeing is not building the new presidential aircraft at this time.

"We are currently under contract for $170 million to help determine the capabilities of these complex military aircraft that serve the unique requirements of the president of the United States... We look forward to working with the U.S. Air Force on subsequent phases of the program allowing us to deliver the best planes for the president at the best value for the American taxpayer."

Earlier in 2016, Boeing received a $170 million contract to design a replacement for the aging pair of Air Force Ones used by the president. Boeing is not actually building the jet, though logically it is the only U.S. manufacturer with the capability to build such an aircraft.

Cost have actually not been set. The Defense Department's five-year plan indicates a cost of $2.9 billion over the next five years for design and development. It's logical to assume at least another $1 billion in additional expenses to complete and procure the aircraft.

"That [$170 million] is all that the government has spent on the new Air Force One, so far. The Air Force has budgeted, but not spent, roughly $500 million a year between 2017 and 2020 to develop systems for the new presidential transport, acquire two 747-8s from Boeing for around $380 million apiece, and outfit them to military and FAA standards. There could be additional costs after 2020." says David Axe at The Daily Beast


On cancelling the "order"

Any program can be advanced, it can be modified, it can be canceled...These are all within the realm of the possible. But we did the best that we could to create an acquisition strategy around the requirements that were developed by the professionals in the White House who are charged with that.

Nothing has been ordered yet. But the program could be eliminated. This may not be a problem for Trump, but certainly would affect his successors, especially if no order is placed before Boeing stops making 747s. The current aircraft were delivered in 1990, and as we noted, the life cycle is about 30 years. The Pentagon says the current fleet "faces capability gaps, rising maintenance costs, and parts obsolescence as it reaches the end of its planned 30-year life-cycle."

So an estimate of $4 billion -- for design, testing and manufacture of at least two jets -- is not completely out of line. But the budget is subject to approval by Congress and the actual design of the aircraft. Boeing literally needs to re-engineer the plane from the ground up, so there are many one-time expenses.

Air Force One needs to be designed to survive a nuclear war. It requires all sorts of undisclosed security upgrades and countermeasures. It can refuel in flight. The actual cost of the plane will depend on the equipment that goes into it. There also needs to be extensive testing, probably lasting two years, before the plane is deemed ready for presidential travel.

The features, including protecting the aircraft from missile attacks and the ability to communicate with nuclear forces, are not only intended to protect the commander-in-chief but also to allow him or her to run the government for extended periods of time during a national emergency.

Air Force One, although it is a 747 platform, is way, way more than what you would think of as a commercial airliner...It really is, in many ways, a flying White House, in terms of the security. There's [electronic] countermeasures built in, communications, very high level communications, security of all types. After all, this is carrying the president of the United States. It has to go long distances, it has to survive under difficult circumstances, much more difficult than a normal civilian airliner. So it is a bit more complicated than perhaps meets the eye.

Boeing Chief Executive Officer Dave Melcher said, according to the National Defense Magazine that it will be up to members of the transition team who are versed in defense acquisitions to explain to the president-elect the complex requirements of the future Air Force One, and why these airplanes cost far more than commercial passenger planes. Presidential airplanes are nuclear-hardened, outfitted with highly advanced communications technology and come with security features that would be unthinkable for any other airplane.

According to the Stars and Stripes, Loren Thompson, a defense consultant, said, "Air Force One has unique communications, safety and self-protection features so that the president can function under the most trying circumstances - like nuclear war." The price tag, he said, "is driven by the demands of the mission."

While based on an existing design, the price for an Air Force One are massive compared to what a basic 747-8 commercial jet would cost, due to the electronic suites and defensive systems needed on the presidential plane.

Todd Harrison, a budget expert with the Center for Strategic and International Studies, responded: "To be clear, it's $4B for two planes that operate as a flying command post for POTUS in a national emergency, have EMP protection, etc."

Senator Patty Murray, Democrat of Washington, where the aircraft will be built, told POLITICO, "The workers of my state and the workers of Boeing across this country do an incredible job and build and incredible airplane...I hope the president-elect takes the time to talk to the Pentagon and the Air Force and Boeing about how defense contracts work before he tweets."

The Secretary of the Air Force:

Pointing to the fact that the new aircraft, now barely in the research and development phase, "is not scheduled to be ready for another decade, after Trump is already out of office," James says "It will be the president after the next president who actually flies on this Air Force One."

Sen. Claire McCaskill (D-Mo.), a member of the Armed Services Committee, which oversees defense contracts, was perplexed by Trump's claims. "I don't know where he got the number -- he certainly didn't get it from Boeing," she said. "All of it has been contracted -- it is a planning contract -- in order for the Air Force to avoid cost overruns and unreasonable requirements. So I don't know how he tweets a number when no one knows where it comes from."

In a stunning rebuke of the President-elect, a new poll shows that a majority of Americans favor keeping Air Force One and canceling Donald Trump.

According to the poll, ninety-four per cent of Americans believe that Air Force One is qualified to be an airplane, while only twenty-one per cent feel that way about Trump as President.

When told that Air Force One has a mobile command center capable of launching a nuclear attack, a broad majority said that they would feel safer with Air Force One flying around with no one in it for four years than with Trump on board.

Read more about the Boeing 747-8 here