Think you're a real Casanova between the sheets? Prove it. By yourself. On stage. In front of your peers.

The Air Sex World Championships are back, baby, and the competition is stiff.

The Huffington Post went to Drom in New York City on Thursday to expose the sexy -- and often comedic -- event.

Thursday night's show featuring air sex legends with stage names like "Jam Out With Your Clam Out," "Magic Michelle" and "Tootenanny" promised plenty of titillation.

"Air sex will be an Olympic sport one day," the show's founder and MC, Chris Trew, told The Huffington Post. "We're giving these people a platform to [expletive] to glory. They're getting a stab at stardom."

It certainly seemed that way. A packed bar cheered on the solo love makers as they motorboated, thrust and smacked their way to the top. Tootenanny, sporting a tank top and tighty-greenies, was a clear favorite with the audience. He simulated drinking a six pack, having an argument with his significant other and awkwardly tensing up his body in true redneck fashion.

Tootenanny, real name Adam Wilson, wasn't even on the ticket to perform. But he signed up at the last minute, came around from behind and pulled out a win. 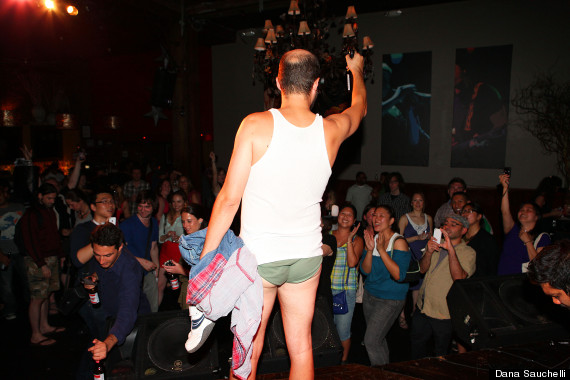 "[My choreography] was the first thing that came to mind," the 32-year-old from Louisiana said. "Somehow parental abuse, incest and beer worked for me."

Judges -- including comedian and New Orleans native Sophie Johnson -- kept the excitement throbbing with criticisms like, "I've always wanted to [expletive] a guy wearing a fanny pack, so you did well."

"Judging is fun for me because, my entire life, I was the daughter of a pair of perverted adults -- it's all funny to me," Johnson said.

She couldn't help but notice New Yorkers' prowess with their imaginary bump and grind.

"People in New York are very fast at everything -- they walk fast, talk fast, and they're always trying to get to the next rung," she said. "But they surprisingly don't [expletive} very fast, do they?"

Wilson, the newest New York champ, will have his chance at international fame when he goes to the regionals in Austin, Texas later this year.

But it's not to late for you to hit the national competition. There are upcoming shows in Boston, Philadelphia, Washington, D.C., Virginia, North Carolina, Georgia, Tennessee and Texas.

So get out there. Show the world what you've been telling your friends you could do for far too long.