Teman decided to parlay the experience into a business opportunity, deftly engineering multiple international media appearances that made his story the number-one trending topic on Facebook and ultimately landed him in talks with major Hollywood studios about a movie or TV series deal. He also managed to persuade Airbnb to reimburse him $23,000 for his losses.

Teman says he stopped by his apartment building in Manhattan's Chelsea neighborhood on Friday, March 14, and saw a group of 20 people standing in the lobby. One of them was the man who was renting his apartment, who was yelling, "We got shut down!" Teman then went into his apartment and found it in a state of extreme disarray, with bottles of alcohol and bags of condoms lying on the floor, and most of his furniture tossed into his backyard. He estimates the cost of the damage at $67,000.

From there, he commenced a calculated campaign to publicize the story. He started with Gawker, BuzzFeed and Gothamist and word quickly spread. The story has now been in 83 print and online publications around the world. Teman also has been a guest on 27 radio shows including Howard Stern and Opie and Anthony, and about a dozen TV shows like Fox's Good Day NY, CBS's The Couch and even news programs in Australia and Israel.

As Teman worked to transform the horrific situation into a media sensation and a potential film deal, two mantras guided him. "I followed two entrepreneurial lessons during this process: If you want to start a business, you have to be prepared for a catastrophe every day and be prepared to turn that catastrophe into an opportunity," he says. "And as an entrepreneur, luck always shows up, but you can't let it pass you by."

Below, check out Teman's advice on how to successfully make your story go viral.

Run Through Your Checklist

Before you dive into an emotional situation and make decisions, Teman says you must be prepared and run through a checklist. The protocol at his company, 12gurus, is to follow a certain checklist before making a decision, which he says is loosely based on Atul Gawande's book The Checklist Manifesto: How to Get Things Right. "Especially if you feel like you have an emotional situation -- whether it's that you come home and your apartment is literally torn apart by an orgy and you're afraid, or you're a pilot and the plane is going down -- you need to pull out your checklist to help remove error rates," he says. Your checklist needs to be your own, but Teman's went along these lines:

1. What do I do? I am a loyal Airbnb customer who is upset and have the ability to share this with the press.

2. What's in it for them? If they respond well, this will end sooner.

3. What do I want from them? Get their top people to pay damages, change locks and ensure safety.

Since humans are emotion-driven, your story needs to tap into the strongest, most motivating emotions. "If we're going into the structure of the brain we're tapping into people's fear -- the primal section, the amygdala," Teman says. "Whenever you're telling a story, you want to hit that first. Then you want to hit the relationship level, or trust. Then you go to higher levels and tell the details of the story."

When you are prioritizing a story, you need to follow Maslow's Hierarchy of Needs, which explains basic human necessities -- safety, food, shelter, trust and others. Teman's story went viral in part because it spoke to the common fear of not feeling safe in your own home (thanks to the host tweeting Teman's address). The second aspect that helped the story spread was the betrayal of trust -- Airbnb sent a verified renter who then threw out and destroyed most of Teman's furniture to make room for a sex party. The story got bigger when Teman estimated $67,000 in damages and found out his landlord wants to evict him.

More from Inc.:
-- 3 Steps to Boosting Your Social Media IQ
-- Great Moments in the Cubicle’s 50-Year History
-- Seth Godin on What Marketers Are Getting Wrong

Pull Out the Red Pen

You must convey your story in a concise manner. "You need to take out the red pen and delete extra words," Teman says. "You need to get to the point faster, but it also prevents you from looking like a rambling loon." If you take a look at his tweets, which he started writing quickly after he arrived at his apartment, you can see how succinct they are. By not flying off the handle or cursing, he maintained his credibility and communicated effectively: Within 24 hours, Airbnb wired him more than $23,000, changed the locks on his apartment and put him up in a hotel, all while a flurry of favorable press was circulating. "This is an influence from comedy. Whether or not you're trying to be funny you need to get to the punchline quickly," he says.

After you run through all these steps, it's time for "the sneeze," Teman says. You need to identify the first three publications that will start "sneezing" your viral content out so that everyone else will catch the virus and spread it some more. "I knew that Airbnb's customer base could be reached through the 'Gawkersphere,'" Teman says. "While this event is bad for Airbnb, it's great for them too. Now people who didn't know about their service found out about it in an interesting way." The company's response made "the growing audience realize how something like a rent-an-orgy is a total anomaly."

He says that reaching out to press is a systematic endeavor: "It's a formula: one guy dancing is a weirdo, two guys dancing is acceptable, and three guys dancing is a group. You're not heading for one story, you're heading for two. Once you have two, it's accepted news and you'll get a third," he says. "Once there are three stories, everyone will pick it up."

Teman said that different publications need different angles, so make sure to tailor your pitch to the publication. The New York Post will run a tabloid story, while the The Wall Street Journal will talk about the financial implications and The Jewish Voice will run a real estate story.

Once the story catches on, Teman says, you need to keep those relationships with the reporters and continue to strengthen the relationship by sending them news, connecting them with sources, or doing anything else that can help them. The next time you have an idea, they will read your email and hopefully publish your story.

How An Entrepreneur Turned An Airbnb 'Sex Party' Into A Viral Hit
Tech&#039;s Biggest Party Boys 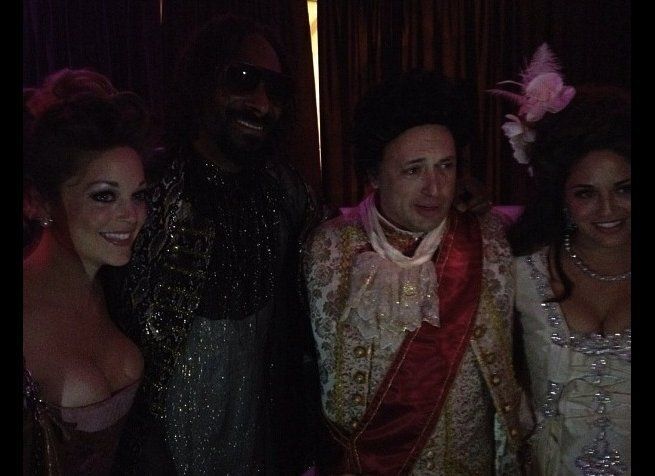