Home-sharing supporters gathered outside San Francisco City Hall Tuesday to protest a proposal they said would nearly outlaw short-term housing rentals in the city offered by websites like Airbnb and VRBO.

The initiative would restrict short-term rentals to neighborhoods with commercial zoning, require permission from landlords or homeowners associations, create insurance requirements and reward tipsters who inform on hosts scoffing the rules.

“Lawmakers have spent a lot of time studying this issue, and there’s room for all of us to work together -- we don’t need to rush to the ballot box,” said Home Sharers of San Francisco member Peter K., a rally organizer who has declined to share his full name with the media until the short-term rental laws are clarified.

“It makes things worse than the status quo, not better,” he continued. “Specifically, it adds layers of red tape and bureaucratic roadblocks for anyone who wants to share their home.” 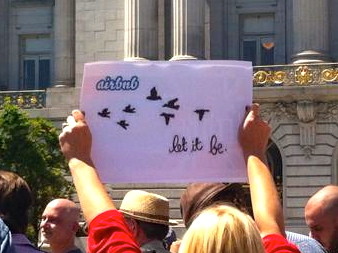 The proposal’s backers said the limits are necessary amid San Francisco’s housing shortage and affordability crisis.

"The short-term rental market is exploding and cries out for some sort of regulation," Welch told the Chronicle. "People are stunned to find out that a house on their block is now a hotel."

Airbnb is open to cooperating with the city on regulating short-term rentals, but said the proposal goes too far.

The company has spoken out against its hosts abusing the platform and applauded San Francisco city attorney Dennis Herrera’s lawsuit filed last week against landlords who allegedly evicted their tenants in order to list on Airbnb and similar sites.

The measure is more restrictive than another initiative introduced earlier this month by San Francisco Board of Supervisors president David Chiu, which aims to end the “hotelization” of apartments by allowing only primary residents who live in their dwellings at least three-quarters of the year to rent housing. Both proposals would require hosts to register with the city.

But some hosts said Chiu’s proposed regulations infringe on their rights as homeowners.

“I pay my taxes,” Marin McElhaney of Lower Pacific Heights told HuffPost at the rally, explaining that she used Airbnb to raise $45,000 to open her own food truck. “I pay a lot to have that home and I should be able to do with it what I want.”