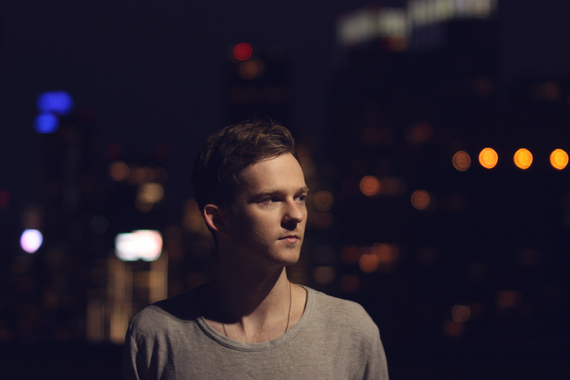 Happy Friday everybody! Aire Atlantica just dropped his latest remix for the K.Flay banger "Blood In The Cut" and you have to listen to it. In an exclusive interview, Atlantica told me a charming story about how he first heard of K.Flay. "It's funny. Before getting to do the remix, I actually saw her live four years ago at my college. She opened for B.o.B. Since that day, I went, 'This girl is awesome!' This remix came about so I'm really stoked about it," Atlantica told me. He elaborated, "It came up through Interscope Records. They heard some of my stuff and they liked it. It was a great remix to make. It felt super natural and I didn't have to really think too hard about it. It's a great original song and it worked out pretty good." When I asked if K.Flay heard of his college story, Atlantica laughed, "I haven't told her yet but I'm hoping to chat with her about it when we link up the next time she comes to New York." The producer was excited to talk more about his love for the city that never sleeps.

"I grew up on Long Island and recently moved to New York City this past summer. It's amazing. The biggest thing that has changed since I moved to the city is that my studio space got dramatically smaller," Atlantica said with a hardy laugh. He continued, "In my old home I had this big room where I could invite people over to work. Now when I write in my apartment it's me sitting on my bed pretty much. So whenever I get back to my old house it's kind of awesome." After getting the jokes out of his system, Atlantica had very nice things to say about Manhattan. "Other than that, I love just walking around the city where there is so much beautiful culture to take in. There's the perfect balance of everything you can imagine," he said. Atlantica then explained how moving to the city helped him grow as an a creative person. He told me, "In terms of how I take that and put it into my music--I feel like there are pieces of inspiration in my sampling. Even if it's just seeing people bang away at the drums on the streets. I've done a fair amount of traveling and NYC is a place I never want to leave. I feel like it's the greatest city in the entire world. It also has the best pizza." When Atlantica finds the time to put his pepperoni slice down, he likes to blend together his electronic and indie hip hop music influences to create a truly unique sound.

"I've been involved in music my entire life," Atlantica said. He continued, "My earliest memory of music is becoming a vinyl obsessed toddler when I was two or three years old. There's home videos of me spinning records not really knowing what they do. My parents put me in front of a turn table and it took off from there. I don't know if that's how I got into the DJ scene but it's my earliest memory of music. From there I started to play the drums. My dad is a drummer as well. I used to sit on his lap. Once I got too old to sit on his lap, I got my own set of drums and I've played drums ever since." Atlantica then explained why he got into music production. "I've made the transition into music production early on in my college years which is about six or seven years ago. I remember listening to Jus†ice, the French electronic music duo. I remember them talking about sampling and how they would take pieces of metal music, disco music and everything else and make their own sound out of it. I realized that is something I wanted to do too." Atlantica is now living the dream and inspiring other talented people to chase their passions as well.

When I asked the talented producer what advice he would give to fellow musicians, Atlantica confidently told me, "Always write what you are passionate about and make sure you don't cut corners with that. If your passion is pop music, if your passion is metal music or if your passion is hip hop music, you should stick to what your passion is and not make music for anybody else." Shaking his head, he continued, "That's where I found my success recently because I finally came to terms with myself and was like, 'This is what I want to write.' The writing process is so much easier when you are writing for yourself. Once people start realizing that and they get attached to you, it's not like you are trying to do anyone favors for writing for anyone else. You're writing what you love to write. That's what makes good music happen. I remember reading about that growing up. Once you really find out what your true comfort zone is you are good."

Aire Atlantica wrapped up the interview by dropping one last tidbit of wisdom. "Stick to your core beliefs and don't jump around. Once you find what you are about, that's the best kind of gift you will ever receive."