Over the last couple of months there seems to be a trend of passengers acting as citizen journalists or their own little group of vigilantes that no one asked for. They seem to be more situationally aware of their surroundings, which is good, but they're focusing their attention, energy and time into the most mundane situations.

I recently read and then watched a news story with a headline that really caught my attention: 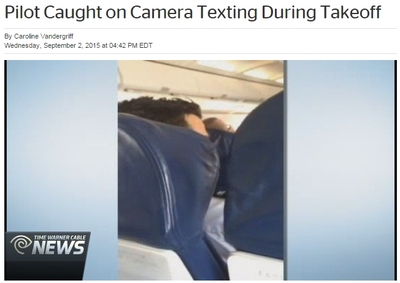 The first thought that ran though my mind was.. "what?! How did someone manage to get a video of a pilot texting while he's speeding down a runway and through those small cockpit windows?" I know cell phone cameras are getting more and more advanced, but seriously? How is this even possible?

It's possible because.. as Time Warner Cable News journalist Caroline Vandergriff explains.. he was a passenger.

Okay.. wait a minute. A pilot is sitting in a passenger seat, not working the flight (obviously), texting during take off roll and this is news? Yes! Why? I don't know. Of course TWC News ran with this exciting, scary, death defying headline that makes everyone read the article.. that's sensationalism and I get that.. but, this isn't news!

The media reported on the story because the passenger who recorded the video of the pilot texting and checking twitter, Chad Tillman, says:

"...he's concerned about what that pilot may be doing in the cockpit behind closed doors if he blatantly disregards the cell phone policy in public view. "

There's a few things I'd like to explain to Chad. First, that pilot isn't working. He's off duty, and probably is headed to or from work. He's a normal, everyday passenger in this scenario. If he had changed into normal clothes, no one would have known he was a pilot and Chad wouldn't be questioning his work ethic by what he does/did in his off time. Yes, the FAA regulation is that you can use your phone during taxi, takeoff and landing so long as it's in airplane mode, but maybe Chad doesn't fly often? Does he seriously think everyone else on that plane had their phone's wireless functions and bluetooth turned off? He said:

...he was worried about the plane's safety when the pilot violated those rules, and he reported the incident to American Airlines.

There's probably 30-40 other people on that plane also texting, tweeting, instagraming, facebooking, emailing, and surfing the web while that plane was speeding down the runway that pilot's one cell phone was the least of that planes worries, issues or problems that day. The flight attendants are on board to "remind and ask for compliance" with FARs and other airline regulations. They're also trained to be situationally aware about what is a true threat to the flight and what isn't. Let them do their job, they don't need your help heretexting.

His last quote brings up another question: why was this reported to American Airlines? What is being reported exactly? That a passenger broke the rules? After the plane took off and while the seat belt sign was still on, did Chad collect the names and photos of the passengers who stood up to get something from the overhead bin and walked to the bathroom? Because, they also pose a safety threat to those around them should the plane encounter turbulence. So my question to Chad here is: Did you walk through the plane and video everyone else was breaking rules as well and report them to their employers? Gosh, their employers should know about this! Who knows what kind of work ethic they have if they're breaking rules on an airplane! They're probably stealing money from the cash register or taking office supplies home, they should be stopped! Also, Chad, do you follow every rule and policy, all the time, 100%? Just asking.

The pilot in question was off duty, not working. The passengers lives were not in his hands. Chad reporting this to American Airlines was a cheap shot at trying to get someone fired for no reason. And, how could American actually fire him, anyway? He wasn't working! He wasn't on duty, sure, he did violate the FAA regulation and they MAY, after seeing the video, fine him -- but that's all that comes of it. Unless you see someone charging the flight deck, doing something suspicious, attacking a flight attendant or another passenger.. do us all a favor and mind your own business.

This is just one of a many different situations over the past few weeks which passengers blew out of proportion or reported "news" that really wasn't. There was a social media surge of a photo that depicted a flight attendant on the jumpseat with a phone in her hand. People were outraged that she was texting while taxiing. But did you know that airlines are now issuing flight attendants tablets and hand held devices? They're becoming a part of their everyday life. American Airlines' even tells the flight attendants what seats are open, what passengers names are, they can change seats, swipe credit cards for food orders, and do a multitude of other tasks. A passenger snapped that photo in outrage that this flight attendant was putting everyone at risk, but did they even stop to think that she could be working? Or that the device she was using was actually company issued? No. What's with the sudden interest in catching airline crewmembers breaking the rules? 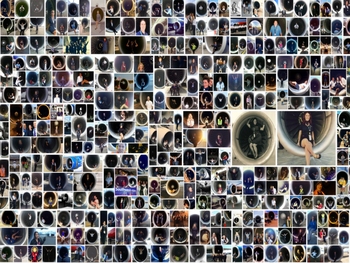 Let's not forget the uproar over Erika at Spirit Airlines taking a photo in the engine. The nation was upset after ABC7's report that she could have punctured or damaged the engine putting people's lives at risk, I got the chance to chime in with my two cents after I began a social media campaign to prove this was normal, just look at all of the photos that were sent to me! But did you ever wonder how she got down there? Who hoisted her into it? Who took the photo? These are professionals who know what they're doing and know what will and won't cause damage and risk. And, as we've proven, there are literally THOUSANDS of airplane engine photos out there and not one plane suffered an issue because of them.

Some airlines take even the stupidest passenger complaint seriously and it causes a long, tired and sometimes ridiculous investigation into that person's whole career and work ethic. They could even be suspended without pay while a complaint is being looked into. Other airlines take these types of complaints and toss them the trash, laugh at them and issue the "we're looking into it statement." You never know how an airline actually treats their employees even if they look all pretty and happy-go-lucky on the outside -- trust me, I know about that first hand.

But how would you feel if someone reported you for something they thought broke the rules at your job and caused you to be scrutinized and suspended pending the investigation.. yet you did nothing wrong? How does that affect the level of work and service you provide? You can't have it both ways. You can't demand better service in the skies because it's "declining" but then report an employee for doing their job or for what they did while they were off duty.

Mind your own business.

What do you think? Are passengers and social media taking unworthy "news" stories too far or should this stuff be reported?