While you, the customers, had your knees pinned against the seat in front of you and were forced to swallow record baggage and booking fees last year, the U.S. airline industry saw profits soar to the very cushiest of highs.

The Department of Transportation reported Monday that 25 U.S. airline companies combined in 2015 for after-tax earnings of $25.6 billion -- a more than threefold increase over the $7.5 billion in profits one year earlier.

Last year's profits, largely driven by a huge drop in the price of jet fuel without much change in what you pay for flying, is the most since at least 1976, when Congress deregulated the airline industry, according to USA Today. The earnings are enough to purchase more than 70 Boeing 747 airliners.

It was the sixth straight year of industry profits, according to the Bureau of Transportation Statistics. But the good times have come after years of red ink: The industry lost $27.2 billion in 2005 and $23.7 billion in 2008.

In 2015, total operating revenues dropped slightly to $168.9 billion, from $169.3 billion in 2014, the department said. At $126.9 billion, airline fares accounted for nearly three-fourths of all revenue. Baggage and reservation change fees accounted for $3.8 billion and $3 billion, respectively.

Overshadowing the industry's slight decline in revenues, however, was dramatically lower fuel costs, to $27 billion in 2015 from $43.4 billion the previous year.

Despite their savings, the airlines charged only slightly lower ticket prices during 2015. In the fourth quarter of 2015, the average domestic airline flight dropped to $363 -- the least since 2010, according to the Transportation Department. The airlines' jet fuel windfall has been slow to trickle down the aisle, however, and with new fees, passengers likely aren't paying less.

Melanie Hinton, a spokeswoman for industry trade group Airlines for America, told USA Today that U.S. airlines are "putting every dollar to work for customers, employees and investors."

"Everybody keeps telling us that we’re seeing all these improvements, but nobody’s seeing them," Charles Leocha, a founder of Travelers United, told the newspaper. “New airplanes don’t help us when the planes are bigger with more seats on board and they’re squeezing more people into them."

Last month, the Senate voted down a measure aimed at preventing airlines from further reducing the amount of legroom. At the time, as Politico reported, Sen. Charles Schumer (D-N.Y.) spoke in defense of his amendment, saying, "The great Abraham Lincoln was asked how long a man’s legs should be, and he famously answered, ‘Long enough to reach from the body to the ground.’ If you asked a major airline today how long should a man’s legs be, they’d say, ‘Short enough to miss the tray table.’ That’s not a way to fly.”

But hey, at least the airlines have been kind enough to bring back complimentary cookies and pretzels. Enjoy! 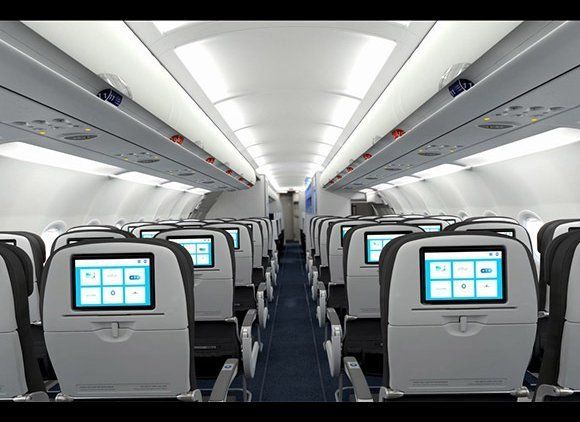