P.R. brouhahas regarding our airlines are now legend. First, most of them instituted a fee on domestic flights if we checked more than one bag and then, having gotten away with that, doubled the ante in only a few months by charging for the first bag as well. Soon after, US Airways made us cough up two dollars for soft drinks (that's without alcohol, folks), although most of the airlines didn't have the guts to go along. 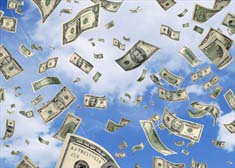 But it didn't stop there. US Airways and others started charging for blankets and pillows. Movies, which had become free if you owned a headset, now cost several dollars when the airline offers a selection instead of the standard fare. I was told "This is what the passengers prefer" by one flight attendant, though she didn't elaborate if the preference for a greater selection would have prevailed if the passengers were forewarned there would be a cost.

And that isn't the end. Free flights based on mileage which are so hard to get unless booked many, many months in advance, now cost twenty per cent more on Delta if you travel to Europe. Until last fall, it was 50,000 miles for such a trip and it now requires 60,000. United, too, has bumped up the mileage from 50,000 to 55,000. Plus, one of the added benefits of an award trip -- flexibility in changing your flight dates without charge if you don't modify your itinerary -- has disappeared and it now costs $75 to $100 to do so on some airlines if you notify them within twenty days of travel. Delta charges $100 even if you give them six months notice. American Airlines doesn't charge such a fee and I hope this piece doesn't give them any ideas.

The main benefit remaining in award issued international trips is that you are still entitled to a free stopover, meaning you can fly to London and stop in New York on the way over or on the way back for the same mileage cost. And for the moment all international travel (paid or award) still includes a free meal and two pieces of luggage up to fifty pounds apiece. However, many of you may recall that not too long ago there were no luggage weight requirements traveling within or to and from the United States.

The air carriers have attributed these changes to dwindling profits, in particular due to the spiraling costs of fuel. To be fair, when free domestic baggage ended last spring gas was well over three dollars a gallon and by mid-summer it was close to five dollars. But guess what? Something happened and the price of gas started to plummet. In my case, the high of $4.59 per gallon last July fell to $1.79 on January 1.

But did the airlines reciprocate? No, they started charging special rates for certain parts of their coach cabin. Some are talking about higher costs for aisle or window seats, presumably leaving the most economical rate for the poor sucker stuck in the middle. Pity the tall or portly guy or woman, who will either suffer or pay through the nose. Not to mention the guy or woman who paid more to sit on the aisle when they're pushed way into the aisle by very large bargain seeking passengers fighting for room on the armrest.

Why haven't these horrendous so-called cost conscious changes been rescinded as the gas prices have come down? Or better yet, as I suggested in a column last year just charge a few dollars more to return service to what it was before and no one would really notice the boost. Most people know fares go up and down like the stock market, and the person sitting next to you rarely pays the same fare.

The increase in revenue would pay for the meals we've been denied for years on long domestic flights -- except for Continental, which for some strange reason still serves them. It would also cause US Airways to stop the ridiculous charge for soft drinks. Oh, wait, on Tuesday I overheard a flight attendant telling a passenger on one of my flights back from Florida that the soft drink policy was ending in a few days, but they were still ordered to collect the charge until then.

Memo to US Airways CEO Doug Parker: Have you cut back on P.R. as well as pillows, luggage, meals and drinks? If you're going to suspend a much-hated policy, one that the flight attendants themselves condemn even as they are forced to put forth the evil plan, why not get rid of it when you announced it? Yes, you might wring a few more dollars by waiting the four days, but at what eventual cost when such an expedient decision reveals the level of idiocy and greed of your executive team?

Flying used to be classy. Remember the scene in Catch Me if You Can when Leo DiCaprio had all those glamorous stewardesses on his arms? 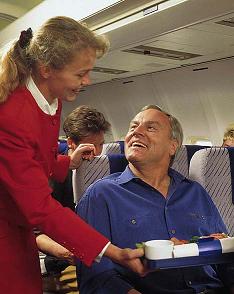 Look around you the next time you fly, and with the dearth of service you'll see it's more like riding a Greyhound bus. And it's not the flight attendants' fault. Plus, the pilots are mostly great, witness US Airways' own Captain Sully. But Doug Parker can't take credit for the heroic US Airways crew, who all did their jobs incredibly as the jet miraculously landed safely in the Hudson. No, for Parker and the other overpaid airline corporate geniuses it would be more correct to impute the increased denigration of air travel in our nation.