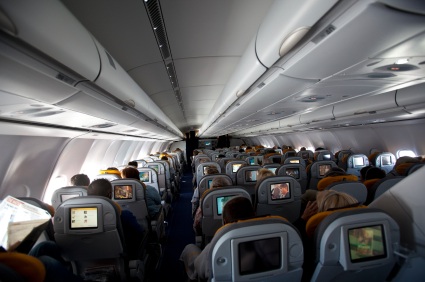 Answer: When the Apple geniuses wrote their marketing copy for the newest iPad ("Instant On" and "Everything effortlessly springs to life"), I don't think they anticipated the manners faux pas you're reporting. Like texting while driving, just because technology allows you to do something doesn't mean you should. Sometimes simple, low-tech manners should prevail, and this is definitely one of those times.

Let's be clear: porn is "at-home" entertainment and should never be shared with strangers on a plane. Ironically, the European low-cost carrier Ryanair recently announced the launch of a new in-flight app that would allow passengers to watch pornography at 30,000 feet (for an additional fee, of course). When pressed by reporters, Ryanair CEO Michael O'Leary responded, "Hotels around the world have it, so why wouldn't we?" While the smart money says Ryanair's triple-X app will never see the light of day, Kate Hanni, executive director of the consumer advocacy group FlyersRights.org, says, "Flight attendants get these kinds of requests all the time."

So let me say this to any others who are contemplating loading up their tablets with X-rated fare: public spaces demand consideration for the comfort of others and are not for, er, private activities.

In your case I would have urged you to do one or both of the following:

By the way, there's a reason why folks used to cover their racy material in brown paper covers; they wanted to spare themselves embarrassment and spare their neighbors unwanted smut.

And if you're ever the one who simply can't wait to deplane before boning up on your X-rated videos, then please have the courtesy to bring your own computer, plug in the ear buds, and use one of the many privacy screen protectors on the market that make it impossible to see your screen from a side angle. However, do not consider this advice as condoning the indefensible.

(By comparison, becoming a member of the "mile-high club" now seems almost quaint -- at least such activity usually takes place in the privacy of the aircraft restroom!)

This column originally was published on Advocate.com.

Steven Petrow is the author of Steven Petrow's Complete Gay & Lesbian Manners and can be found online at gaymanners.com. Got a question? Email him at ask@gaymanners.com, or contact him on Facebook and Twitter.

An author and journalist often referred to as Mr. Manners.