Traveling may soon get a little bit easier for breastfeeding moms in the U.S. as an initiative to bring lactation rooms to airports across the country is taking hold on the legislative, corporate and grassroots level.

This month, U.S. Rep. Tammy Duckworth (D-Ill.) introduced the Friendly Airports for Mothers (FAM) Act, a bill with bipartisan support that would require commercial airports to provide private lactation rooms for breastfeeding mothers in every terminal.

"Finding a clean and private space to breastfeed or pump breast milk in an airport can be burdensome and stressful, if not impossible,” Duckworth wrote in an op-ed for the Chicago Sun Times. “It’s not uncommon for moms to be directed to a bathroom. We would never ask our fellow travelers to eat their meals in bathrooms stalls, yet we ask new mothers to feed their children while sitting on a toilet seat." 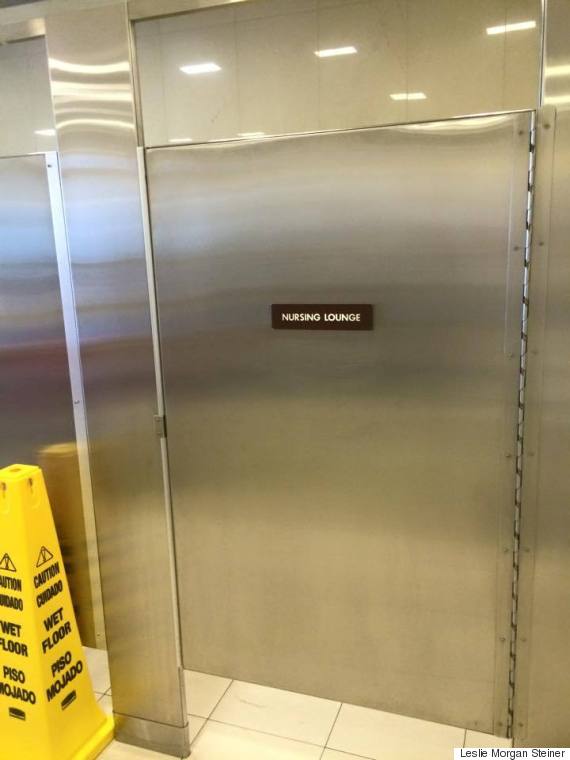 Parents were outraged when officials at Ronald Reagan Washington National Airport in Washington, D.C. put a "nursing lounge" sign on the handicapped stall in a Terminal C women's restroom.

In an interview with The Huffington Post, leading lactation consultant and La Leche League representative Diana West said that bathrooms "are exceptionally unhygienic places to pump." She stressed that "having a clean private room with electrical access is very important."

As mom to a 6-month-old baby girl, Duckworth explained in her op-ed that she’s experienced the challenge of finding a place to pump in transit firsthand. “No matter what they’re doing or where they are, breastfeeding mothers need to express milk every few hours. Missing even one needed pumping session can have several undesirable consequences, including discomfort, leaking, inflammation and infection, decreased milk supply, and ultimately, breastfeeding cessation." 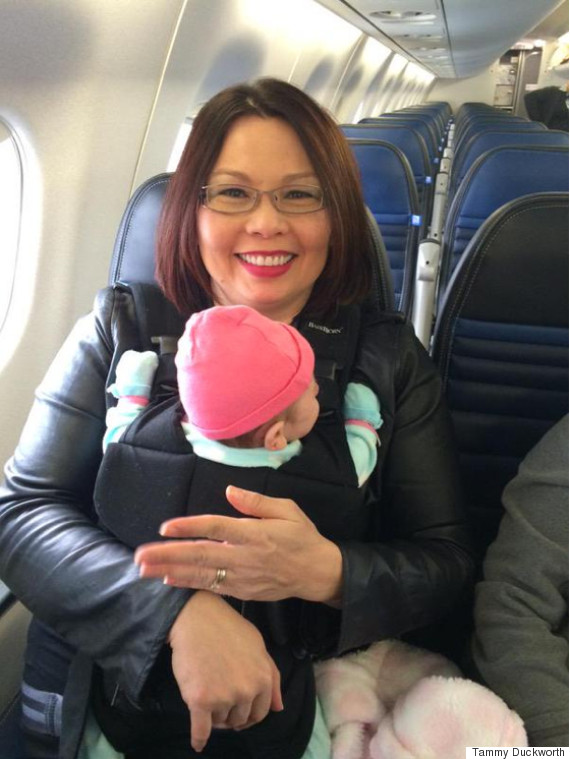 U.S. Rep. Tammy Duckworth on a plane with her daughter Abigail

Duckworth's bill -- one that would have an effect at the national level -- comes at a time when politicians and citizens are working to make these mandates at the local level. Last year, California passed a law requiring airports to provide lactation rooms with chairs, electric outlets and, in the case of newly constructed terminals, sinks for mothers to wash their breast pumps. A similar bill passed both houses of the Illinois legislature earlier this month.

While women have the right to breastfeed in public in the U.S., this legislation would give nursing moms the option for a safe, clean and enclosed space if they wish to nurse or pump privately. In a November 2014 survey of 100 U.S. airports, 62 reported that they were "breastfeeding-friendly," yet only eight of them had private lactation rooms that met the minimum standards. Furthermore, two of these eight airports' lactation rooms were placed outside terminal security checkpoints.

These barriers to breastfeeding moms in transit are what inspired Sascha Mayer and Christine Dodson to launch Mamava -- a design business that manufactures comfortable lactation pods with cushioned bench seats, power outlets and fold down tables. 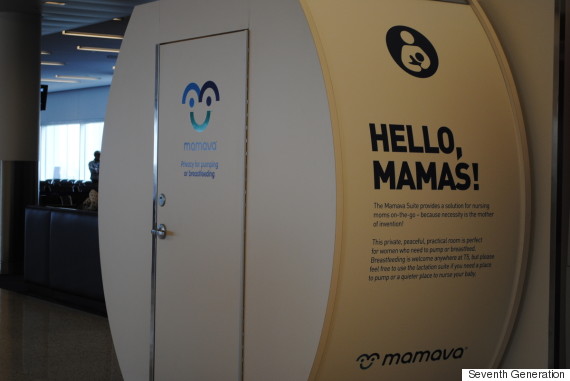 "Travel is stressful whether traveling with breast pump or with baby, and lactation spaces can help make life easier," Mayer told The Huffington Post. "These rooms not only support travelers, but also airport and airline staff in meeting their breastfeeding goals, contributing to a healthier, happier society."

Mayer and Dodson launched Mamava as new moms nine years ago, working on it periodically until 2010, when the passing of the Affordable Care Act drove them to devote themselves fully to the business.

Today, there are Mamava pods in Burlington International Airport, General Mitchell Airport in Milwaukee, and most recently, in the New York metro area airports -- LaGuardia, JFK and Newark. You can also find the units in colleges, civic centers, arenas, stadiums, convention centers, hospitals, private offices, fulfillment centers, and even a mall.

The Mamava founders are currently working on deals to bring the pods to other airports around the U.S. -- though in some cities like Philadelphia, airports are implementing satisfactory lactation rooms on their own.

"I think there is a huge gap in understanding the logistics of breastfeeding and pumping. Many times we have had to explain to facilities managers -- who are often male -- that a woman just can’t leave her breastfed baby without pumping. It’s not like turning on and off a spout," Mayer said. "Once people understand, they truly want to help solve the problem and improve the travelers experience. 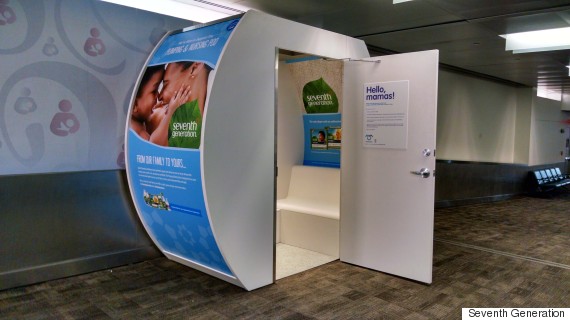 Despite this increasing willingness to help, the U.S. is not a global leader when it comes to accommodating breastfeeding mothers. "I would definitely say that the U.S. is far behind other countries in the number of available clean private places to pump in their airports," West said.

Sascha Mayer pointed out that countries like Japan are farther ahead in the sphere of lactation spaces, noting that this is consistent with other policies in those areas. "The U.S. is lagging behind in maternity leave," she said. "Japan and many European countries have less of a need for this sort of amenity because women get much longer leave and don’t go back to work as soon, necessitating the breast pump, etc."

Nevertheless, there will always be situations when nursing mothers need to travel, and providing the means to pump in transit is one important step that can help parents. Mayer and Dodson sum up the potentially powerful effect of these efforts in their Mamava mission statement: "A healthier society due to a changed cultural perception of pumping/nursing that affords every woman the opportunity to nurse her child regardless of her circumstances."

Here's to the end of nursing in sad, unsanitary bathroom stalls and the start of a era of smooth air travel for breastfeeding moms.

Keep scrolling for some more photos of the exterior and interior of the Mamava nursing pod.