What lies beneath the layers of famous paintings? Apparently...more paintings.

Researchers recently discovered such a conundrum at the Louvre Museum in Paris. They used a TSA-style scanner to unveil a mysterious image hidden under the brushstrokes of the famous mural ”Trois Hommes Armés de Lances."

In fact, the scanner -- just like those used in airport security for full-body scans -- looked beneath the surface of the mural without causing damage. What was found? A Roman man's face.

"We were amazed, and we were delighted," lead researcher Dr. J. Bianca Jackson, who is now a postdoctoral researcher at University of Rochester, said in a written statement. "We could not believe our eyes as the image materialized on the screen ... With a little extra manipulation with contrast and color, the facial features came through like a miracle." 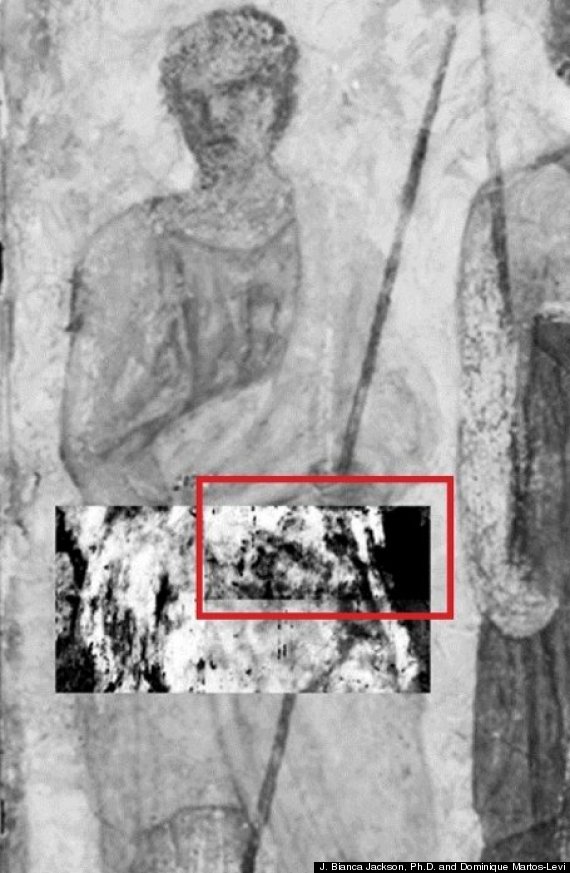 Terahertz rays unveil for the first time a hidden image (red box) of a man’s face under the surface of a famous fresco, or mural, in Paris’ Louvre Museum.

Jackson and her team actually attempted several other techniques to "see" beneath the layers of the mural: X-ray radiography, x-ray fluorescence imaging, infrared photography, infrared reflectometry and UV florescence. They came up with nothing.

"We measured about ten different sections and there was a lot of data to process," Jackson told The Huffington Post. "We weren't seeing anything for the first seven or eight sections, so we were resigning ourselves to having the same results as the x-ray and infrared images."

But what was the trick to glimpsing beneath the painting without causing damage? Terahertz radiation, a non-ionizing, low energy, and non-destructive imaging technique. The research team used beams of electromagnetic radiation, able to penetrate optically opaque materials, to detect reflected wavelengths that were distinctively different from the surface of the painting.

The process is slow -- it takes hours to analyze a section the size of a sheet of paper -- but little by little, the image of a man's face and part of his tunic appeared on the screen. No word yet, however, on who this mystery man really was.

The piece itself is of 19th Century art collector Giampietro Campana, who was known for "reworking" his works (and the Campana collection has a scandalous history of recycled paintings). But the finding is likely part of an ancient Roman fresco, and is believed to be thousands of years old.

"This particular experiment was exciting for us because it was the first hidden painting we've imaged that was figurative, instead of a decorative or geometric design," Jackson said.

The finding was presented this week at the 245th national meeting of the American Chemical Society.