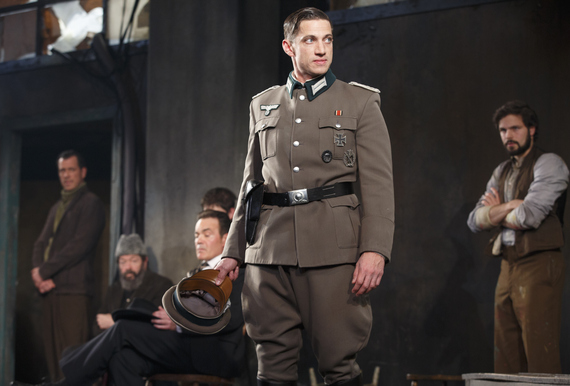 Arthur Miller--who would have turned 100 on October 17--has had a great week in New York, with a riveting production of A View from the Bridge (at the Lyceum) and an admirably effective production of Incident at Vichy (as the Signature). "Admirably effective" isn't quite so hats-in-the-air as "riveting," but then Vichy isn't nearly the play that View is.

Miller, like his contemporary Tennessee Williams, had an early rush of success followed by decades and decades of plays that went unappreciated. Death of a Salesman (1949) is, clearly, at the top of Miller's list. Four other plays can be considered fully successful--All My Sons (1947), The Crucible (1953), A View from the Bridge (1955) and The Price (1968). After the Fall and Vichy sit near the top of the next bracket. Both came in 1964, as marquee attractions at the short-lived Lincoln Center Repertory Company; they also marked a return for the playwright, who had been absent from the theatre since A View from the Bridge. (This coincided, not incidentally, with the Marilyn years. The playwright left his wife and married Monroe in 1956, divorcing in 1961 while they struggled through the filming of the Miller-scripted "The Misfits." Monroe died the following year, at which point Miller seems finally have returned to his typewriter.)

After the Fall, of course, was a fictionalized version of the Miller/Monroe relationship. Vichy is closer in purpose to The Crucible, except that in the earlier case the playwright made his point using a 17th century setting; the incidents in Vichy took place within the memory of the original audience. Ten men are corralled in a rundown anteroom, anxiously waiting to find out why they've been pulled off the street. (Michael Wilson's production begins with what seems like a full minute of forebodingly anguished silence.) The time is 1942; the place is the French town of Vichy, which--while the Nazis were occupying Paris--was the capital of the supposedly "free zone" of France. Free, but under the direction of the invaders. The men--doctor, painter, laborer, actor, etc.--slowly realize that they have been rounded up because they are Jewish. The audience, both today and in 1964, know full well precisely what is happening.

Put a group of characters in a waiting room and wait until they are picked off, one by one, and things inevitably turn formulaic--even when Arthur Miller is doing the writing. Every character has his weakness, which must be exposed before he's trotted off to interrogation. The order of the interrogations is clearly stacked; subsidiary characters go first, while the ones with the most to say get to stay until the last minutes of the ninety-minute play. The offstage interrogations themselves are of varying lengths, timed--it almost seems--to allow room for the actors to make big speeches.

Part of the reason for the play's spotty production history--A View from the Bridge and Death of a Salesman have been revived on Broadway four times, The Crucible five (with a new production, from current View director Ivo van Hove, coming in April)--is presumably the need for a large cast. Here we have an impressive production with seventeen actors under the direction of Wilson, whose numerous credits include a sterling job for the Signature on Horton Foote's The Orphans' Home Cycle.

The showiest roles--and, seemingly, Miller's most important characters--are Leduc (Darren Pettie, of Butley), a French doctor and former military man; Von Berg (Richard Thomas), an Austrian prince repelled by his country's embrace of Hitler; and the Major (James Carpinello, of Saturday Night Fever), an injured German soldier who is unwillingly assigned to participate in the interrogations. (These roles were created, in Harold Clurman's original production, by Joseph Wiseman, David Wayne and Hal Holbrook.) 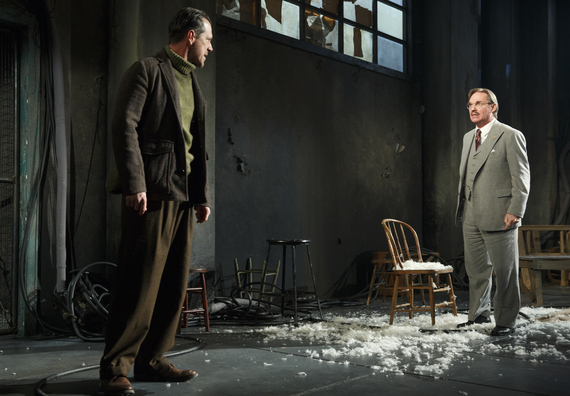 Darren Pettie and Richard Thomas in Incident at Vichy.
Photo: Joan Marcus
Thomas, who has over the years turned into an excellent actor, pretty much carries the evening. (He sees fit in his program bio, at this point in his career, to altogether omit his iconic role of John-Boy in "The Waltons.") The other two are not quite so strong; especially puzzling is the final section of the play, when Pettie--as Miller's man of reason, and apparently the playwright's philosophical stand-in--suggests that his character is nervous by jittering around the stage. Standing out among the rest are Jonny Orsini (of The Nance) as the painter Lebeau; and especially Jonathan Hadary (Gypsy), in the mostly silent role of the Old Jew.

Miller being Miller, the quality of the writing keeps things interesting; the play becomes totally engrossing, in the final fifteen minutes, when Leduc gets to the play's central philosophical argument: "Each man has his Jew; it is the other, and the Jews have their Jews." He goes on to define the Jew as "the man whose death leaves you relieved that you are not him."

The play is well worth visiting, especially under the Signature Ticket Initiative which makes tickets available for the initially scheduled run for $25. But there's a great production of what now seems to be a great Miller play, over on 45th Street, that is more or less unmissable. Not the case with this production of Incident at Vichy, which even so is recommended as an opportunity to catch a sturdy production of one of Miller's mid-level plays.

Arthur Miller's Incident at Vichy opened November 15, 2015 and continues through December 20 at the Signature Center

Arts The Crucible Michael Wilson Arthur Miller After The Fall