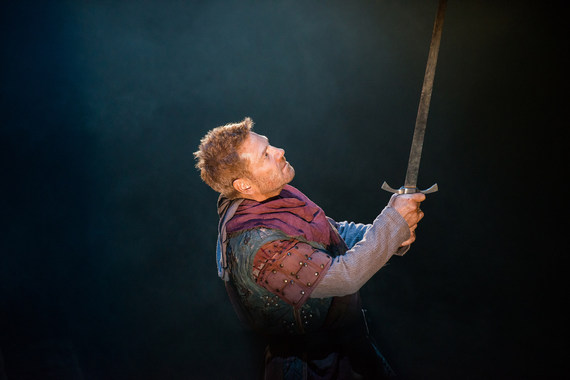 New York has seen recent Macbeths by the handful, including two star-topped Broadway productions in the last year, but they are best forgotten. Now we have Kenneth Branagh's Macbeth--starring Branagh and Alex Kingston as his lady, directed by Branagh and Rob Ashford--and it is monumental.

The play begins even before the play begins. Upon arrival at the Park Avenue Armory, ticketholders are separated into twelve Scottish clans (signified by colored wristbands and clan-specific program inserts). This is not, happily, prefatory to some sort of Scottish audience participation; rather, it is a method of crowd-control which allows them to fill the oddly-configured hall in an effective manner.

An alarum bell within summons each clan to step through the sturdy Drill Hall entrance doors and pass along a path of paving-stones through a dark, dank and windblown Scottish heath--the ground is peat and puddles, you can feel the damp--and approach an arch formed by what I guess you could call a stone henge of massive boulders. This leads to the inner auditorium, an enormous rectangle with side stages (backed by boulders) at each end. There is a dirt-filled trench cutting through the space, eighty feet long by sixteen feet wide. Bench seating is on either side, rising from ground level into the darkness about twenty rows up. 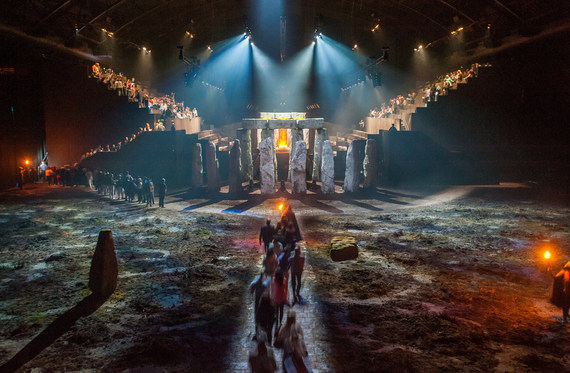 The play begins with those weird witches, of course, in this case suspended in niches of the stone henge like kernels in a hot-air corn popper. Then comes the battle, offstage in the text but very much on stage here. A score of soldiers traverse the dirt-filled trench, which the witches' "thunder, lightning and rain" quickly turn into a muddy morass upon which most of the play is staged. Yes, people in the front row get splashed, and some get muddied; swordsmen crash against the walls like hockey players being slammed into the boards. (At the preview I attended, Branagh--preparing to charge into the fray--seemed to vehemently spit into the crowd.)

This is pretty clearly a different Macbeth. It is indeed played to the crowd; given the long, two-sided configuration, there are about sixty front-row seats. That puts some three hundred patrons in the first five rows, close enough to see the sweat and smell the mud. There is also some body-checking when the lusty hero returns from the field and "takes" his lady, more or less in the lap of the patron in A 14. (The hall has been filled with 1,090 seats; how the action plays from above I cannot say, although I suspect the immediacy dissipates in the upper reaches.)

What we get is a fast-paced Macbeth of two hours duration. The text has been cut, yes; but Ashford and Branagh keep the show in constant movement, with the staging spread along the length of the trench. No time wasted on scene changes, here. Along with the co-directors, the third hero of the evening--and an integral contributor to its enthralling effectiveness--is set designer Christopher Oram, a Tony-winner for Red. (He is also responsible for the 150 or so costumes, finely detailed from the close seats--and built to withstand all that fighting, and all that mud.) There are several breathtaking stage images, including Lady Macbeth sleep-walking on the boulders, twenty feet up; a blazing wall of fire; and the altogether stunning vision of Great Birnam wood approaching high Dunsinane across the Armory's distant, boggy heath.

The cinematic sweep of this Macbeth is not altogether unexpected; Branagh, since appearing in the Royal Shakespeare Company production of Henry V in 1984, has engaged in no less than six filmed Shakespeares. Somewhat surprisingly, this marks his New York acting debut. He makes a powerful and rugged Macbeth, especially from the up-close rows at the Armory. He is well matched by the voracious Ms. Kingston (an RSC veteran, familiar from television's ER and Doctor Who.) The rest of the imported company of twenty-eight is fine, albeit with few standouts other than the Banquo of Jimmy Yuill and the Duncan of John Shrapnel. There is also a presumably-American ensemble of thirty for crowds, battles, and sentry duty on the heath. 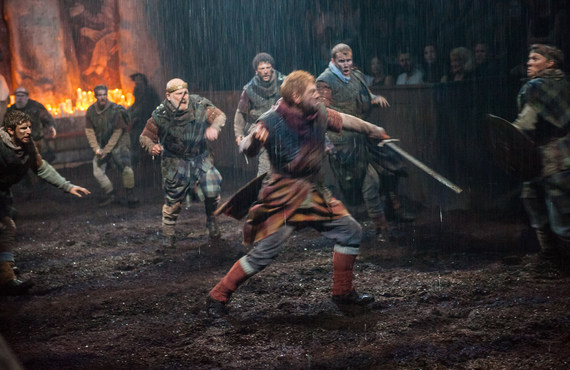 This Macbeth--which premiered last summer in a 280-seat derelict church in Manchester, England--is a joint production of the Park Avenue Armory and the Manchester International Festival. The two groups share an artistic director, Alex Poots, who founded the MIF in 2007. The play--which appears to be the hottest ticket in town just now--is a major coup for the Armory, originally built for the Seventh New York Militia Regiment in 1880 and in the midst of an ongoing renovation. Macbeth is in for a three-week run of twenty-one performances, through June 22. Catch it if you can, although tickets are scarce.

A note for less durable patrons: Macbeth runs about two non-intermissionless hours, with seating on backless benches (with reasonably comfortable cushions, in the lower rows at least). While the preliminary entrance of the separate clans enhances the experience, it does add to the duration of your time on the bench. The helpful house staff is understanding, so it is possible to delay your personal entrance until closer to the actual curtain time.

Macbeth, by William Shakespeare and directed by Rob Ashford and Kenneth Branagh, opened June 5, 2014 at the Park Avenue Armory