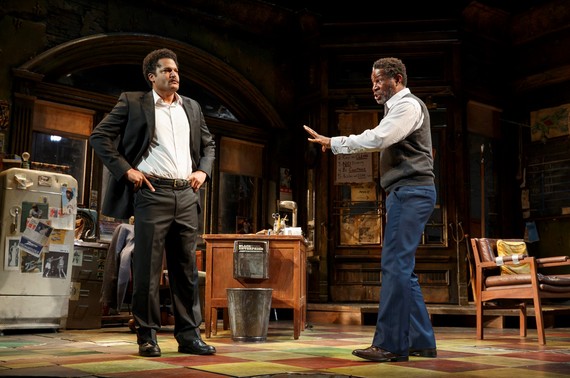 The voice of August Wilson is heard in the land once more with the arrival of the Manhattan Theatre Club's production of Jitney. (At the same time, Denzel Washington's excellent motion picture version of Fences can be seen--literally--across the land.) Given that Jitney is now making its first appearance on Broadway, and that director Ruben Santiago-Hudson has filled his cast with grand performers giving grand performances, theatergoers can head to the Samuel Friedman prepared to be entranced and entertained.

The company is headed by John Douglas Thompson, who established himself as one of our finest stage actors with twin 2009 off-Broadway performances in Othello and The Emperor Jones. Thompson is altogether commanding as the owner of the jitney station. He is matched by Brandon J. Dirden, who made such a strong impression as Boy Willie in Santiago-Hudson's 2009 revival of Wilson's The Piano Lesson at Signature Theater (and more recently played Martin Luther King, Jr. to Bryan Cranston's LBJ in All the Way). In the hands of Thompson and Dirden, the final scene of the first act absolutely crackles. Dirden does similar work at the play's end, bringing down the final curtain.

Adding to the all-round acting lesson at the Friedman is Wilson veterans Anthony Chisholm and Keith Randolph Smith; Michael Potts, who introduced us to the quaint phrase "Hasa Diga Eebowai" in The Book of Mormon; and André Holland as the young driver just back from Vietnam. Since his Tony Award-winning performance in the 1996 Seven Guitars, Santiago-Hudson has become one of the surest practitioners of Wilson's art. Perhaps due in part to his acting life, Santiago-Hudson helps his cast--each and every one--bring out the richness in the characters. He also stages the show, on David Gallo's steeped-in-decay set, with musical interludes including what almost seem like a staged overture and entr'acte. The highly-effective blues score is by Bill Sims Jr. 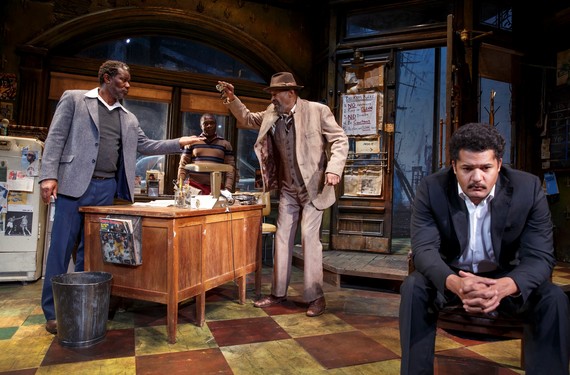 Despite its posthumous premiere on Broadway, Jitney is in theory the first play in the late playwright's ten-part American Century Cycle. It was first produced in Pittsburgh in 1982, apparently before Wilson came up with the idea of ten plays dealing with the African-American experience over the course of the 20th century. The next play, Ma Rainey Sings the Blues, brought Wilson to Broadway in 1984; this was followed by Fences (in 1987), which won the playwright the first of his two Pulitzers and assured Broadway runs of his subsequent work. In 1996, he returned to Jitney for another Pittsburgh production; the revised version was produced off-Broadway at Second Stage in 2000. Thus, you had 'early Wilson'--written before he learned all that he learned by the time he wrote Fences--in a fixed-up version by the (by then) accomplished playwright.

This accounts, in part, for what we have at Manhattan Theatre Club. An excellent production of an intriguing play, overflowing with that incomparable language of the master. But the script itself, as rich as it is in performance, is not quite an American classic and not quite up to the other nine plays. Jitney is built in fits and starts, operating not unlike some of the not-quite-up-to-inspection automobiles at the Pittsburgh car service that serves as the play's base.

There are multiple scenes and exchanges that turn episodic, unlike in a well-tuned and well-written play. One of the finest and most interesting exchanges, in fact--a scene between the youngest of the jitney drivers (Holland) and his not-quite wife (Carra Hamilton)--suggests that it is strong enough to serve as the base for a different play. We are intrigued, but the wife is relatively subsidiary to main story and the main characters. One suspects that Jitney would be a very different play if the mature Wilson had first plotted and written it after Fences, The Piano Lesson et al. 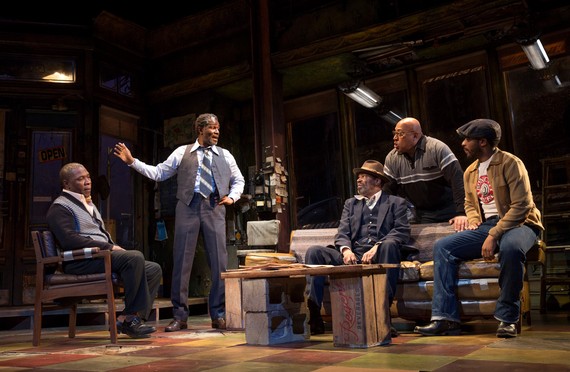 In that, Jitney is not unlike Stephen Sondheim's early Saturday Night, written in 1954 but not completed until the composer revised it in 1999. Both are clearly the work of the master in question, perhaps instantly recognizable, and unquestionably rewarding. Neither, though, fit in with the collected masterworks of the author. That said, the cast and the production make this Jitney a must-see for those who appreciate the voice of August Wilson.
.
August Wilson's Jitney opened January 19, 2017 and runs through March 12 at Manhattan Theatre Club's Samuel Friedman Theatre