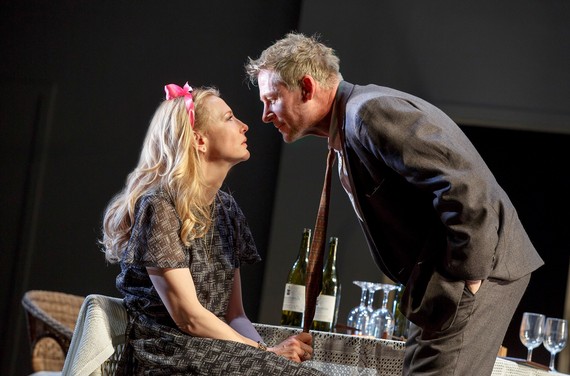 There are explosives mixed in with the evening's fireworks, Cate Blanchett tells us midway through the first half of Andrew Upton's The Present at the Barrymore. Said fireworks indeed explode with a bang, but they are less explosive than the astounding Ms. Blanchett in her Broadway debut.

This free adaptation of an early and not-quite-finished student play by Chekhov is a homegrown effort from the Sydney Theatre Company, an indication of the sort of fiery work Upton and Blanchett (who have been married since 1997) did during their recently-ended term as co-artistic directors. Three of Upton's other STC adaptations--Hedda Gabler, Uncle Vanya and Genet's The Maids--have made brief New York visits, thanks to Blanchett's star-power. Her presence in The Present makes it an instant event on Broadway; but the play and production are more than worthy, thank you very much. What's more, the excellence of the entire acting company of thirteen makes it abundantly clear why the U.S. producers went to the expense of importing them from Australia.

Mikhail Platonov (Richard Roxburgh) is a somewhat worn and tattered woman-magnet; they are all after him over the course of Anna Petrovna's (Blanchett) fortieth birthday fete. During the evening, he cuckolds his two loyalest friends, and not entirely to anyone's surprise. Mikhail can't help it; even as he tries to drink himself into a stupor, all the vodka he swills can't stop the wives he is seducing from seducing him. 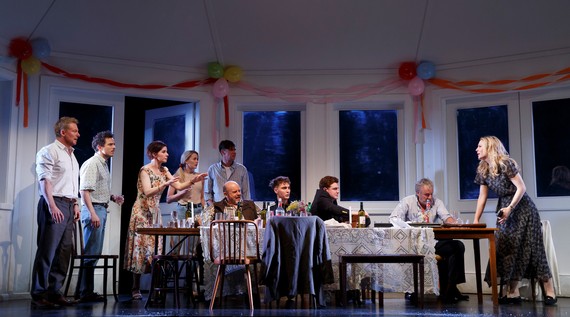 Chekhov (1860-04) never saw his first play produced, and it was lost until mysteriously appearing in 1923. (The Soviets apparently "rescued" it from the locked safe deposit box of Chekhov's surviving sister.) The material has been adapted into numerous versions in numerous languages, including two successful English adaptations. Platonov, adapted by Dmitri Makaroff, was presented at the Royal Court in 1960 starring the post-My Fair Lady Rex Harrison and his own fair lady at the time, Rachel Roberts. And in 1984, the accomplished Michael Frayn (of Noises Off) worked the material into Wild Honey, which starred Ian McKellan as Platonov. The latter was highly successful at the National Theatre in London, but very much a fizzle on Broadway in 1986 at what is now the August Wilson Theatre. David Hare also did an adaptation in 2001, which was revived last year at the National.

Memories of the U.S. production of Wild Honey provide an instant observation. McKellen was supreme in the Frayn play, with the four women slipping in and out of the central spotlight. In Upton's hands, though, Anna shares (or perhaps even commands) full attention. While Platonov is the prize, Anna seems to be directing the amours; in her hands, these are liaisons far more dangereuses than the ones in the recent revival of the Christopher Hampton play at the Booth.

This works capitally well in Upton's adaptation, which he has transplanted to the era of the oligarchs in the mid '90s. Blanchett's Anna takes the honors of the evening, with Roxburgh a close second. (In Wild Honey--at least, in the U.S. production--Anna was so secondary that I can't even tell you who played the role, although the Internet reveals it was Kathryn Walker. The only performance I recall, other than that of the star, was Kate Burton as McKellen's wife Sasha.)

Let us say, straight out, that Blanchett--with her two Oscars--makes it instantly clear that she is a creature of the stage. She is in full control, even when she is seemingly sitting silently. Her face, when she smiles, lights up like a beacon; when merely thinking or observing the others, she can be lethal. (There is a scene--just before she springs into action--during which she quietly and unobtrusively removes her bra. As unobtrusively as you can, with 1,100 sets of eyes glued to your every breath.) 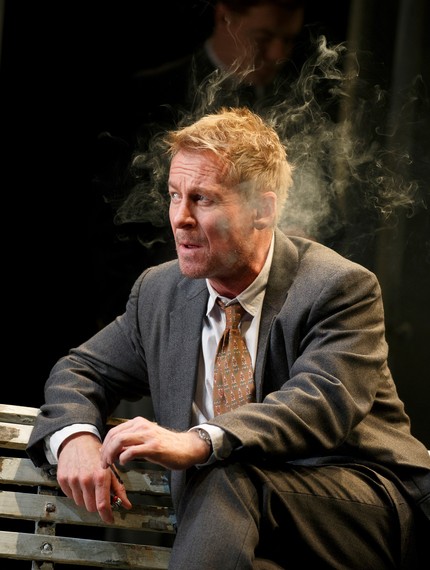 Australian film and stage star Roxburgh is perfectly marvelous as the Lothario gone to seed. The others are all fine, especially Jacqueline McKenzie (as one of Mikhail's former lovers) and Anna Bamford (as a new one). Toby Schmitz and Chris Ryan add to the fun as the ineffective young husbands. Director John Crowley (who visited Broadway with The Pillowman and A Behanding in Spokane) keeps the play moving rapidly through its almost three-hour running time. Your attention is unlikely to lag, not with Blanchett, Roxburgh and this group.

The "present" in question--which teeters between the notion of Anna's birthday present, and characters whose present is uncompromisingly tied to the boundaries of their relationship twenty years earlier--turns out to be a grand present for those in search of theatrical lightning.
.
The Present opened January 8, 2017 and runs through March 19 at the Ethel Barrymore Theatre