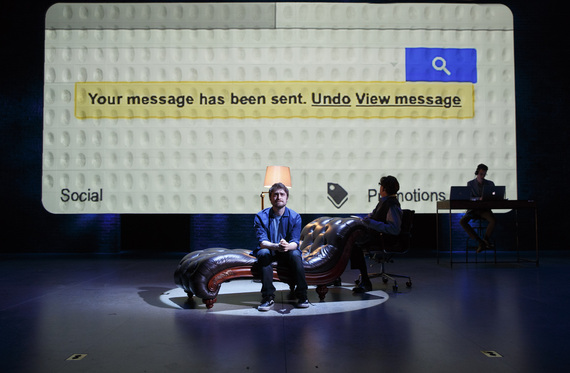 The creators of Privacy kindly request that the audience keeps the surprises in the show secret, which places the intrepid reviewer walking a fine line. There are some obvious secrets here, yes; but the entire method of the new play at the Public could be considered a secret. Intrepid reviewers don't necessarily heed by such instructions, especially when the whole thing doesn't merit much attention. In the case of Privacy, though, springing the secrets will impede the playgoer's appreciation of what turns out to be an intriguing and enjoyable delight of an evening. So walk the line we will.

It is no secret, to begin with, that the cast includes--billed among the others in alphabetical order--one Daniel Radcliffe. Which explains in part why Privacy sold out way in advance, long before the first performance. (This seems to be happening frequently nowadays at the Public, and not solely because of star casting.) The show originated in 2014 at the Donmar Warehouse in London, without Mr. Radcliffe, where it was a hit.

That former Potter lad plays a Brit playwright referred to simply as The Writer. (In one of the many digital images flashed on the backdrop, we see The Writer's identity card--in which the name seems to be listed as Graham James or Graham, James. Hard to read, as it quickly flashes by; but this suggests that the playwright character is a variation of James Graham, the author of Privacy.) The poor fellow sits on a psychiatrist's couch, bemoaning the end of his latest romance. He self-consciously refers to the lover in question with the pronoun "they" instead of "he" or "she." It turns out that the departed partner was indeed a man--no secret here--although in the course of the play we only see The Writer dating women. 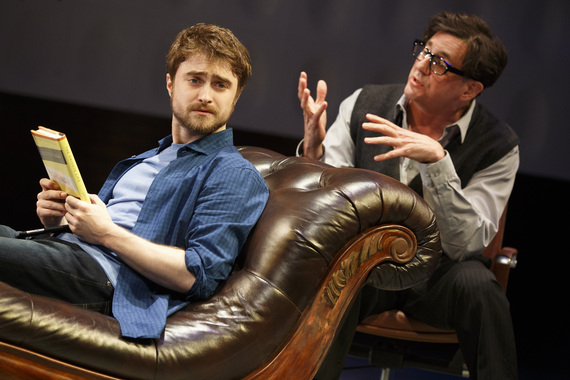 The protagonist's solution to his dilemma is to move to New York, where he can get lost in the crowd; invisible in the big city, he thinks. Nobody in today's world of social media and high tech surveillance is invisible, though; not even people who purposely try to avoid social media and surveillance. And that's the point that playwright Graham and director/Donmar artistic director Josie Rourke are making. (The pair share credit for creating the play.)

Speaking of secrecy, it's no spoiler that Edward Snowden plays a part in the play, via video recording; there was a big story in the paper about that, so we can mention it. Snowden is one of two-dozen real life folk represented in the play (professors, politicians, directors of the F.B.I. et al). All, otherwise, are portrayed by members of the six-person cast. Plus one researcher (Harry Davies) who sits at the back of the stage through almost the entire play, looking like a nerd disc-jockey.

That cast is very much up to the demands of the evening. Standing out--needless to say--is Radcliffe. The poor lad has faced a bit of a bumpy reception on the New York stage thus far, in revivals of Equus, How to Succeed and The Cripple of Inishmaan. Unfairly so; I found Radcliffe perfectly fine in the first two lukewarm productions, and even better in the third. In Privacy, he gives a very nice performance as the muddled bloke; he also handles the numerous communications with audience members with charm. The others, in their multiple roles, all add bright spots. Standing out are Rachel Dratch (extremely droll as journalist James Bamford) and Reg Rogers (as a delectably hard-boiled investigator). 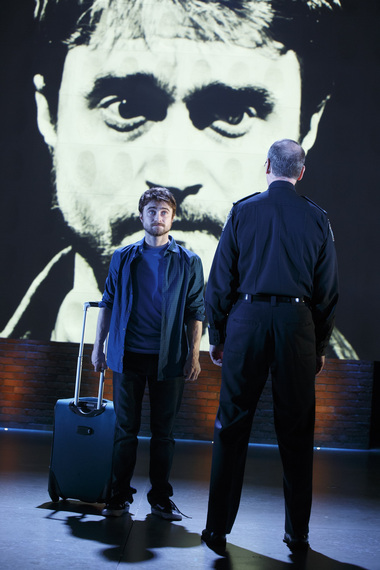 It is no secret that Privacy deals with social media and the Internet; nor is it a surprise that the management respectfully requests that you turn your cellphones on for the performance. The nature of just how they use your cellphones lies on the secret side of the line, so I won't spill. Let us say simply that while the plot tells how The Writer's privacy is an illusion (thanks to just about every app he ever downloaded), Graham and Rourke are more concerned with the privacy of their audience members. And they make a mighty convincing argument of it.
.
The Public Theater/Donmar Warehouse production of James Graham's Privacy opened July 18, 2016 and continues through August 14 at the Public Theater