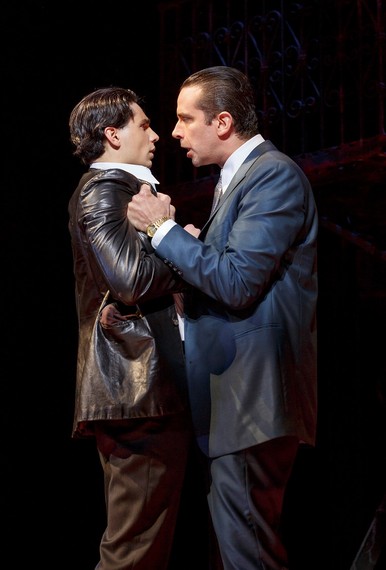 The ingratiating, low-brow, mob-infused charms of Chazz Palminteri's one-man play A Bronx Tale, which translated so well into Robert De Niro's expanded, big-screen version of the same title, remain in evidence in the new musical version at the Longacre. Said charms, unfortunately, are interrupted by song after song after song: some doo-wop, some Motown, some jazz-infused and some standard musical comedy. Too many of the songs are inconsequential, which serves to dilute those ingratiating, low-brow, mob-infused charms which won audiences over in the first (and second) place.

This is, indeed, a tale oft-told. Palminteri starred in his semi-autobiographical play off-Broadway in the fall of 1989; the film version opened 1993. The star then brought the play back to New York, for a Broadway run in 2007 at the Walter Kerr; a key addition to the project was director Jerry Zaks, who was presumably responsible for fine tuning the play into first-rate entertainment. With the addition of composer Alan Menken (of Little Shop of Horrors, Beauty and the Beast et al) and lyricist Glenn Slater (of The Little Mermaid and School of Rock)--and with directing chores jointly credited to De Niro and Zaks, in that order--the musicalized Bronx Tale appeared at the Paper Mill Playhouse in New Jersey this past February. The Broadway edition retains choreographer Serge Trujillo (of Jersey Boys, and quite obviously so), the design and music teams, and the three adult principals.

If the plan was to transform the one-man play into a musical blockbuster along the lines of Jersey Boys, West Side Story, Guys and Dolls and Smokey Joe's Cafe--well, that's precisely what they seem to have attempted. (A Zaks-directed revival of the latter was announced last year for this fall; it was presumably forestalled when the Paper Mill Bronx Tale received a "money notice" from the paper-of-record.) Instead of modeling it after one of these crowdpleasers, though, A Bronx Tale freely borrows from them all. The Jersey Boys-like sections work fairly well, and get the show off to an entertaining (if familiar) start. A closely copied version of the Guys and Dolls crap game--without a song of the caliber of "Luck Be a Lady"--does not come across nearly so well.

The second act turns into West Side in spades; we have our own mini-rumble, and a full-cast "we're gonna rock 'em tonight" number is written and staged as if it's Jets v. Sharks all over again. The starcrossed boy wanders the violent streets like Tony searching for Maria, and at one point--when the hero is asked by his gang if he's "in" on the rumble--you almost expect him to say "womb to tomb, sperm to worm." 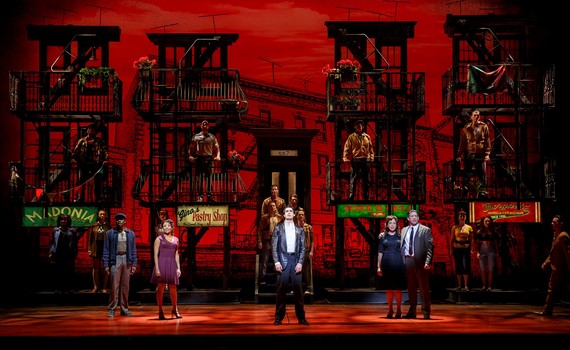 A Bronx Tale is unlikely to work without a strong performance in the central role of the gangster Sonny. (Palminteri played all the roles in the one-man show; he was Sonny in the film version.) Fortunately, Nick Cordero carries the musical with aplomb. This is the actor who appeared out of nowhere in 2014 and practically nabbed a Tony in the Woody Allen-Susan Stroman Bullets on Broadway, as the bodyguard Cheech. (Not incidentally, this role was created in Allen's 1994 film version by: Chazz Palminteri.) Last season Cordero appeared as the villain-of-a-husband in Waitress, a role with which he could not do much. In Bronx Tale, Cordero is smooth as glass with a jagged edge, with charm to spare.

The role of the teenaged Calogero (as in Calogero Lorenzo Palminteri)--who also serves as narrator--is played by newcomer Bobby Conte Thornton, who does perfectly well with his ever-present chores (although he is not surprisingly overshadowed by Cordero). Hudson Loverro--the child actor playing the nine-year-old "Young Calogero"--is extraordinarily winning; he brightens the show with his acting, singing and dance moves to such an extent that thirty minutes in, when Loverro trots off to his dressing room until curtain calls, there is a distinct letdown.

Richard H. Blake is earnest as the boy's upright father Lorenzo, who years earlier took a job as a bus driver instead of joining the mob and is given songs showing how decent he is. (Watching him with young Loverro, at least some viewers will flash back to Prince of Central Park, the lamest musical of 1989, in which the fourteen-year-old Blake had altogether impossible material to play and over-the-title star billing.) Lucia Giannetta plays Calogero's mother, with slender material except one of those generic housewife-coming-to-terms-with-her-child-who-no-longer-needs-her songs; and Ariana DeBose is especially winning as Jane, the girl from the wrong side of 187th Street. (Be advised that A Bronx Tale is full of racial epithets. There is also a musical paean to "Nicky Machiavelli.") 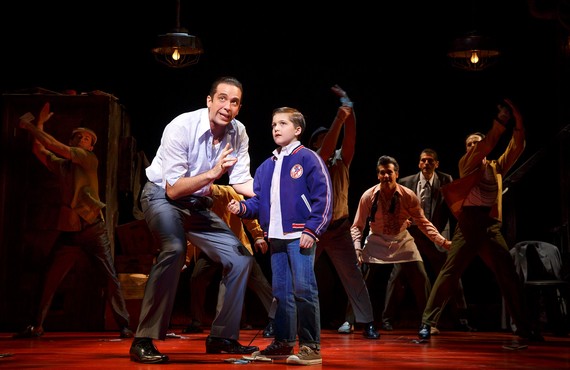 Due to the rather awkward adaptation from play to libretto (sample song cue: one actor says to another, "Listen"), A Bronx Tale plays like a standard jukebox musical, only without tuneful songs coming out of said jukebox. A Bronx Tale gets a passing grade, and might well prove a crowdpleaser; but Jersey Boys, it's not.
.
A Bronx Tale opened December 1, 2016 at the Longacre Theatre