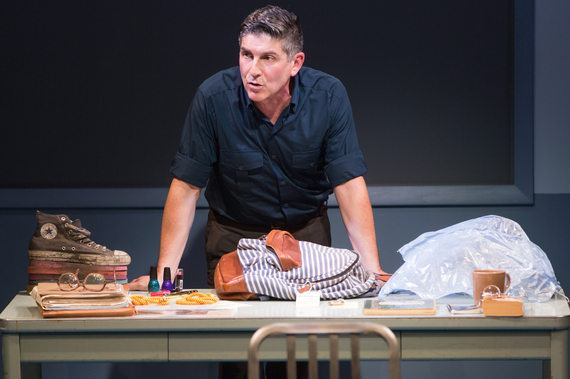 James Lecesne in The Absolute Brightness of Leonard Pelkey.
Photo: Matthew Murphy
The Absolute Brightness of Leonard Pelkey, a one-man show at the Westside Theatre written and performed by James Lecesne, chronicles the short life of a New Jersey orphan. The unseen title character ends up murdered at fourteen; his rainbow-colored platform sneakers, self-assembled by glueing a half-dozen flip flops to the bottom of his Converse Hi Tops, lead to the discovery of his body in a lake.

Lecesne tells the story in the person of Chuck DeSantis, a Bard-quoting gumshoe in "some godforsaken precinct down the Jersey Shore." As Chuck runs through the case for us ten years later, Lecesne doesn't recount the testimony; he riffles through nine "Joisey"-accented characters in lightning-fast impersonations. The performance by the likable author is a tour-de-force, especially in his portrayal of the women in the tale.

Lecesne is very much in earnest; while his play is loaded with hearty laughs and outright bellylaughs, his aim is serious. He was the author of the Oscar-winning 1994 short film, "Trevor." He included that character in his 1995 off-Broadway monologue, Word of Mouth, which was presented at the Promenade under the impressive auspices of Nichols and May. In 1998, he was cofounder of the Trevor Project, which helps combat suicide by gay teens; now, Lecesne addresses gay bashing. The play, which originated at Dixon Place on the Lower East Side in February, is based on his 2008 novel for young adults, titled simply "Absolute Brightness."

The production--which includes incidental music by Duncan Sheik--seems likely to be a crowdpleaser; it is well done, and Lecesne clearly knows what he is about. And yet, this viewer found himself somewhat outside the circle of brightness (or, rather, absolute brightness). The play is admirable, the performance is entertaining; but I always did feel like I was watching a performance rather than engrossed in a story. Lecesne's characters are like assorted gems, but in some ways the words they say and the way they act seem specifically contrived for actorly purpose. Many of the characters feel over-extended; they have plenty to say and relish their time in the spotlight, but they are serving themselves rather than acting as building blocks to help describe poor Leonard's radiance.

Consider Lily Tomlin's The Search for Signs of Intelligent Life in the Universe or Jonathan Tolins' Buyer and Cellar; two excellent solo shows that are very different from each other, and from Absolute Brightness, but performed in the same manner. Tomlin (in the former) and Michael Urie (in the latter) gave us the same variety of characters that we get from Lecesne; in each case, there is one main storyteller who slips into supporting characterizations as desired. But the central characters in Search and Cellar had a direct connection with the audience; the detective Chuck, in Absolute Brightness, is just one of the versatile Lecesne's characters. What's missing, here, is heart--and Leonard Pelkey himself.

That's surely the author's design; the play is built on the notion that nobody really knew, or cared about, the boy until after he disappeared. But without an actual sense of Leonard--other than that he was overly flamboyant for small-town Jersey, in his platform sneakers, heavy eye makeup and Capri pants--there isn't much to care about at the play's center, only a shuffling Columbo-type.

My guess is that audiences will mostly embrace The Absolute Brightness of Leonard Pelkey, and that the above-discussed flaw is merely in the eyes of this beholder. Sitting at the Westside, I wanted to love the play but found myself merely admiring it.

.
The Absolute Brightness of Leonard Pelkey opened July 23, 2015 and continues through October 4, at the Westside Theatre/Downstairs