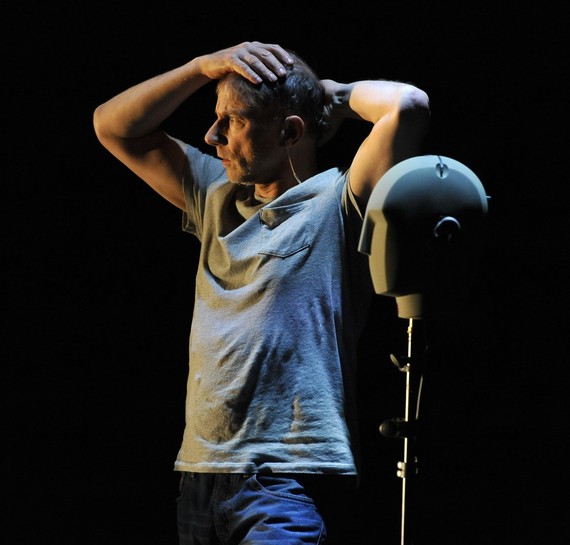 A picture, it's said, is worth a thousand words. But how many words for a non-visual, aural picture? That notion, which rarely comes up, is astoundingly illustrated in Simon McBurney's new play, The Encounter.

The stage of the Golden Theatre is set up to resemble something like a recording studio, the main scenic element being an upstage wall of soundproofing material. There is a work table and chair downstage to one side; scattered microphones; what looks like a dark gray mannequin head, atop a tall mic stand; and bottled water by the shrink-wrapped case. Not much to look at; rather, a stage picture that is decidedly not worth a thousand words.

The most prominent and unusual element of the design, as you take your seat, is not even on stage. It is resting over the backs of each seat in the auditorium: a pair of headphones, for everyone. (Neither cheap, economy airline headphones nor luxury models; somewhere in the moderate range, with the suggestion of being wiped down with disinfectant between performances.)

Several technicians mill about before the start, troubleshooting any inoperable headphones. One of these folks--a slight and non-descript fellow of middling appearance--comes center to instruct us about just what we are supposed to do. This turns out to be Mr. McBurney, the author, director and sole cast-member of The Encounter. (Richard Katz plays the role at Wednesday matinees.) McBurney is also the originating producer, being the cofounder and artistic director of Complicite, which despite the French name is a British theatre company, established in 1983. While McBurney frequents stage and screen as a performer, he is best known hereabouts as director of Complicite's savagely inventive production of Ionesco's The Chairs, which visited this same Golden Theatre in the spring of 1998.

He takes a photo of the audience with his smartphone, to send to his six-year-old back in England he says. Not really, given the time difference. He muses on how family stories and family histories are built on family photos, which are not reality. He makes a joke about the United Kingdom, and another about the reality of Brexit. Once the audience is fully seated and fully primed, he helpfully makes sure we have the headphones correctly aligned, right ear and left ear. He starts to traverse the stage, illustrating how his voice "travels" from one of our ears to the other, then around the back of our head.

He moves to another microphone, which he explains is tricked up to sound deeper, lower, and more American; he will use this voice for the protagonist of the play. (The Cambridge born-and-educated McBurney is the son of an American archaeologist.) As he talks on, his earlier voices continue and more sounds come in. With our eyes closed at his behest, we hear a mosquito buzzing just behind our right ear; not real, he explains, it's coming from a portable speaker he holds in his hand. His point is well illustrated; hearing is believing. I, for one, several times turned to glare at the noisy latecomers in the row behind me--except they weren't latecomers, they were rustling sounds "placed" behind me by the headphones. We are at once in an auditorium filled with 600 other people sharing the experience of McBurney's Encounter, but thoroughly on our own.

This takes us into the play itself, McBurney's adaptation of Petru Popescu's 1991 novel "Amazon Beaming." This was a retelling of the 1969 encounter of National Geographic photojournalist Loren McIntyre with members of the Mayoruna tribe deep in the Brazilian Amazon. As the piece unfolds we see that the theatricality--all sound, all the time--is not a device grafted onto the piece; it specifically fits the play's examination of reality, meaning and communication.

There is a limit to how much we should describe; it is an event to be experienced, and the less imparted the better. It seems clear that people who are interested in this sort of adventurous theatrical spectacle will love The Encounter (which originated at the 2015 Edinburgh International Festival and was a sold-out hit at the Barbican in London). Other viewers might understandably opine that the emperor has no clothes; he (it) certainly has no scenery.

Or does it? McIntyre's rain forest adventure culminates in a veritable aural tempest, which is enhanced by McBurney-in-motion (as actor rather than narrator) and the combined efforts of lighting designer Paul Anderson, scenic designer Michael Levine, and projection designer Will Duke. So there is stagecraft at play, too. But it is sound designers Gareth Fry and Pete Malkin who are presumably responsible for the binaural wizardry of the piece; think of 3-D for the ears. There are also five sound operators with prominent billing on the cast page, and one imagines that they are key contributors at every performance. 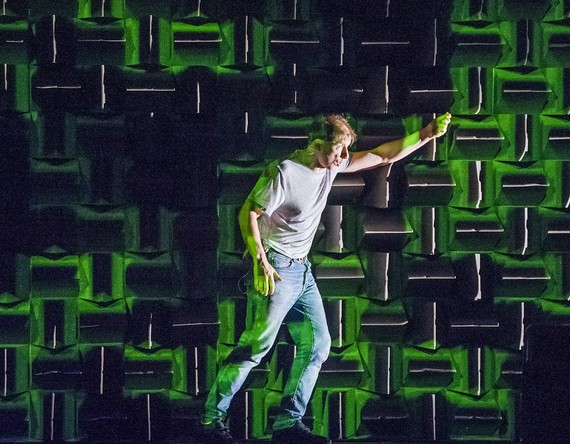 Back in the first decade of the present century, the Tony Awards had a "Best Special Event" category for productions that weren't quite plays nor musicals (a prime example being Elaine Stritch At Liberty). The award died out after it was awarded to substandard attractions--an unwatchable puppet show, among others--simply because they were the only items that fit the category. From 2008 through 2014 there were also awards for sound, which were disbanded apparently because the majority of the voters were unsure of how to judge sound design. (Does that mean it enhances the play or musical? Or that you can clearly hear every word and lyric from your seat, depending on where you're sitting?)

The Encounter perfectly defines the first category, and would be a shoo-in for the second.

.
The Encounter, written and directed by Simon McBurney, opened September 29, 2016 and continues through January 8, 2017 at the John Golden Theatre