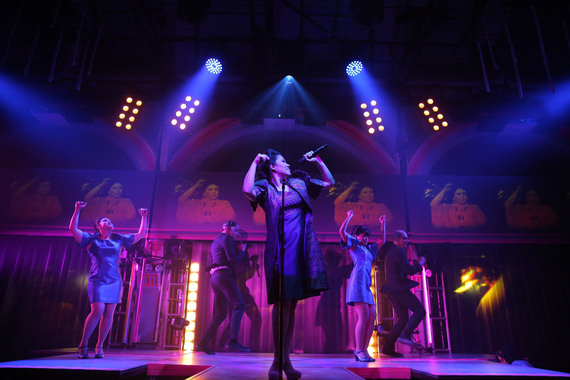 Imelda and Ferdinand Marcos have moved back into the Public Theater, and the verdict is in: Here Lies Love, David Byrne's bull's-eye of a musical about Philippine politics--sex, drugs & disco--is the liveliest, dazzlingest and dancingest show in town.

The show--with concept and lyrics by Byrne, music by Byrne and Fatboy Slim (with Tom Handey and J Pardo)--captivated theatergoers and critics last April during its limited engagement as part of the Public season. A hearty band of producers, after a diligent but fruitless search for a larger and more economically-feasible space in which to launch a commercial run, concluded that there is no place like home and have returned to the Public's ballroom-like LuEsther Theater despite built-in budgetary strictures.

No matter. Here Lies Love should thrive at the Public and proceed to conquer the world. (A second production has already been announced for October as the premiere attraction at the new Dorfman Theatre, within the National Theatre complex in London.) The ticket price is steep for what is technically an off-Broadway show, yes; but this is the most exciting show in town, and one expects that theatergoers will be fighting to get in.

The excellent cast remains virtually the same, and all concerned have ratcheted up said excitement. Ruthie Ann Miles is a marvel as Imelda, growing from the provincial "Rose of Tacloban" to First Lady and world-class celebrity. Jose Llana is even better than before as Ferdinand; more insidious as he works the audience, wooing the ticketbuyers for "votes." (He hungrily seduces as many patrons as he can collar, whispering lyrics into their ear as closed-circuit video plasters their faces throughout the hall.) 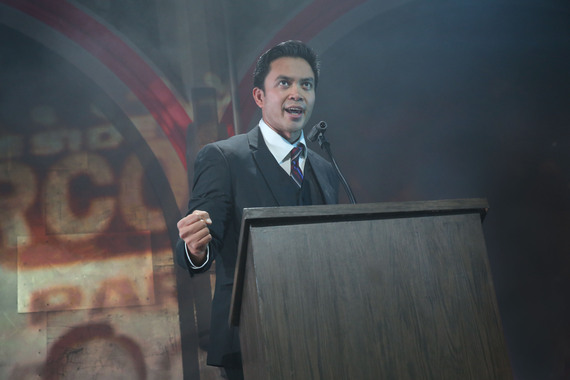 Conrad Ricamora repeats his strong performance as Marcos competitor Benigno Aquino, while Melody Butio scores as Imelda's childhood friend Estrella (and gets one of the finest numbers, "When She Passed By"). Kelvin Moon Loh presides as the DJ-in-a-box above the room; he also takes the stage for the most beautiful moment of the evening, accompanying himself on guitar to lead the finale, "God Draws Straight."

Director Alex Timbers--of Bloody, Bloody Andrew Jackson and Rocky--and choreographer Annie-B Parson have ramped up the production; I may be wrong, but the show appears to be even more high voltage than before. David Korins' scenic transformation of the hall--a key element of the enterprise--seems pretty much the same, albeit with enhanced sets for the smaller scenes. Clint Ramos, though, has clearly been given a walloping budget to rework his costumes, while lighting designer Justin Townsend and projection designer Peter Nigrini appear to have been set loose with a credit card in a technology factory. As a result, everything spectacular about Here Lies Love has been heightened. Mention should also be made of the excellent sound design of M.L. Dogg and Cody Spencer; this is a busy show with the actors scampering across the room, but the words always come through.

Yes, the show is loud, as befits a disco musical; the audience--carefully guided by a band of hard-working techs in hot pink jumpsuits--is literally forced to dodge the continually reconfigured scenic platforms. While this is not exactly an audience-participation show, patrons will at times find themselves literally in the spotlight. The action includes two line dances, but you won't be shunned if you prefer to just kind of stand there. For those who are not mobile, there are a limited number of seats in the shallow balcony surrounding the rectangular space.

That said, this is a show to experience from the floor, where you're in the thick of it; nay, where you are actually part of it. Lest you think this sort of thing might not be for you, let me suggest that the high artistry on display makes this a must-see. Here Lies Love is an altogether revolutionary musical, and theatrical dynamite.

Here Lies Love--with concept and lyrics by David Byrne, music by Byrne and Fatboy Slim--opened May 1, 2014 in LuEsther Hall at the Public Theater