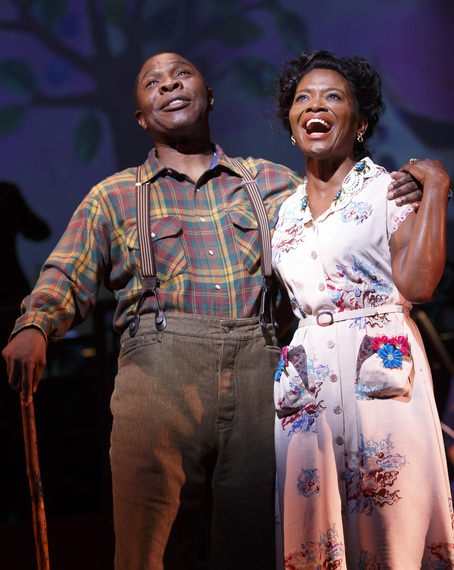 Michael Potts and LaChanze in the Encores! presentation
of Cabin in the Sky. Photo: Joan Marcus
There's "honey in the honeycomb"--and "jelly in the jelly-roll" as well--at City Center this week with Cabin in the Sky. The season-opener from Encores!, this long unseen 1940 musical is remembered for its score by Vernon Duke and John Latouche and the central performance by Ethel Waters. While the individual songs--led by "Taking a Chance on Love" and the title number--retain their musical interest today, the overall score itself turns out to be irrepressibly joyous. Cabin in the Sky has the sort of book trouble that you find in most pre-Oklahoma! musicals, but little matter. Duke's music--along with vibrant choreography by Camille A. Brown and an impeccable corps of dancers--carries the evening, which I suppose we could describe as "heavenly."

Heavenly because the show is built around a battle between good and evil. Petunia (LaChanze, of the original Color Purple) is all good, devout and admirable--albeit with enough spice to show that she ain't no fool. When her husband Little Joe (Michael Potts of The Book of Mormon) is killed in a dice game, Lucifer, Jr. (Chuck Cooper of The Life, resplendent in devilish red) and the white-winged Lord's General (Norm Lewis of Porgy and Bess) fight over Joe's soul. The compromise is that he'll get another six months in which to prove his repentance and attain the stairs to that proverbial cabin in the sky.

This leaves us with a somewhat flimsy tale; what's more, Lynn Root's book is further reduced by adaptors Ruben Santiago-Hudson and Jack Viertel, who have necessarily tempered some of the simplistic stereotypes that were deemed inoffensive at the time. But no matter. The score is anything but simplistic. Duke was trained in Russia until fleeing after the Revolution as a teenager to settle in the United States. (This same route was followed by the show's original director/choreographer George Balanchine and designer Boris Aronson; while the all-black cast struggled through rehearsals, they were often startled by a cacophony of argument in Russian.) This distinctly non-American flavor helped give the original Cabin in the Sky a fantastical flair. 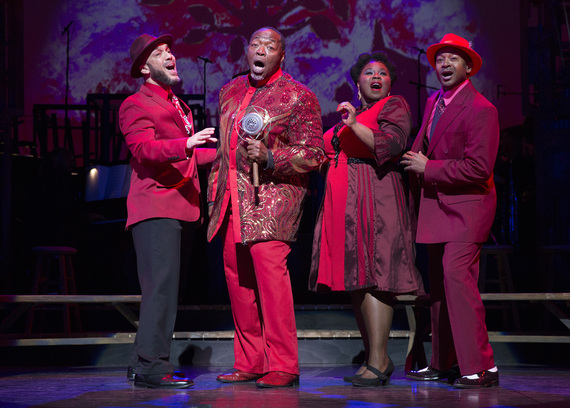 Chuck Cooper (second from left) and Henchmen
in the Encores! presentation of Cabin in the Sky. Photo: Joan Marcus
Duke had an active Broadway career, with more than a dozen musicals, but his work was often a little too complex for popular consumption. (Aside from the Cabin songs, he is best known for "I Can't Get Started"--from Ziegfeld Follies of 1936, which Encores! presented in 1999--and "April in Paris.") In Cabin, he is in a merry mood. While he occasionally reflects the religious aspects of the plot--the score incorporates two traditional spirituals--the composer repeatedly explodes into jaunty refrains. "Taking a Chance on Love" and "Cabin in the Sky" come early in the proceedings, but the musical merriment is carried over into such songs as "Do What You Wanna Do," "In My Old Virginia Home (on the River Nile)," "It's Not So Bad to Be Good," "Love Me Tomorrow" and "Honey in the Honeycomb."

Interpolated to the score is the Harold Arlen-E.Y. Harburg "Happiness Is Just a Thing Called Joe," which was added to M-G-M's 1943 film version (produced while Duke was off in the Coast Guard). While Encores! does not typically include such non-authentic additions, Artistic Director Viertel reasons--with the approval of the various authors' estates--that the song merits inclusion.

As is not uncommon with Broadway musicals which were not widely reproduced, the orchestrations long-ago disappeared. Encores! has alleviated this by commissioning a remarkably colorful new set from Jonathan Tunick, with music director Rob Berman leading a band of thirty-one. Also impressive are the replacement vocal arrangements by Linda Twine, in the style of original arranger Hugh Martin. The chorus sounds especially good, with the spiritual "Dry Bones" easily ranking among the top musical numbers of the affair.

The cast is buoyed by the two character men. Cooper gives another of his velvety-naughty performances, matched by the nobly strong-voiced Lewis. Both score with their respective bad vs. good set pieces, "Do What You Wanna Do" and "It's Not So Bad to Be Good"; and both enliven the scene, although the staging more or less strands them on matching thrones on opposite sides of the stage. Potts carries off his role as the sinnin' husband with a smile (and without falling into the trap of stereotype), while Carly Hughes--as the sultry vamp Georgia Brown--is sultry indeed. Standing out from the dance ensemble with a major solo is Bahiyah Hibah. 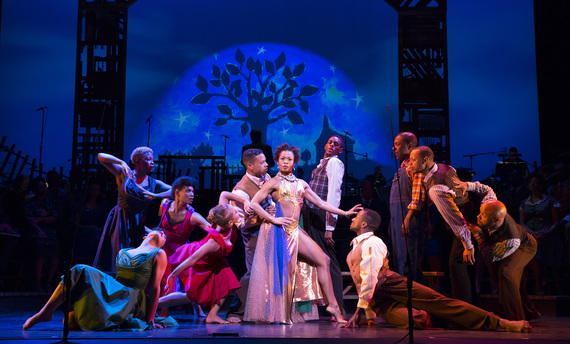 Bahiyah Hibah (center) and dancers
in the Encores! presentation of Cabin in the Sky. Photo: Joan Marcus
That leaves us with LaChanze in the leading role. Let us say, simply, that the show was created for the larger-than-life Ethel Waters, and LaChanze is not larger-than-life. The book climaxes with a scene in which the holy-and-pure Petunia is called on to doll herself up and out-vamp the neighborhood vamp. Ethel--who started out as a singer who knew just how to sell sex--had it in her; LaChanze doesn't.

If one of the goals of Encores! is to give audiences a chance to hear forgotten Broadway musicals that are unlikely to be mounted in full-scale revivals, this is a perfect candidate. It turns out that Cabin in the Sky is well worth a hearing, and Encores! has polished it into a honey of a show.
.
The Encores! presentation of Cabin in the Sky opened February 10, 2016 and continues through February 14 at City Center